We can stop this war before it starts! 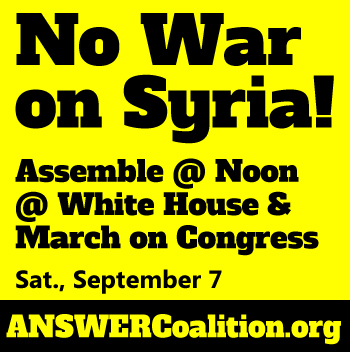 People are coming from all over the East Coast for the March on Washington tomorrow to Say NO War Against Syria. It begins at 12 Noon at the White House followed by a march on Congress.

This war can be stopped!

Congressional offices are being flooded with calls, faxes and emails. Congressional officials report that by a margin of 100 to 1 people are telling the elected representatives from their district that they should vote NO on the war resolution.

Will President Obama order the planned massive bombing of Syria if the House of Representatives votes No? The Administration is shifting its public presentation on this subject as pressure mounts.

“Obama Has No 'Intention' To Strike Syria If Congress Says No” is the latest headline from National Public Radio.

White House Deputy National Security Adviser Tony Blinken told NPR earlier today that the president has "neither [the] desire nor [is it] his intention to use that authority [to bomb Syria] absent Congress backing him."

Because of the deep split inside the political establishment, what the people do can make a huge difference.

We hope to see you at the White House at 12 Noon tomorrow. Bring friends and family members.

Make a donation if you can’t come because our expenses are huge. Every chartered bus from New York City costs a little more than $2,000.

Let's act together to stop this war before it starts!