We stand with the Bolivarian Revolution 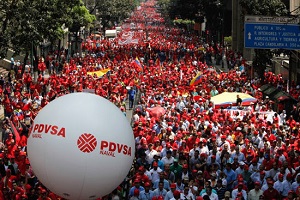 Massive march in support of the government

The ANSWER Coalition extends its full solidarity to the Bolivarian Revolution of Venezuela, President Nicolás Maduro, and the masses of people who are courageously defending their revolution from U.S.-backed violence and destabilization. We demand that the U.S. government immediately end all interference in Venezuela and respect the people’s democratic choice and right to self-determination.

Beginning earlier this month, an extreme, fascist element of the opposition launched a wave of violence aimed at destabilizing the country and provoking a coup to remove democratically-elected President Nicolás Maduro. Demonstrations in support of the government have been attacked, and barricades guarded by armed gangs of opposition supporters have severely disrupted life in many major cities. Many government supporters have been murdered by these gangs, and others have died because of road accidents or being unable to receive medical attention because of the blockades.

The corporate media in both Venezuela and the United States, as well as the U.S. government, have been working hard to spread lies about the character of these demonstrations, in line with their overarching goal of assisting the overthrow of the Bolivarian Revolution. It is critical to understand that these protests do not represent the progressive demands of poor and working people, but the desperate, violent actions of a tiny group in society that is terrified of losing the wealth and power it has accumulated through centuries of exploitation. These groups receive regular infusions of millions of dollars from the U.S. government to keep their isolated organizations alive.

This violence has been exacerbated by what is accurately called an “economic war” being waged by Venezuelan capitalists, who are hoarding goods and inflating the country’s currency to artificially induce inflation and shortages. Again, this is being spun by the global corporate media, which falsely portrays the situation as an economic crisis caused by the government’s policies.

The attempt by U.S. imperialism to overthrow the Bolivarian revolutionary government in Venezuela must be seen in the broader historical pattern of intervention in Latin America. There has not been a single instance in the last century where the United States did not utilize its economic, political and military power in an effort to defeat, subvert or overthrow progressive movements and governments in Latin America.

In 1954, the CIA overthrew the progressive government of Árbenz in Guatemala. In 1961, the U.S. led a proxy invasion into Cuba and has maintained an economic blockade since. The U.S. government supported the fascist military government in Brazil to defeat the left. The CIA led the economic destabilization and eventual overthrow of the socialist Salvador Allende government of Chile in 1973. When the Sandinistas took power in 1979 after toppling the Somoza dictatorship, the U.S. government launched the so-called Contra War until the Sandinistas were finally ejected from power. It was the CIA working with the Salvadoran military that killed tens of thousands in El Salvador. In 1983, the U.S. government invaded Grenada and in 1989 it invaded Panama. Each and every intervention is given a new rationale, but the bottom line is that U.S. banks and the Military-Industrial Complex want to completely dominate Latin America’s land, labor and natural resources.

The ANSWER Coalition is committed to demonstrating our solidarity with the Venezuelan people and their government not only in words, but in the streets. We have already initiated and participated in protests across the country, often confronting supporters of the fascist opposition.

We will continue to take to the streets and demand “U.S. hands off Venezuela!” Long live the Bolivarian Revolution!