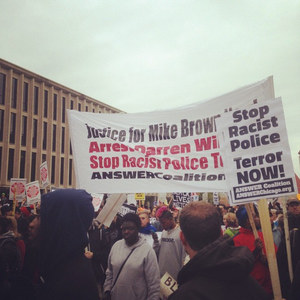 #FergusonOctober took over St Louis, Mo., this past weekend, Oct. 10-13, 2014. With rallies Friday all the way through Monday night, community members, religious leaders, workers, students and people from all over the country converged on St. Louis and the surrounding area. The protests were held in response to the racist lynching of Mike Brown in Ferguson. The protesters demanded the immediate arrest of the murder cop Darren Wilson, who has been protected by the state. The ANSWER Coalition was proud to participate in the weekend’s actions and will continue to stand with our Ferguson sisters and brothers in the streets.

Friday started with protesters rallying in front of St. Louis County Prosecutor Bob McCullough’s office. During the day there were actions across the city in support of Mike Brown. Demonstrators also focused on major events happening in St. Louis, including the Cardinals baseball playoff games, which saw Darren Wilson supporters disgustingly chant his name. Overnight, protesters again made their way to the Ferguson Police Department demanding the immediate arrest of Darren Wilson.

A major march organized by a variety of prominent organizations was held Saturday throughout downtown St. Louis. Over 3,000 people attended. Many speakers recounted their experiences with police repression of peaceful protests, indicative of how the police have treated people in Ferguson for their entire lives. Other speakers challenged the “post-racial” narrative and highlighted the fact that racism is still alive and well; especially within the various police forces that take pride in brutally attacking demonstrations. A contingent of Palestine solidarity activists participated in the march. Speakers from Ferguson continued to thank Palestinians for the advice on dealing with tear gas and other instruments of repression.

On Sunday, the police began arresting people throughout the city who were out demanding justice for Mike Brown. A sit-in at the QuickTrip resulted in a brutal crackdown on protesters and arrests. By the end of the day, 17 more protesters were arrested while the racist killer cop Darren Wilson is free to continue living his life after taking Mike Brown’s in cold blood.

On Monday, arrests continued in Ferguson. The day started with a rally of low-wage workers standing in front of Emerson Electric on West Florissant, demanding economic justice and highlighting the economic dimensions of the war on the Black community. Later on, hundreds gathered at local WalMarts, marching through the store calling for justice for John Crawford, a 22-year-old Black man killed by the police at a WalMart for walking with a toy gun. WalMarts throughout the area began closing down to prevent protesters from getting inside.

Youth held another action in City Hall in St. Louis to let the city know that the struggle would continue. Protesters also went to a Rams football game and dropped a banner that read, “Racism lives here” and “Black lives matter.”

The people showed that business will not go on as usual while Darren Wilson walks free. Every day, demonstrators come out to the streets and get more organized. Justice for Mike Brown and end racist police terror!

View an album of photos from the weekend of resistance below