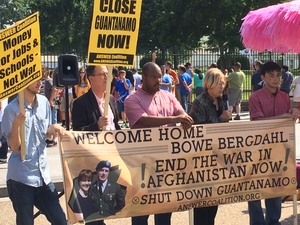 A wide range of anti-war activists gathered outside the White House June 10 to fight back against the right-wing hysteria demonizing recently released prisoner of war Sgt. Bowe Bergdahl, and to demand an end to the war in Afghanistan and the closure of the Guantanamo Bay prison. Sponsors of the rally included the ANSWER Coalition, CODEPINK, March Forward!, Imam Mahdi Bray, Veterans for Peace and Col. Ann Wright. A demonstration also occurred that day in Los Angeles.

Speakers denounced the enormous hypocrisy of the right wing, who endlessly claim that they “support the troops” but engaged in a mad rush to demonize Bergdahl as soon as it was politically expedient. Because Bergdahl was critical of the brutality and senselessness of the war in Afghanistan, and because his return home involved the release of five men held indefinitely in the notorious Guantanamo Bay torture center, he suddenly became a “traitor” rather than a hero.

Eugene Puryear of the ANSWER Coalition opened up the demonstration by announcing that, “We’re here to welcome Bowe Bergdahl home and call for the return of every other U.S. soldier involved in this war that has caused so much suffering.” Imam Mahdi Bray led the crowd in chants of “Welcome home Bowe, close Guantanamo!”

Dr. Margaret Flowers of Popular Resistance drew attention to the relationship between the attacks on the people of Afghanistan and the suffering poor and working people in the United States, saying, “There is also a war going on against the people of this country.”

A large number of media outlets sent reporters to cover the action. While the war mongers have made a lot of noise over the past few days, the people’s voice is beginning to be heard!