Why elections matter -- to the capitalists 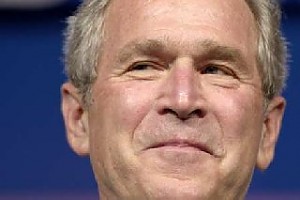 What if there had been no election in 2008 and George W. Bush had remained president?

The following is an editorial from LiberationNews.org, the online publication of the Party for Socialism and Liberation, a steering-committee member of the ANSWER Coalition.

With his approval ratings already at record lows in 2008, imagine if George W. Bush had received a four-year extension to his term of office. Imagine if he alone had presided over the bailout—the largest transfer of wealth in human history—delivering trillions of tax dollars to his friends on Wall Street.

By 2010 Wall Street’s profits begin to recover and the Stock Market is moving steadily upward. With his characteristic smirk, Bush holds a press conference and announces that the recession is over, with millions losing their homes and the unemployment rate soaring. By May 2011, the national employment rate of African American men sinks to 56.1 percent—lower than it has ever been since the government started keeping such statistics 40 years ago. All this has happened since Bush left office, and more.

A few months later, Bush declares that the government is short on money and must make nearly a trillion dollars in cuts to education, housing, health care, transportation, environmental protection, and an assortment of social programs and services that are already stretched thin. He says “everything is on the table” to receive additional cuts, including Social Security and Medicare, within a few months.

Bush declares a pay freeze for federal workers, and then sits back and watches state governments aggressively try to destroy and outlaw public-sector unions—representing teachers, office workers, firefighters, and others.

Imagine Bush in the first few years of his extended term deporting 1 million undocumented immigrants—more than he had in the previous eight years combined.

Imagine if Bush declared immediately upon receiving his extension that instead of bringing troops home from Iraq, he would send them to Afghanistan, where within two years he triples the number of soldiers deployed.

With the population already distrustful of Bush’s “regime change” missions in the Middle East, imagine him leading the country into another war against another oil-rich Arab nation. Imagine him initiating 7,500 bombing missions on Africa.

Imagine how the people of the country would respond if Bush remained in office during all this. Further, imagine if Bush named himself president for life.

There would not only be mass mobilizations, and increasingly militant ones, as all the affected sectors of society came to the realization that they must fight to defend their interests. There would also be the immediate formation of revolutionary groupings among such sectors, and a growing attraction to revolutionary ideology, as the government was recognized as an entity that must be overthrown.

We draw this scenario, in other words, not to say that Bush and Obama are identical politicians, but to explain why the capitalist class holds dear their electoral cycle. It allows them to periodically change their image, give the appearance of choice, while carrying out the same program of class warfare. As billionaire capitalist Warren Buffet admitted in a moment of candor, “There's class warfare, all right, but it's my class, the rich class, that's making war, and we’re winning.”

In fact, democracy in capitalist society is the preferred form of class rule precisely because its conceals the nature of this rule. It obstructs the exploited sectors of society from drawing the revolutionary conclusions needed to overthrow it.

This myth-making cannot hold up forever. As the economic basis for the “middle class” erodes, this will shed light on the stark inequalities, and ruling-class domination, that characterize our society.

Even Forbes magazine—the self-described “capitalist tool”—ran a headline forecasting the “The Coming Global Class War.” Youth unemployment is no better here than in the countries that have recently experienced rebellion and revolution. At present, seeing such a movement here appears very far off, or even impossible; but when it happens, it will appear inevitable.