Why Israel wanted a ceasefire now 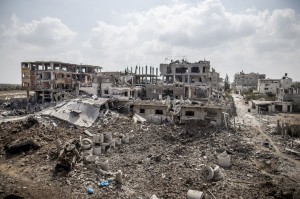 After nearly a month of inflicting death and destruction on Gaza, the Israeli occupation forces withdrew on August 5, as part of 72-hour ceasefire agreement. Negotiations are now underway in Cairo over the terms of a more long-range truce. After subverting previous ceasefires, it is clear that Israeli leaders wanted the latest agreement.

Gaza, whose population of 1.8 million is 80% refugees from other parts of Palestine crowded into an area of just 139 square miles, has suffered more than 1,860 killed and over 9,600 wounded since the Israeli military assault began on July 8. The vast majority of the casualties on the Palestinian side were civilian victims of Israel’s indiscriminate bombing and shelling.

On the Israel side, 67 were killed, all but three soldiers. At least 640 Israel soldiers were wounded. Although the Palestinian losses were exponentially greater, the Israel losses were five times those in the last ground invasion of Gaza in 2008-9.

The U.S.-funded and armed Israeli military deployed a wide range of high-tech air, land and sea weaponry. The Palestinian side has no air force, navy, armored units or air defense system. Thousands of homes were destroyed, schools, hospitals, mosques and Gaza’s only power plant were repeatedly hit. Entire neighborhoods, like Shejaiya in Gaza City were turned into rubble. Most of Gaza has little or no electricity and there are acute shortages of water and other necessities.

The cost to rebuild Gaza is estimated at this point at $4-6 billion, three to four times Gaza’s annual gross domestic product.

While proclaiming their supposed “concern” about civilian casualties, there can be no doubt that Netanyahu and his generals waged a deliberate campaign of terror directed against the population of Gaza as a whole. The repeated bombing and shelling of UN-run facilities in which tens of thousands had taken refuge was neither accident nor mistake. Those attacks were meant to send the message that there was nowhere to run and nowhere to hide, that resistance to Israeli domination was futile and surrender the only option.

It was a campaign of terror carried out by a terrorist state.

It’s the same message that repeated Israeli massacres from Deir Yassin in 1948, to Sabra and Shatila in 1982, to Jenin in 2002, to Gaza in 2014 were meant to convey. But despite the indescribable suffering they have been subjected to over the past century at the hands of imperialism and Zionism, the Palestinians continue to resist.

Why a ceasefire now?

While the Israeli military has once again inflicted unspeakable death and destruction on Gaza, it did not achieve victory, as evidenced by the disarray today inside the Israeli political establishment over the announcement that Israel troops were being withdrawn. A military spokesperson announced that it had “achieved its objective” by destroying 32 military tunnels.

Extreme right wing politicians howled about “not finishing the job.” Typical was Uzi Landau, tourism minister from the Yisrael Beiteinu party, who said “the operation ended with no achievement that ensures quiet.”

The real objective – destroying the Palestinian resistance forces in Gaza – was clearly not achieved.

There were several factors that brought pressure on Israel to claim “success,” announce it was withdrawing its troops, and seek a ceasefire.

1)  Failure to achieve military victory, significant army casualties killed and wounded, and the prospects of a protracted and debilitating campaign.

2)  Intensifying clashes in the West Bank with at least 10 Palestinians killed and hundreds wounded in protests supporting Gaza. On Aug. 4, one Israeli was killed and soldier wounded in attacks in Jerusalem. The Israeli government feared that continuation of the assault on Gaza could lead to a new intifada or uprising in the West Bank, and possibly extending to the Palestinian population inside the 1948 borders of Israel.

3)  Israel’s rapidly deepening international isolation, with many governments condemning the Gaza operation and withdrawing ambassadors, and a worldwide protest movement that brought millions of people into the streets of countries around the world.

4)  Growing criticism by the U.S. government, Israel’s principal funder, armor and protector, of Israel’s blatant attacks on civilians. While the U.S. continued its political and military support – including an emergency re-supply of ammunition – the Obama administration was increasingly concerned about being so closely identified with the Israel’s terror campaign, and the prospect of new mass upheavals in the region. In an unusually strong criticism, on August 4 White House spokesperson Josh Earnest described the latest Israeli shelling of a UN school housing 3,000 refugees as “appalling” and “disgraceful,” labels usually reserved for enemy governments.

His thuggish “no one can tell us what to do” rhetoric aside, Netanyahu is no more immune to objective forces than any other political leader or regime. The combination of facts on the ground in Gaza, in Occupied Palestine as a whole, and in the world compelled the Israeli government to take a step back, at least for the time being.

There is no guarantee that a longer term ceasefire will be reached. All those who stand for justice for the Palestinian people must remain on alert, and continue the struggle to immediately end the blockade of Gaza and force the U.S. and Israel to provide reparations. In the long run, real self-determination demands the right of return for all Palestinian refugees, and an end to the Israeli apartheid system.