Why rebellions are sweeping the Middle East, Africa and Asia 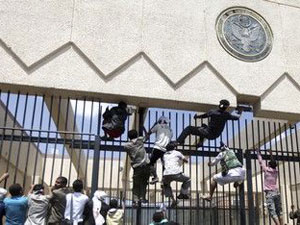 U.S. Marines have been sent to Libya and Yemen. U.S. drones dominate the air space of Libya.

Until NATO bombers destroyed its government last year, Libya was a truly sovereign country. No one can make that claim now. It will be the Pentagon and CIA who will determine what should be done in Libya in pursuit of those whose demonstration at the U.S. consulate in Benghazi led to the death of the U.S. ambassador and three other Americans.

The Libyan revolution led by Colonel Qaddafi evicted the Pentagon’s important Wheelus Air Force Base from the country in 1970.

But the Pentagon is back now. Some things seem not to change. The U.S. Marine’s first foreign expedition was in 1806 and the battleground was Tripoli.

“From the halls of Montezuma, to the shores of Tripoli, we fight our country's battles in the air, on land, and sea.” This begins the official hymn of the U.S. Marines Corps, enshrining the history of U.S. expansionism. The U.S. Marine Corps is staying true to that hymn today, as Marines set sail yet again for the coast of Libya, as well as Yemen—putting elite special operations units of U.S. troops in two new countries in a matter of two days.

The Marines don’t actually fight for “our country” as the hymn exalts. This is just patriotic propaganda. It is endlessly repeated, but that doesn’t make it true. They are being sent to the Middle East to shore up the position of the Empire as rebellions sweep the region.

As Marine General Smedley Butler, who won two Congressional Medals of Honor, famously put it when he retired and became an anti-war proponent:

I spent 33 years and four months in active military service and during that period I spent most of my time as a high class muscle man for Big Business, for Wall Street and the bankers. In short, I was a racketeer, a gangster for capitalism. I helped make Mexico and especially Tampico safe for American oil interests in 1914. I helped make Haiti and Cuba a decent place for the National City Bank boys to collect revenues in. I helped in the raping of half a dozen Central American republics for the benefit of Wall Street. I helped purify Nicaragua for the International Banking House of Brown Brothers in 1902-1912. I brought light to the Dominican Republic for the American sugar interests in 1916. I helped make Honduras right for the American fruit companies in 1903. In China in 1927 I helped see to it that Standard Oil went on its way unmolested. Looking back on it, I might have given Al Capone a few hints. The best he could do was to operate his racket in three districts. I operated on three continents.

What is the real role of the U.S. military in the Middle East?

U.S. troops and aircraft are dispatched again in the Middle East today. For the past half century, this pattern has been repeated time again.

When the Iraqi people carried out a truly revolutionary overturn in 1958 against the British-backed monarchy in Baghdad, President Eisenhower rushed 10,000 troops to Lebanon and the British sent troops into Kuwait. The troops were to secure the position of the colonial powers against indigenous revolutions from the people of this oil-rich region. For the British, of course, its stakes in Kuwait were similar to its stakes in Hong Kong. Both were artificially carved, colonial-administered port areas taken from their mainland for the benefit of the colonizers at the expense of Iraq and China, respectively.

Is it any wonder that there is smoldering anger today at the United States and the former colonizing powers?

Angry protests targeting U.S. and other western embassies and businesses swept across the Middle East, Africa and South Asia on Sept. 14. The widespread demonstrations followed attacks on U.S. embassies in recent days in Egypt, Yemen and Libya, where the U.S. ambassador and three other U.S. personnel were killed on Sept. 12. The Sept. 14 protests, took place in many countries, including Egypt, Nigeria, Mali, Palestine, Lebanon, Syria, Iraq, Malaysia, Bangladesh and Pakistan, with embassies breached in Libya, Yemen, Tunisia and Sudan.

The trigger for the demonstrations was the internet circulation of a deliberately offensive and insulting film produced in California about Mohammed regarded by Muslims as prophet and founder of the Islamic faith. As insulting and inflammatory as the film is, the widespread and militant response it can only be understood by taking into account the historic role of imperialism, which has left a deep reservoir of anger toward the United States, Britain, France and the other colonizers.

Among the actions of the United States are: the invasion of Iraq, support for brutal military dictatorships and royal monarchies, arming and funding for Israel in its non-stop war against the Palestinian people, the overthrow of the democratic government in Iran in 1953, the installing of client police states, notorious illegal torture, the genocide in Iraq over 20 years, military occupations, and now skies buzzing with robotic killers who blow up civilians—and then their funerals—on a regular basis. This backdrop of colonial violence gives some insight as to why small sparks can create region-wide upsurges against the perpetrators of those crimes.

The shock and surprise of the U.S. government at the embassy protests shows its imperial arrogance, believing it can act as a wrecking ball in the region, bombing and occupying countries, without triggering a response from the victims.

The ANSWER Coalition has been organizing for over a decade against the military operations of the Empire in the Middle East.

Join us and others in locally coordinated anti-war demonstrations on Oct. 6 and 7, which will mark the 11th anniversary of the invasion and occupation of Afghanistan. Tell your friends and family to join a protest in your area (see calendar below) or let us know of a protest in your area so that it can be posted on the ANSWER Coalition website.