Report from protests against Netanyahu: 'Public opinion about Israel is changing irreversibly' 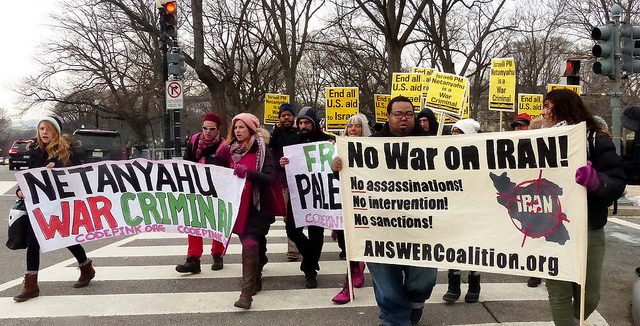 View a slideshow of photos from the protest. Thanks to ANSWER volunteer Phil Portluck for taking them!
Statement from Brian Becker, Director of the ANSWER Coalition 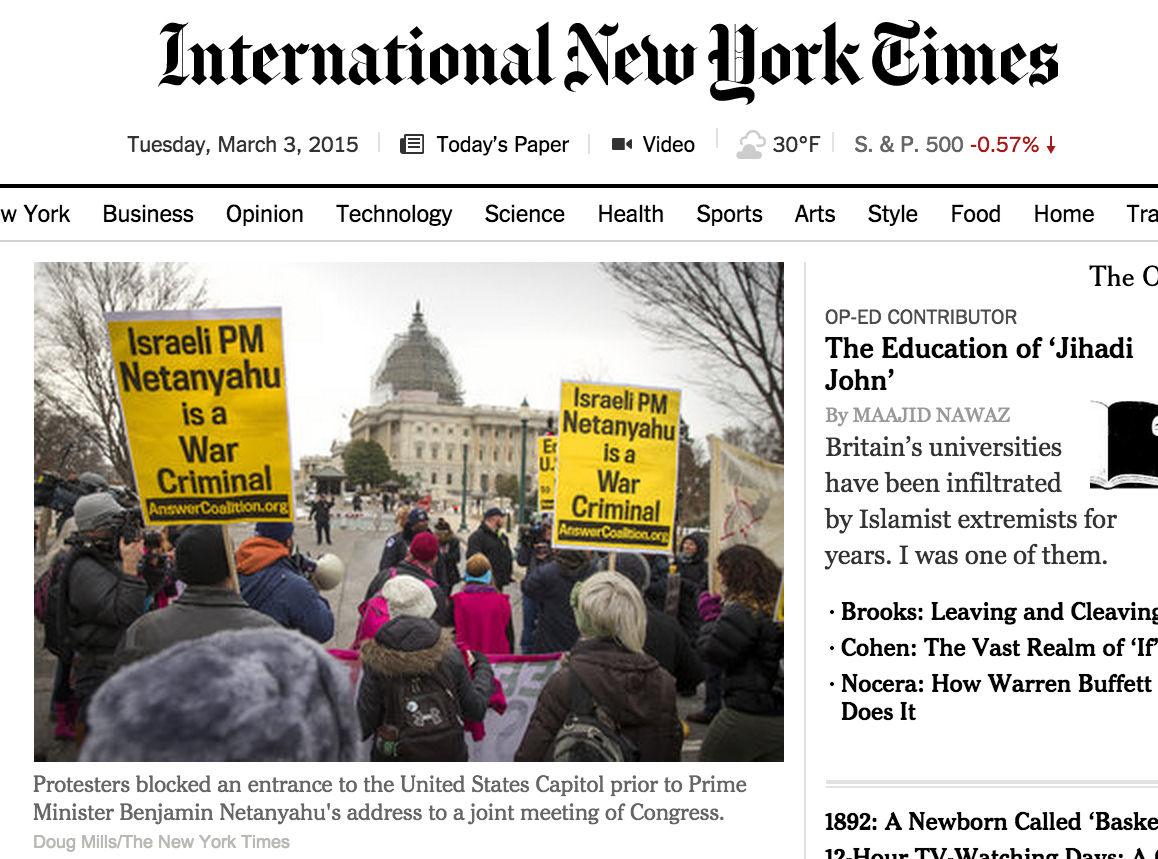 Outside, in the streets surrounding the U.S. Congress, a strong, spirited crowd of demonstrators denounced Benjamin Netanyahu for committing war crimes against the Palestinian people and for attempting to whip up a war fever against Iran. We were met by police lines and cops who grabbed and shoved people as they attempted to exercise their Constitutional right to protest at Congress.

Inside, from within the hallowed halls, Netanyahu was given a boisterous two-minute-long standing ovation by the millionaire politicians in Congress.

The irony of what happened today speaks volumes about the nature of democracy in this country.

Netanyahu was treated as a visiting hero in that cesspool of corruption that he labeled “the greatest legislative body” on earth. These bought-and-paid-for politicians genuflected and congratulated his every platitude.

The timid, mild voices of criticism from the Obama White House and its supporters in Congress for Netanyahu’s and Boehner’s “violation of protocol” were drowned out in ovation after ovation.

The only place where the actual voice of the American people could be heard was in the streets.

More than 63 percent of the people thought Netanyahu's speech should have been cancelled. There is a sea change happening inside of U.S. public opinion, which is increasingly opposed to U.S. support for every Israeli aggression. This dramatic shift in public opinion is also registering very profoundly among Jewish-Americans, who are increasingly outspoken in opposition to Israeli policies.

Thirteen years ago, 100,000 people protested in Washington, D.C., in support of Palestine when the Israeli Defense Forces reinvaded the West Bank. That massive demonstration against Israel was the first of that magnitude. Since then, this new movement has broadened, widened and extended its influence.

Instead of supporting Israel there developed mass demonstrations inside the United States when Israel went to war against Lebanon in 2006, invaded Gaza in 2008, bombed Gaza in 2012, and launched its massive slaughter in Gaza last summer.

Public opinion about Israel is changing irreversibly inside the United States. The negative impression of Israel will grow because of Netanyahu's arrogant speech today. The fawning opportunists in Congress don't reflect the views of the people. Netanyahu's gross performance before Congress today will be remembered at best as an ephemeral triumph for his electoral effort back home. But its lasting significance is that it will further erode support for the Israeli government among an ever-larger segment of the U.S. public that is learning year by year and day by day that the Israeli government more resembles the old South African apartheid regime rather than the idyllic picture that is spoon-fed to the people by the corporate-owned media.

We will continue to organize, mobilize and counter the lies of the Israeli propaganda machine and the U.S. mainstream media, which works as an echo chamber for its falsehoods and lies.