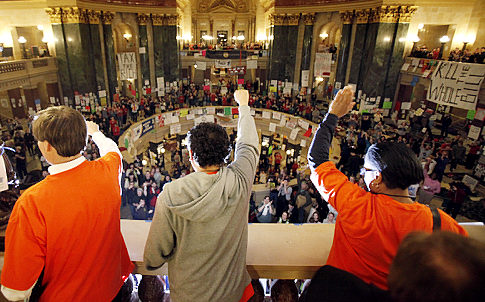 Hundreds of protesters in Madison stood together on Feb. 27 and defeated a government attempt to end the student and worker occupation of the capitol building. At 4 p.m., they refused a police order to leave the capitol, and forced the police to give in to the protesters. The occupation continues.

The unions are calling on people to come to the capital in order to keep the occupation going until the bill is defeated.

The occupation of the government building, which has been central to the uprising against the anti-union and anti-worker budget bill, is now in its 13th day. Tens of thousands of students and workers have occupied the capitol building for the last two weeks.

A wave of mass demonstrations has taken place in Madison and all over Wisconsin. On Feb. 26, 150,000 workers descended on Madison in the largest demonstration yet. Large solidarity protests were held in all 50 states on the same day, including 2,000 in Chicago on a chilly winter day.

On March 1 there will be a mass demonstration in Columbus, Ohio to defeat another union-busting budget bill. Days of protests continue in Indiana to defeat a budget bill there.

The labor struggle in the Midwest has drawn millions of workers into the fight against an assault by the business elites and their political representatives to smash public unions in the United States. Continued support of the workers and students in Wisconsin, Ohio, Indiana and in others state where the unions are under attacks is extremely important at this critical juncture.