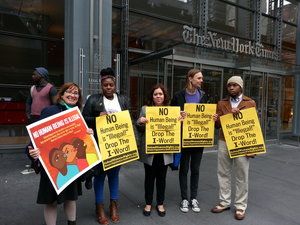 Reprinted from Women Organized to Resist and Defend

On Tuesday April 23, NYC WORD organizers joined dozens of protesters outside of the New York Times building to demand the end of the publication's usage of the term "illegal" when referring to undocumented immigrants. Organizers in ARC (Applied Research Center) initiated a petitioning campaign to demand the New York Times to drop the I-word, and on Tuesday presented over 70,000 petition signatures to the publication.

Protester expressed their outrage for the NYT "reconsideration" approach toward the usage of the term illegal, despite several major media outlets like CNN, NBC, the Associated Press, ABC News and USA Today that are no longer using the term “illegal immigrant” to refer to undocumented immigrants in the United States.

The term "illegal" is used to criminalize and marginalize undocumented workers, who leave their homeland as a result of global economic and political policies outside of their control. If these policies are considered legal, and in fact celebrated, it is the height of hypocrisy to then turn around and criminalize immigrant workers. WORD believes that every worker who makes the difficult decision to migrate must be entitled to full legal rights and equal protections.

WORD (Women Organized to Resist and Defend) recognizes that our current immigration policy only serves to split up families and fuel deportations and mass incarceration. We say that immigrant rights are civil rights and women's rights! Join us, and let’s mobilize all our resources for a powerful people’s movement that says “No human being is illegal! Full rights for all!”