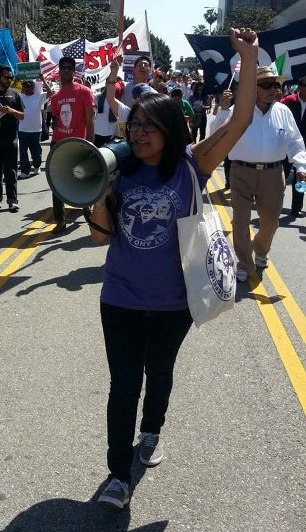 On July 23, the City Council of Bell, California, voted in favor of the Salvation Army’s request to receive federal funding to shelter around 150 immigrant children from Central America while the children wait to be deported. WORD activists and volunteers from Los Angeles attended the City Council meeting to speak in support of the initiative.

A majority of the residents were in favor of opening the Salvation Army’s doors to shelter these children, who would stay for about 30 days at a time while they await deportation, but there was a small group who opposed the proposal. It was surprising to see that the group of people who were against sheltering these children were mostly women, and mostly from the Latino community. To ignore the fact that immigration is not a women’s issue would be absolutely wrong.

As I sat in the meeting I could not believe what I was hearing, especially in an immigrant, Latino community. Many blamed the parents of these immigrant children as being irresponsible and bad parents for allowing their children to make the dangerous journey to the United States alone. Others suggested that immigrant women and the women from these countries simply stop having children. Who are we to tell women to stop having children? This is not only demeaning but this absolutely does nothing to solve the immigration problem.

After the meeting, a group of women approached us telling us that we should stop having children, asking what kind of people would consciously have children in oppressed countries just to continue the "cycle of poverty." One commented that poor people just end up having poor children. It is not simply women's fault if we are poor, it is the lack of resources available to us and our families that makes it difficult to provide a decent life for our children. Women have every right to have children if we choose to. The reason why these particular women and families make the hard decision to send their children to the United States is because they have no other option.

It was sad to witness such racist, anti-immigrant sentiment. People were attacking immigrant women for having children in the United States, thus making their U.S.-born children citizens. What these women failed to realize is that even here in the United States, contraception and safe abortions are rights that are being taken away. Contradictory statements that immigrant women shouldn't have children, yet not supporting access to contraception only causes confusion and pits women against each other. Now is when we as women have to unite and not turn our backs on each other. Many immigrant women live in low-income communities where funding for family programs are the first to be slashed. We should all have equal access to contraception, we should all – regardless of status – be able to have the right to choose whether to have children or not. It is not up to these racists to decide whether immigrant women should have children, it is a decision that every woman has a right to make by herself.

WORD stands with the children from Central America and their families. We will be there with open arms when they arrive to the City of Bell and we hope that those in the Los Angeles area will stand with us and show these children and the immigrant community that they are not alone. We recognize that no woman can be free while others are oppressed. Immigration is a women's issue!