WORD stands with the people of Palestine 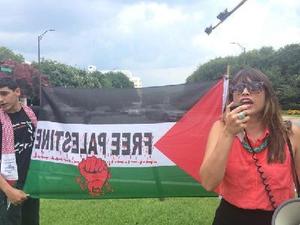 WORD organizer Karina Garcia speaks at a protest against the Israeli assault on Gaza in Tallahassee, Fla., July 26. 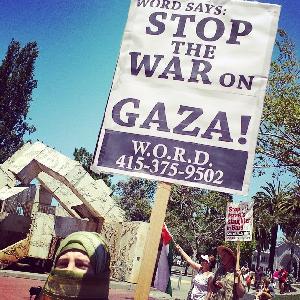 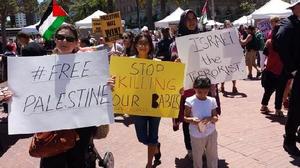 Over the past month, Israel has carried out an all-out aerial assault and ground invasion of Gaza, as the seven-year inhumane and illegal siege has continued.

Israel's latest massacre in Gaza has killed almost 2,000 men, women and children. More than 8,500 have been wounded. Israel has carried out a nonstop military assault against an occupied people under the flimsy excuse of ending rocket fire from occupied land.

The assault is an all out racist, genocidal attack on the Palestinian people. In just one example of the mindset of the Israeli government, Ayelet Shaked, a member of the Israeli parliament, called for the targeting of Palestinian mothers. She said, "They have to die and their houses should be demolished so that they cannot bear any more terrorists. ... They should go, as should the physical homes in which they raised the snakes. Otherwise, more little snakes will be raised there." If that wasn't bad enough, Dr. Mordechai Kedar, a prominent Israeli thinker, "academic expert" on Palestinian populations and former military intelligence expert, recently claimed publicly that raping Palestinian women and girls would deter "suicide bombers."

Despite the escalations and the brutality of the assaults, as well as the intensifying hate speech in mainstream Zionist rhetoric, all U.S. Senators unanimously passed Senate Resolution 498 to give full support to Israel's actions.

The United States government gives Israel over 3.1 billion dollars EACH year in "aid." Israel uses that money for its military and industrial development, facilitating the blockade of Gaza—denying the people access to everyday necessities like clean water and electricity. While the U.S. supports Israel with billions, people in Detroit are facing a water shutoff.

We understand that the support the United States is giving to the blatant, systematic genocide perpetrated by Israel is proof that the government does not care about the well-being of women, children or any innocent civilians. This humanitarian rhetoric is only used to support an agenda of U.S. capitalist expansion around the globe.

We demand that all U.S. aid to Israel be stopped immediately. Stop the assault in Gaza! End the colonial occupation of Palestine!

We urge WORD supporters to join protests in support of Palestine in their area. WORD recently joined the Aug. 2 National March on Washington, and we'll continue to come out in the coming weeks. We know no woman can be free while others are oppressed. Let's stay in the streets!