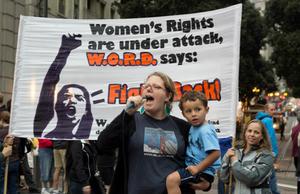 Many of us in WORD are mothers in the struggle. We recognize the challenge mothers face in today's society, where women bear the brunt of responsibility for child rearing and childcare while food, education, health care, a job and housing are not considered rights.

Whatever the gender of the parent or parents, raising children in the United States is treated as an individual or nuclear family issue, and not viewed as a collective social responsibility. For mothers in general, and single mothers in particular, the individual responsibility becomes a significant burden.

The wage gap between men and women without children in the United States is 7 percent. Add a single child into the mix and that gap jumps to 23 percent. Sixty-five percent of a U.S. family's seccond wage is spent on childcare. For single mothers, and 40 percent of us are single mothers, childcare expenses come out of a single income (Forbes, 2013).

The all-out assault on social services has had a disastrous impact on working families—and particularly those led by single mothers.

In the mid-to-late 1800s, different groups of women celebrated special mother’s days that ranged in their purpose and organization. In 1858, Anna Jarvis organized mothers’ work days to improve sanitation with the aim of lowering infant mortality and better community health. In 1872, Julia Ward Howe—a suffragist and pacifist—established a special mother’s day for peace that continued for several years.

The official U.S. holiday was adopted in 1914 when Congress passed a Mother's Day resolution. The official holiday was the result of Anna Jarvis's daughter, also named Anna Jarvis, who spent many years advocating for a special day for mothers. Jarvis insisted that it be for one's personal mother, not mothers in general. By the time it was officially adopted, the day had been stripped of almost all association with anti-war sentiments or community service. It rapidly became a highly commercialized day, profitable to a variety of corporations and used by organizations—from pro-war to charitable groups—to raise funds.  Jarvis herself then spent every penny she had fighting the commodification of the Mother's Day she had initiated.

During the same period that Jarvis was building support for Mother's Day, International Women's Day was proposed by working women's organizations in the United States and then in an international conference that met in Europe as a day to celebrate women's contributions and build the struggle against women's oppression. In 1913, the year before the United States Congress officially decreed Mother's Day as a holiday, IWD was moved to March 8—a day that is celebrated worldwide.  Instead of isolating one group of women that have become parents, International Women's Day is a day established by working women from many different countries to celebrate the struggle of all women for full equality.

Mothers deserve to be recognized for the work they do for their families—countless hours of unpaid work. But motherhood—producing and caring for children—is often venerated as the ultimate achievement for women, that which gives them value as human beings and members of society.

In “Why I hate Mother’s Day” author Anne Lammott aptly writes, “Mother’s Day celebrates a huge lie about the value of women: that mothers are superior beings, that they have done more with their lives and chosen a more difficult path," (Salon.com, 2010). Placing such high value on motherhood implicitly alienates families that may not have a mother figure--families with two dads, single fathers or families that have lost a mother for some reason or another.

In reality, all women face the profound effects of institutionalized sexism, of living in a patriarchal society that denies us equal access to jobs, education, housing and more.

We take this Mother's Day to salute all of the women who have been our mothers in the struggle, and all mothers in their struggle to provide for themselves and their families as best they can. WORD would also like to invite mothers to join us as we struggle for full equality for all women.

We are mothers in the struggle -- Join us!

Tell us why you fight back & send your photo to mamas@defendwomensrights.org