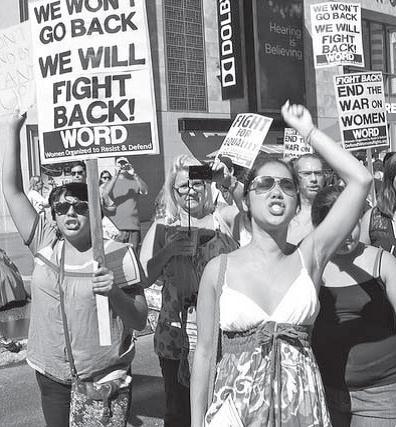 On May Day, or International Workers Day, thousands of people in cities across the country and millions across the world will take to the streets. Women Organized to Resist and Defend (WORD) is joining rallies and marches across the United States because we believe worker's rights are women's rights.

In 2006, the mass immigrant rights movement that defeated the fascist Sensenbrenner bill revived May Day as a day of struggle in the United States. One of the most oppressed groups of working people, undocumented workers, and their supporters took the streets in the millions to stop the attacks on workers. While the Sensenbrenner bill was defeated, the attacks on immigrant workers continue. May Day continues to be a day to fight for the rights of immigrant workers, and thus for all workers.

Immigrants’ rights are women’s rights too. There are millions of undocumented women living and working in the United States.

While reasons for immigration vary, we recognize that often it is systemic economic and political forces that compel women to move to the United States. Many women come to the United States to escape poverty and violence. But, due to draconian immigration laws, they find themselves especially vulnerable to poverty, violence, exploitation, racism and abuse in the United States. Undocumented women want the same things all women do: decent jobs with fair wages, educational opportunities, child care and access to health and reproductive services. All women deserve these. All women deserve equal rights, regardless of race or nationality.

Under the Obama administration, more than 1 million people have been deported. There were 409,849 deportations in 2012 alone. These aren’t just numbers on a page. These are hundreds of thousands of families that have been torn apart. Hundreds of thousands of mothers, sisters, grandmothers and aunts—many people who had been living and working in the country for decades—have been torn away from their children and their homes.

And what happens to the children left behind? There are currently at least 5,100 children living in foster care who are prevented from uniting with their detained or deported parents. This number is expected to triple in the next five years if nothing is changed. WORD is calling for an end to the raids and deportations that break up families and serve to keep our communities living in fear.

For too long, legal barriers have kept undocumented women from attaining decent employment, forcing many women into terrible working conditions. Undocumented women are viewed as a source of cheap labor for employers. They are extremely vulnerable to abuse by employers, who use their immigration status as a tool to keep immigrants from demanding more pay, respect or safety provisions.

These same legal barriers keep women from accessing crucial legal and social services. Undocumented women who want to report domestic violence, sexual assault or who want to leave an abusive home situation have to face the real possibility of legal or economic reprisals against them.

LGBT immigrant workers also face an added layer of exploitation and discrimination because of the denial of marriage rights as well as bigotry and police brutality that targets lesbian, gay, bi and transgender people. No woman should have to face the choices that some undocumented women are forced to make, often choosing between their family, their home and their physical safety and survival.

WORD fights for the rights of all women. We believe in equal rights for all. Every woman should have access to a good job, education, social programs and health services. Every woman deserves the right to live without fear, whether it be fear of sexual assault or fear of the INS. No person is illegal.

Justice and equality for all!