Worldwide outrage at assassination of Marielle Franco in Brazil

The cold-blooded execution of Rio de Janeiro’s city council representative Marielle Franco has sent Brazilians into the streets in an outpouring of grief, outrage — and fight back.

Events in solidarity and demanding justice also took place around the world. In Washington, D.C., Brazilian Expats for Democracy and Social Justice organized an event at the White House on March 16, and then co-organized a vigil at the Brazilian Consulate with BYP 100 on March 21.

Please see below for photographs from the March 16 event at the White House organized by Brazilian Expats for Democracy and Social Justice, and an article with more information about Marielle Franco. 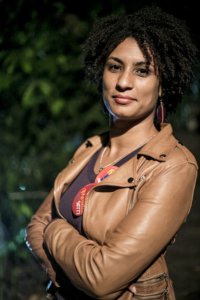 The cold-blooded execution of Rio de Janeiro’s city council representative Marielle Franco has sent Brazilians into the streets in an outpouring of grief, outrage — and fight back.

The Wednesday night killing left Franco and her driver dead. Franco had just left an event on empowering Black women.

On Thursday, thousands protested at Cinelândia square and elsewhere in downtown Rio. Thousands more closed Avenida Paulista in São Paulo. Demonstrations have taken place in the capital Brasília and in virtually all major cities across the Brazil, along with solidarity demonstrations in New York, Lisbon and other cities across the world. Countless displays of support have flooded social networks.

Franco’s life and personal struggle reflected the realities of millions of impoverished and marginalized residents of Rio de Janeiro. A Black woman and a single mother, she was born and raised in Favela da Maré, one of the poorest and most violent communities in Rio de Janeiro. Franco started working at 11 years of age, eventually overcoming great odds to earn a degree in Social Sciences and a masters in Public Administration. She was a human rights activist, a member of the LGBTQ community, a feminist and anti-racist fighter.

Her election to Rio’s Municipal Chamber in 2016 took the political establishment by surprise. Running with the left party PSOL (Socialism and Liberty Party) as a first-time candidate, Franco came in fifth in number of votes among the 51 elected members of the legislative chamber. Her stunning victory brought an earnest and courageous voice for the oppressed into a political arena dominated by representatives of Rio’s wealthy and mostly white elites. She was beloved by the communities she represented and admired for her principles.