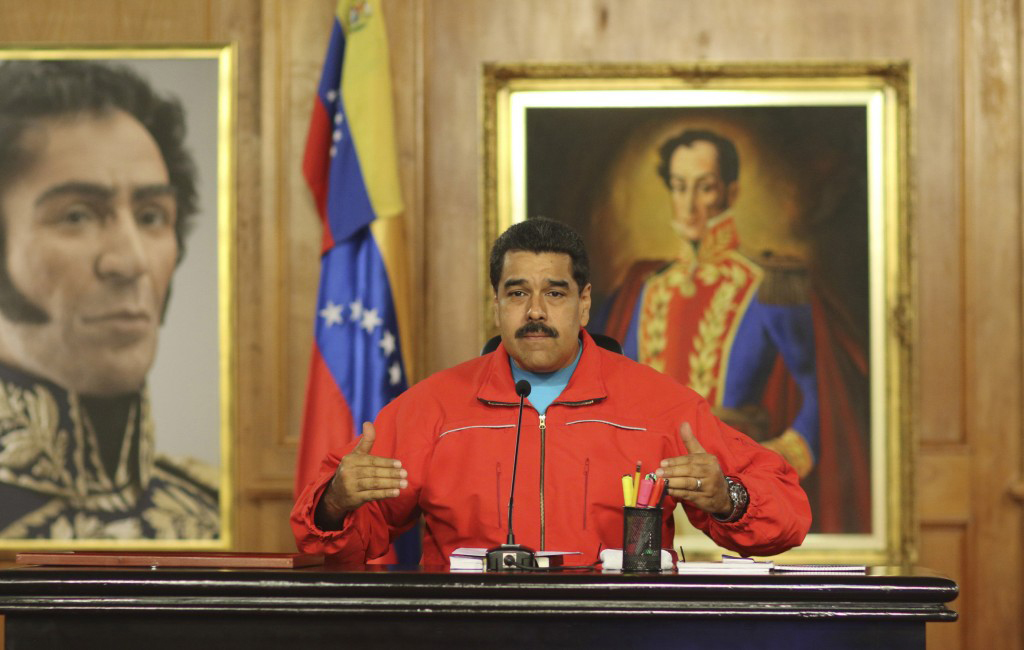 Imperialism is waging an economic war against the Venezuelan revolution. We need to stay in the streets as the revolution enters a new, critical stage following the recent electoral setback. The outcome of the December 6, 2015, National Assembly elections in Venezuela is a major victory for the right-wing forces of counter-revolution and U.S. imperialism, and a severe blow to the governing United Socialist Party of Venezuela (PSUV) and the Left in Latin America.

But it is not a historic defeat of the Left in the sense of the 1973 Pinochet/CIA coup in Chile or Hitler’s 1933 rise to power in Germany. In those and other counter-revolutions, the communist and socialist parties, labor unions and all progressive forces were crushed.

Despite its electoral defeat – in the midst of a severe economic crisis — the PSUV retains a strong mass base, the presidency and other important government positions on both national and state levels, and considerable support in the armed forces.

[Since this article was initially published, the opposition coalition, the “Democratic United Roundtable” (MUD), has won 109 of 167 seats in the National Assembly to 55 for the PSUV. Along with three Indigenous legislators who are aligned with the right wing, this secures the opposition a two-thirds majority, which gives them additional legislative powers.]

More than 50 national and regional parties belong to the MUD – including several with “socialism” or “green” in their names — but it is dominated by the COPEI (Christian democrats) and Acción Democratica (social democrats), the two historically dominant parties of the Venezuelan capitalist and upper middle classes. The MUD leaders have made it clear that they intend to overturn many of the social gains of the Bolivarian Revolution.

If the MUD wins at least 111 seats, it would be in a position to re-write the progressive Constitution approved by more than 78 percent of voters in 1999, and push for a referendum in 2016 to remove President Nicolás Maduro of the PSUV from office.

Maduro succeeded Hugo Chávez as president in 2013, following the late leader’s tragic death. Chávez first took office in 1999 and was the initiator of the Bolivarian Revolution that dramatically improved life for millions of poor people inside the country and elevated the anti-imperialist struggle in Latin America.

In his speech following the December 6 election, Maduro pledged to continue the struggle. “The opposition hasn’t won, a counterrevolution has won . . . We have lost a battle today but the fight for a new socialism has barely begun,” said Maduro. “We see this as a slap to wake us up to act . . . We lost a battle, but the struggle for socialism and a new society begins now . . . It is time for a rebirth.”

Diosdado Cabello, president of the National Assembly, and First Vice-president of PSUV, said in statement:

“Pain and sorrow was losing our Eternal Commander [Chávez]. Losing the election was simply a stumble. We must learn from the errors and move forward . . . In difficult times we raise the flags of Bolivar and Chavez to learn from them. We are unconquerable Bolivarians and Chavistas.”

In a message to Maduro, Cuban President Raúl Castro wrote, “I am sure there are new victories to come for the Bolivarian and Chavista Revolution under your leadership. We will always be with you.”

The Bolivarian Revolution and its impact

The outcome of the struggle in Venezuela has great importance for all of Latin America, which is why the U.S., long the dominant power in the region, has been pulling out all stops in its campaign to bring down the PSUV government.

In 2004, Chavez and Cuban President Fidel Castro announced the launching of the Bolivarian Alliance for Latin America, which promoted coordination in economy, social development, culture, science and more between their two countries. In the years that followed, Bolivia, Ecuador, Nicaragua and several of the Caribbean island states joined. Governments oriented toward independent development in Latin America were elected in Brazil, Argentina and more.

These developments were viewed in Washington as a dire threat to U.S. hegemony over the region. The Obama administration has worked long and hard to undermine progressive and socialist governments and the Left in general across the region. The U.S. has supported the recent election of the right-wing, pro-imperialist Macri in Argentina — after months of destabilizing campaigns which weakened President Cristina Fernández’s presidency — and the move to impeach Brazilian president Dilma Rousseff of the Workers Party in Brazil as part of this effort.

The State Department, the so-called National Endowment for Democracy and other U.S. agencies have sent tens of millions of dollars and other forms of assistance to build up and organize the opposition in Venezuela. The U.S. has also imposed economic sanctions that have exacerbated the economic crisis in the country.

Venezuela has the largest-known oil reserves of any country in the world, and oil accounts for 95 percent of the country’s exports. Before Chávez and the Bolivarian Revolution, U.S. and British oil companies reaped enormous profits with minimal royalties paid to Venezuela. Meanwhile, 80 percent of the people lived in poverty.

That all changed under the Bolivarian revolutionary government. Oil revenues were used to fund a vast array of social program, including nutrition, housing, healthcare, employment, education, literacy, childcare and more. Extreme poverty was reduced from 21 percent to 5 percent.

The drastic drop in world oil prices from over $130 to under $40 per barrel, something over which the government had no control, was a fundamental cause of Venezuela’s economic crisis and soaring inflation. Hardest hit were the poor and recently poor who had been the main beneficiaries and supporters of the Bolivarian revolutionary process, causing significant demoralization and demobilization among the Chavista base.

Another key factor in the inflationary crisis was the hoarding of consumer goods, massive currency theft and flight of capital engaged in by the biggest corporate enterprises in the country.

Socialism and revolution in Venezuela

The capitalist media and politicians in the U.S. commonly and falsely refer to Maduro, as they did to Chavez before him, as a “dictator,” despite the fact that this was the 20th national election – counting presidential, legislative, constitutional and referendum elections — in the country in the past 17 years. Most of the media remains in the hands of the right-wing, and played a key role in the MUD victory.

In fact, what is most needed in Venezuela is the rule of the working class; in Marxist terms, the dictatorship of the proletariat. In Venezuela, the progressive and pro-socialist forces of Chavismo hold the reins of government and have a strong influence in the military, but the power of the Venezuelan capitalist class has not been defeated. There is a kind of dual power in the country, two competing centers of power that represent opposing class interests.

Contrary to capitalist propaganda, the dictatorship of the proletariat — or to put it in another way, workers’ democracy — is the most democratic form of class rule  because it represents the interests of the vast majority of society. Here in the supposedly “democratic” USA, we live under the dictatorship of the big capitalists — a tiny minority — who own all the productive wealth and decide what to do with it in their interests, not ours. Accompanying their economic power is an increasingly repressive state and mass incarceration.

The Bolivarian Revolution has been a great step forward for the people of Venezuela, Cuba and all of Latin America. The leaders have announced their intention to build a socialist society. We fully support them.

But the only way that the working class can actually take power is through a socialist revolution that “expropriates the expropriators” – that seizes the factories, banks, natural resources, means of distribution, and so on, most of which is in the hands of a tiny minority, the capitalist class. Such a revolution would break up the old state apparatus and fully consolidate power. A thoroughgoing socialist revolution is the only way that the productive wealth of society can be used to meet the needs of the people rather than enriching the few.

The leadership of the Bolivarian Revolution has had to function under the real conditions at hand. They have made great advances and contributions.  It seems clear that neither Maduro, nor Chavez before him, believed that the requisite conditions had yet come into existence for carrying out such a revolution.

A socialist revolution cannot take place without society entering into a revolutionary situation or crisis, and revolutionary crises cannot be wished into being. They occur outside the control of either the ruling class or revolutionaries.

The Russian revolutionary leader Lenin described the conditions that bring about a revolutionary situation in a famous 1915 pamphlet, “The Collapse of the Second International.”

“(1) When it is impossible for the ruling classes to maintain their rule without any change; when there is a crisis, in one form or another, among the “upper classes,” a crisis in the policy of the ruling class, leading to a fissure through which the discontent and indignation of the oppressed classes burst forth. For a revolution to take place, it is usually insufficient for “the lower classes not to want” to live in the old way; it is also necessary that “the upper classes should be unable” to live in the old way; (2) When the suffering and want of the oppressed classes have grown more acute than usual; (3) when, as a consequence of the above causes, there is a considerable increase in the activity of the masses…”

There have been many revolutionary situations in history that did not result in a socialist revolution succeeding, but there are no instances of such a revolution taking place where societies have not entered into an acute crisis.

“It is not every revolutionary situation that gives rise to a revolution; revolution arises only out of a situation in which the above-mentioned objective changes are accompanied by a subjective change,” Lenin wrote, “namely, the ability of the revolutionary class to take revolutionary mass action strong enough to break (or dislocate) the old government, which never, not even in a period of crisis, “falls,” if it is not toppled over.”

It is entirely possible that in the coming period the newly ascendant right-wing — which includes fascist elements — could, in its rabid desire to dismantle the Bolivarian Revolution, over-reach and engender a mass militant response. It would not be the first time in history that the “lash of the counter-revolution” drove a revolution forward.

The struggle over the future of Venezuela is now entering a new and entirely unpredictable phase, the outcome of which will be of tremendous importance for Venezuela, Latin America and the world. All those who stand for revolutionary internationalism must stand in solidarity with the Venezuelan revolutionaries at this critical time.