ANSWER Coalition continues the struggle in 2014

Incredibly, as 2014 draws to a close, we are witnessing the re-intensification of the seemingly endless U.S. war in the Middle East, and a deepening of the complex crises that previous interventions have inflicted on the long suffering peoples of the region.

U.S. bombing of Iraq resumed in August and began in Syria in September. Just weeks ago, President Obama announced he was doubling the number of U.S. troops in Iraq to at least 3,000, while claiming again that no U.S. forces will be “engaged in combat operations.” Not only does this assertion lack credibility on its face, it was immediately contradicted by the head of the Joint Chiefs of Staff, Gen. Martin Dempsey. And clearly the Pentagon has taken hold of the policy.

In recent months, the ANSWER Coalition has initiated National Days of Action calling for an end to the new wars in Iraq and Syria, with protests taking place in dozens of cities across the country. 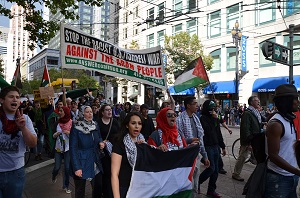 ANSWER organized the largest demonstration and many other protests against the latest U.S.-backed Israeli assault on Gaza. On August 2, 30,000 people marched and rallied in Washington DC, calling for an end to Israel’s U.S.-supplied attack which left more than 2,100 Palestinians dead, over 10,000 wounded and hundreds of thousands homeless.

Now, it is essential that we move forward to broaden, strengthen and deepen the anti-war movement. But that will only be possible with your support. Please take a moment to make a donation today.

The new U.S. intervention is loaded with irony. The Pentagon spokesperson says that the bombing is directed against the self-named “Islamic State” (ISIS) forces that have gained control over large swaths of Syria and Iraq. But it was precisely the arms transfers and funding of ISIS by the U.S. government’s principal allies in the region, especially Saudi Arabia, Turkey and Qatar, that allowed the ultra-reactionary Islamic State to grow strong in its struggle to topple the secular Syrian government led by Bashar Al-Assad.

There is a fundamental truth that the Obama administration seeks to conceal from the people. The so-called Islamic State wouldn’t exist today as a major force either in Syria or Iraq if it weren’t for the U.S. military aggression that smashed the secular, nationalist governments in Iraq in 2003 and Libya in 2011, followed by the U.S. government’s catastrophic support for the armed opposition against the government in Syria.

The U.S. bombing of Syrian territory is taking place without the consent of the Syrian government. It is one more U.S. violation of international law and Syrian sovereignty. The Syrian government had offered to cooperate with the United States in a joint military struggle against the reactionary forces of ISIS. That offer was, however, immediately and categorically rejected by all in the U.S. ruling political circles.

The stated position of the administration is that the Syrian government must be destroyed, just as were the governments of Iraq and Libya. Obama, the Pentagon, CIA and, last and least, the bribed and corrupted talking heads in Congress are determined to use the attack against the Islamic State as a pretext to carry out regime change in Syria by military means.

The real objective of U.S. intervention is to establish permanent Pentagon military bases in Iraq, Syria and the entire strategic and resource-rich region of the Middle East.

For the past 24 years, the United States has relentlessly bombed Iraq and now is bombing Syria. Neither Iraq nor Syria has ever attacked the United States or its people. This enduring war against previously colonized peoples is justified with shifting and changing rationales. But it is illegal as well as unjust, grossly violating international law.

The majority of people of the United States oppose endless war in Iraq and now Syria. It is not in our interest. But just being opposed is not enough.

This opposition must be organized and manifest itself in the streets, on the campuses and at workplaces. If you agree that what is needed now more than ever is a powerful anti-war movement, please make a generous donation.

In addition to our anti-war work, the ANSWER Coalition has been engaged in a wide range of other issues and activities in 2014. 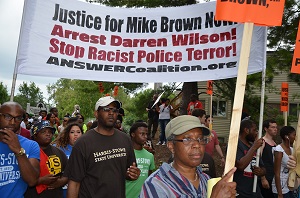 ANSWER activists have been deeply involved in opposing the epidemic of racist police violence that has taken hundreds of lives this year, overwhelmingly young men of color. Our members traveled to Ferguson, Missouri to join the protests calling for justice for Mike Brown, and suffered injuries inflicted by rubber bullets and tear gas at the hands of militarized police as did hundreds of others.

ANSWER organizers are playing a key role in the movement demanding justice for the 43 students disappeared in the state of Guerrero, Mexico and the thousands of others killed at the hands of brutal and corrupt government officials and the drug cartels. U.S. banks have laundered hundreds of billions in cartel drug money, without which the cartels could not function. The Pentagon’s “School of the Americas (Assassins)” has trained many Mexican military officers responsible for much of the worst repression.

ANSWER forums continue to provide progressive education on a wide range of issues. Our monthly film series is now entering its 12th year. ANSWER activists are frequently-heard voices of opposition to the U.S. war machine in international, national and local media.

The San Francisco ANSWER office has served as a vital resource for numerous political and cultural activities over the past year. Many organizations and communities, including the FMLN of Northern California, Women Organized to Resist and Defend, POWER, National Committee to Free the Cuban Five, Friends of the Congo, Block the Boat Coalition, Bay Area Latin America Solidarity Coalition, poets and musicians from the Chilean, Salvadoran and Mexican communities, and many others have made use of our wonderful space.

It goes without saying that the ANSWER Coalition receives no government or corporate funding. All of our work is dependent on the support of individuals like you.

In the words of former U.S. Attorney General Ramsey Clark: “The ANSWER Coalition continues to play a vital and irreplaceable role in building the people’s movement.”

With your support, we will be able to do even more.