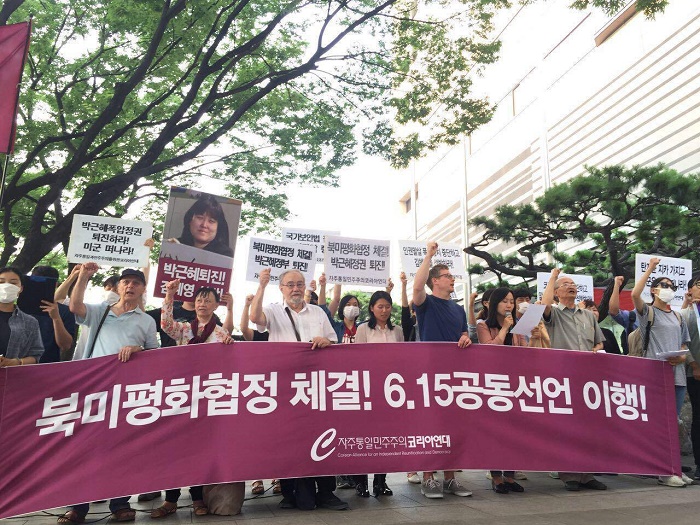 The ANSWER Coalition participated in a week-long delegation to South Korea, which concluded on June 21, in which we participated in the International Forum on Peace and Reunification, visited political prisoners, held meetings with progressive organizations, and joined in several protests and actions.

Several groups, including the Civic-Society Committee for Opposing Political Repression and Protecting Democracy, as well as the North-South Joint Declaration and Society of the April Revolution, organized the conference.

There were four days of plenary sessions that focused on the way forward for the independent and peaceful reunification of the peninsula, and ANSWER participated in each session. Several international speakers presented, as did numerous Korean activists, union leaders and scholars. In addition, we joined in several demonstrations.

The ANSWER Coalition was represented by Derek Ford, who has written a detailed report on the trip.

Political context of the delegation

The political situation in South Korea can best be defined by one word: repression. The Park Guen-hye regime has wielded the country’s National Security Act to arrest and harass progressive organizations and individuals working for peace and reunification. Most egregiously, in early 2014 the government utilized the Act to ban the Unified Progressive Party, which held five seats in the National Assembly and had 100,000 dues-paying members, and to arrest the Party’s leader. The UPP was banned because its platform advocated for “progressive democracy.”

Dozens of other activists have been arrested under the act, and others have been banned from either entering or exiting the country. 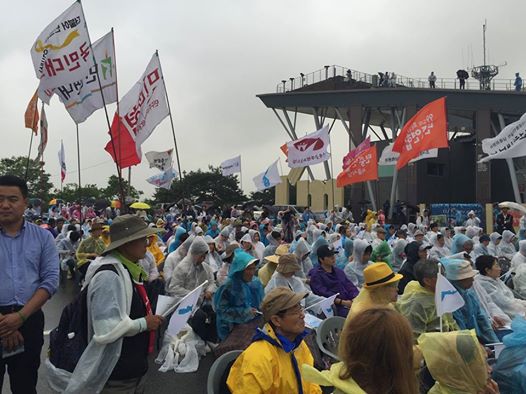 The Act was first established in 1948 as an anti-communist measure by the Syngman Rhee dictatorship. Under the Act, not only is advocating communism illegal, but so is recognizing the DPRK as a political entity and any “anti-government” activity. The Act was intended to legalize the violent repression of the mass communist movement in South Korea at the time. In order to maintain power, the U.S.-backed Rhee dictatorship moved to crush all communist and progressive forces. For example, 50,000 people were massacred after an uprising on Jeju Island from 1948-1949. Throughout the seven decades of U.S. occupation of the country, countless organizers and progressives have been jailed, tortured and exiled to maintain the ruthless division of Korea.

The International Forum on Peace and Reunification was held over the anniversary of the historic Inter-Korean Summit in 2000 that resulted in the June 15 North-South Declaration. As the government in the North has long had a consistent policy for reunification, the "Sunshine Policy" of South Korean President Kim Dae-jung enabled the Inter-Korean Summit. This signaled a policy sea change and a ray of hope for the reunification of the Korean people. However, the South was forced to abandon the policy because of the Bush administration’s anti-North rhetoric and policies.

A week of discussion and action 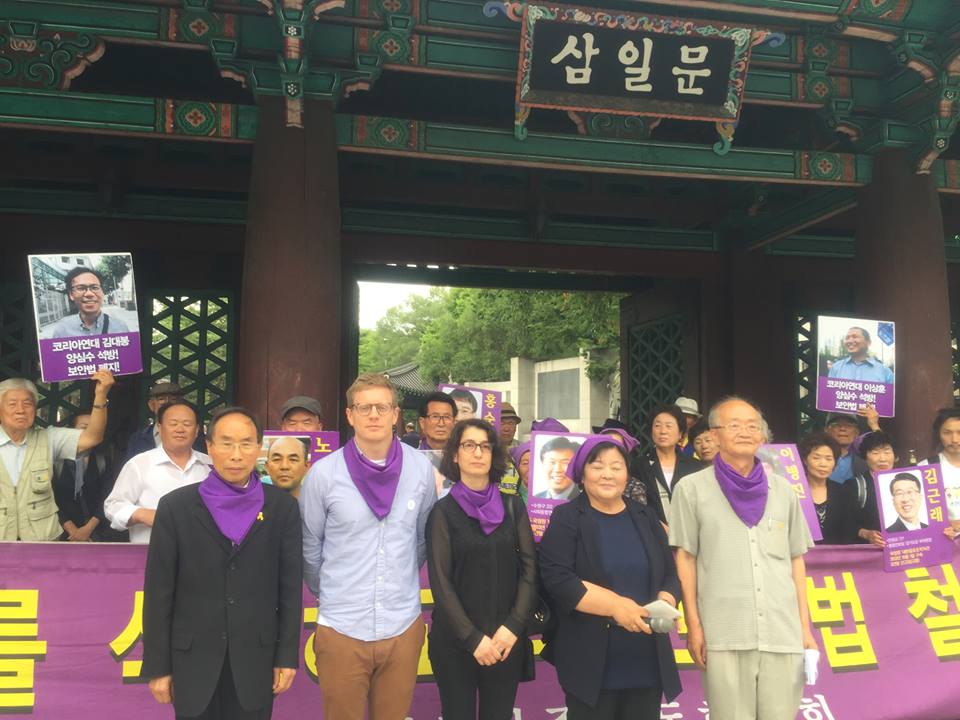 Several groups, including the Civic-Society Committee for Opposing Political Repression and Protecting Democracy, as well as the North-South Joint Declaration and Society of the April Revolution, organized the conference. There were four days of plenary sessions that focused on the way forward for the independent and peaceful reunification of the peninsula, and ANSWER participated in each session. Several international speakers presented, as did numerous Korean activists, union leaders and scholars.

In addition, attendees joined in several demonstrations. On June 15, we travelled to Imjingak, the northernmost point in South Korea, to celebrate an Inter-Korean summit. We marched up to the border with North Korea, where we chanted and tied ribbons to the fence marking off the Demilitarized Zone. The powerful event was both militant—in protesting the South Korean government’s refusal to dialogue with the Democratic People’s Republic of Korea—and tragic—with many protesters crying about loved ones that they have not seen in years as a result of that refusal. 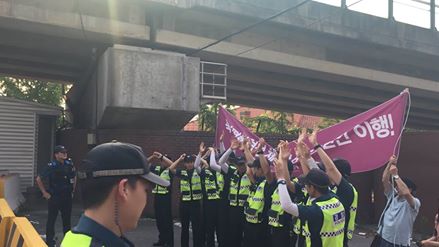 On June 17, we participated in two actions. First, we headed to the massive U.S. military base in Seoul: Yongsan Garrison. We held up a banner in front of an entrance to the base demanding that the United States sign a peace treaty with the DPRK, that U.S. troops leave Korea, and that they stop experiments with Anthrax and the Zika Virus in the country. Then, we went to downtown Seoul for a march on the U.S. embassy. I delivered a statement of solidarity to the Korean struggle, echoing the demand for all U.S. troops to leave Korea immediately.

The next morning we visited with political prisoner Kim Hye-young. Kim was arrested in July 2015 while participating in a peaceful sit-in in Seoul, and in January 2016 was sentenced to two years in prison under the National Security Act. Kim has thyroid cancer and panic disorder, and is being denied adequate medical care. She had just ended a 20-day hunger strike when our delegation arrived in the country. Visits to prison are limited to 10 minutes, so we quickly expressed our solidarity with and admiration for her struggle, inquired about her health, and asked her to keep eating so she can continue the struggle. The Corean Alliance for Independent Reunification and Democracy has held a constant vigil outside of the prison, and the day of our visit was day 314. 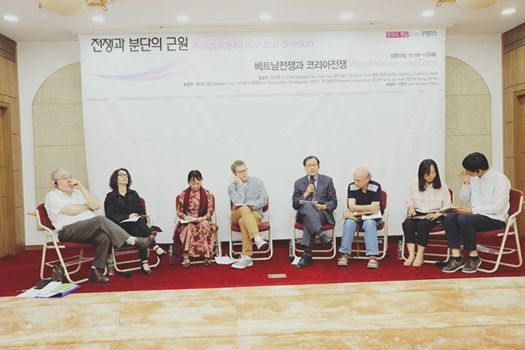 I and the ANSWER Coalition are grateful for the opportunity to learn with and struggle alongside our comrades in Korea. As an organization in the belly of the beast, we take our role in fighting to end the occupation of Korea seriously. We are committed to pursuing every avenue to get the U.S. government to sign a peace treaty with and end all sanctions against North Korea, to pay reparations to the Korean people for the U.S.-led war and occupation, and to shut down all U.S. military installations and bring all the troops home.

Recently, we have witnessed two inspiring examples of how the global solidarity movement can bring real concrete changes.

After years of threatening war against Iran, the United States has now been forced to recognize Iran's legitimate and legal right to establish a peaceful nuclear energy program under the terms of the Nuclear Non-Proliferation Treaty. If this agreement is secured there could be a new day in the Middle East.

Working together we can make this happen. Cynics said that the U.S. would never change its policy on Cuba but it has been forced to change because the old policy did not isolate Cuba in Latin America; instead it isolated the United States. Most significantly, Cuba did not make any concessions by normalizing relations and maintains its independence from U.S. imperialism. That is an important pre-requisite for the normalization of relations with the DPRK.

For the ANSWER Coalition, building global solidarity requires real work. It is not just a matter of expressing intellectual solidarity. It is instead a matter of building concrete ties with comrades across the world, struggling alongside them, and ultimately sharing in the same fate as them.