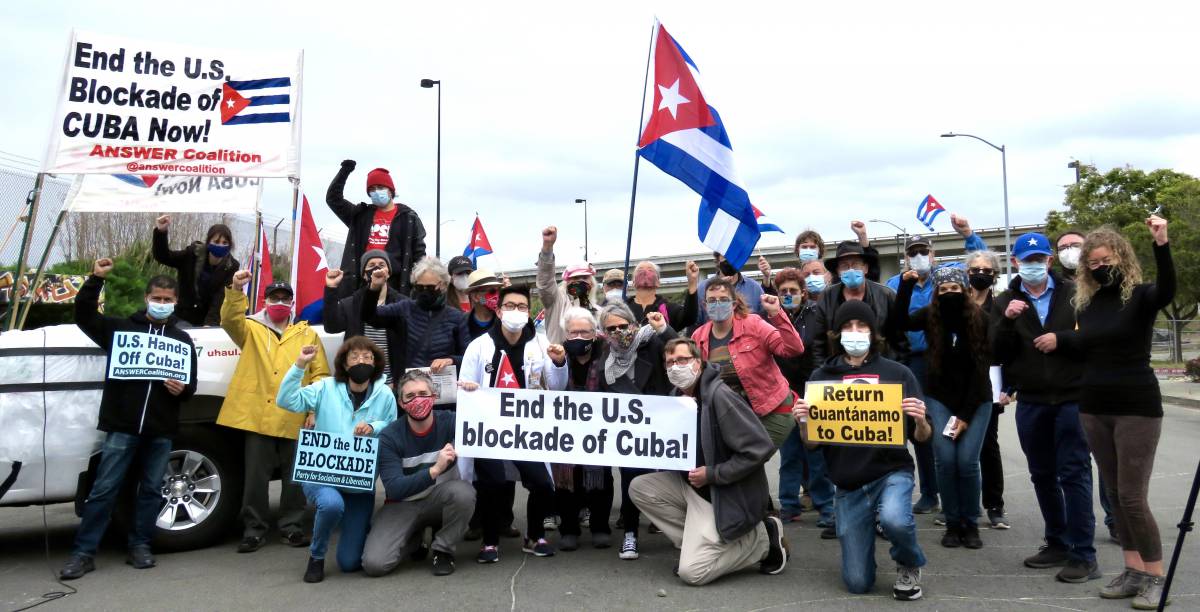 North, south, east and west, activists across the country gathered for car caravans and rallies demanding the end of the U.S. blockade of Cuba. The last Sunday of each month since early this year has seen growing actions here in support of Cuba. President Biden does not intend to lift the 242 brutal measures signed by President Trump. These include the 2019 banning of all remittances by Cuban Americans to their families on the island and placing Cuba on the “supporters of state terrorism” list, an outright lie that is intended to harm Cuba’s international relations and trade even further. In early April, National Security Council Senior Director for the Western Hemisphere Juan González announced that Biden will not take action to ease up on the blockade.

ANSWER Coalition’s director Brian Becker stated last week, “This means that Trump’s vicious policy toward Cuba is now Biden’s policy. The government has claimed for 60 years it is acting for the Cuban people by maintaining the blockade. That is a lie, which the whole world rejects. It is a calculated, multi-pronged weapon designed to cause suffering for the Cuban people. Yet, Washington’s goal of regime change has not succeeded and it never will.

“It is up to us in the progressive movement to stand with Cuba and to organize against these illegal, coercive measures.”

Cars with placards and Cuban flags lined up from New York City to Nashville to San Diego to Miami, to ride through city streets with more than 20 rolling protests, with the aim of raising awareness and a spirit of solidarity with Cuba. All pledged to build for the next Cuba caravan on May 30. These actions will culminate in support for the United Nations’ General Assembly vote on the yearly resolution of “The Need to End the Embargo of Cuba.”

A couple hundred Cuban American families and others from the Cuba Solidarity Movement gathered in Miami’s little Havana neighborhood to hear rousing speeches, music and announcements of birthday celebrations before returning to their cars, trucks and bicycles that made up the monthly End the Blockade of Cuba Caravan. More than 80 cars, trucks and bikes made their way through the streets of Miami’s Little Havana. Car horns honking and flags flying, many onlookers waved approval at this display of action in the ongoing struggle to end the blockade and travel ban and for the uniting of Cuban families, which has now become a global movement including in Cuba.

In a rally before 25 cars proceeded through the historic Latino Mission District, Nathan Kim, a medical resident from the “Do No Harm” coalition of doctors, told the crowd: “We have stockpiled vaccines that the world needs; we do not give them out. We do not really send out doctors. And then I look at Cuba. … They are sending brigades of doctors, they’re sending public health knowhow. They are creating their own vaccine, not just for themselves, but for other countries that have been abandoned. Even a portion of their health care system would do so much here.”

Despite rain, the turnout was the largest yet in San Francisco. Activists from ANSWER Coalition, Code Pink, Task Force on the Americas, Peace and Freedom Party, Do No Harm, Freedom Archives, Socialist Workers Party, Party for Socialism and Liberation, and the Cuba and Venezuela Solidarity Committee took part.

On 24th and Mission Streets in particular, people in their cars and out on the street could be seen taking out their phones to film the caravan going by, with many waves, cheers and honks in support of the message of opposition to U.S. aggression towards Cuba.

To close out the opening rally, Gloria La Riva, coordinator of the Cuba and Venezuela Solidarity Committee said: “When Joe Biden was running for president he said, ‘I will return to the measures that Obama passed,’ allowing group and individual travel to Cuba, allowing remittances to Cuban people and other positive measures, although the blockade was still in effect.

At the Seattle rally, John Waller of the Seattle Cuba Friendship Committee said: “This Car Caravan movement began with one Cuban American in Miami. We in Seattle, together with Los Angeles, were the first cities to follow Miami’s lead. Now we are witnessing this incredible geographic explosion of Caravans — in the United States and Canada, in Cuba itself and around the world. The next challenge in Seattle and everywhere else is to increase our numbers and amplify our voices so that the Cuban people know they are not alone, that Cuban Americans who want normal relations with their homeland and families know that they are not alone, and so that President Biden knows that we will not accept him carrying on with Trump’s brutal attack on Cuba.”

Car Caravans were also organized in Auburn (Alabama), San Diego, Nashville, Milwaukee, Atlanta, Detroit, Los Angeles, Oakland, Albany, New York and Washington, D.C. Speak-out rallies were held in the cities of Indianapolis, Goshen, Ft. Wayne, and Evansville to educate the public about exactly what the blockade is and why people should oppose it. The ANSWER co-organized and participated in actions across the country.