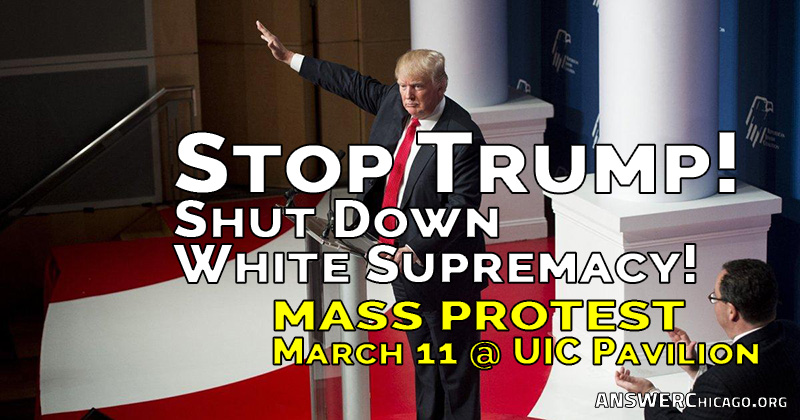 The UIC Pavilion is located at the corners of Harrison and Racine. The doors open at 3 pm for the Trump rally. Student organizers of the protest will be assembling at the UIC quad at 4:30 pm and marching to the Pavilion, arriving at 5 pm. Go to their event page, join the event and invite all your friends

Stand with all immigrants, Muslims and people of color!
Shut down white supremacy!

Spread the word. Organize everyone you can and get them to this very important protest. Everywhere Trump goes he and his racist mob must be shut down by the people!

We must take the Trump campaign seriously. The racist and reactionary presidential campaign of Donald Trump has brought out many thousands of people to rallies across the country and sparked a very dangerous mass movement with white supremacy at its core.

This type of movement must be met with the largest resistance of the people possible anywhere it raises up its putrid head. What is needed right now is for thousands of people in Chicago to descend on the UIC Pavilion and help spark a united mass movement against racism, Islamophobia and attacks on immigrants.

Only the people can stop Trump and the rise of the far right. Waiting for the regular political system and the establishment politicians to stop Trump or stop the menacing resurgence of out-in-the-open racist political organization is a dead end. Racism is part and parcel of the very fabric of the U.S. order.

Let’s remember, it is the very policies and actions of both the Republicans and the Democrats over many decades now that have paved the way for white supremacy to take center stage once again. Racist laws and mass incarceration, spearheaded by the Democrats, have made Trump possible just as much as the Republicans widespread use of racism as a tool to get elected. Both parties are responsible for social and economic policies that are driving people into the Trump camp.

On March 11, we will come together to defend the UIC students and faculty from the Trump invasion and start building a united anti-racist mass movement. ALL OUT!