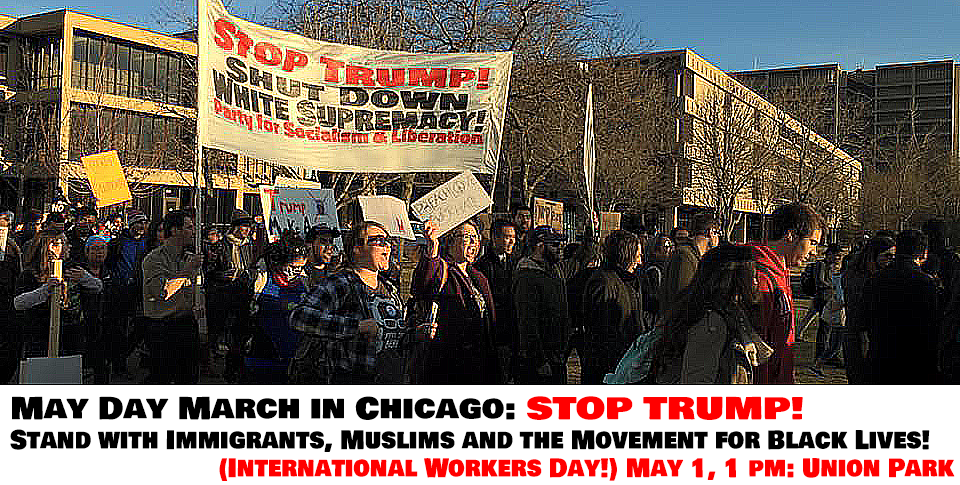 May 01, 2016 at 1:00pm - 4pm
Union Park
Randolph & Ashland
Chicago, IL
United States
Google map and directions
On May 1, International Workers Day, people across Chicagoland will be uniting in the streets for a mass march on Trump Tower. We will stand with immigrants, Muslims, people of color and all workers.
May Day March – Chicago
Sunday May 1, 1 pm
Gather at Union Park (Randolph and Ashland)
March on Trump Tower!
Facebook Event (Organized by MAY DAY MARCH)
Also: Join us for a work session at the ANSWER Office, 4802 N. Broadway, 2nd Floor, on Saturday, April 30 at 3 pm. We will be painting a banner, assembling placards and engaging in engaging informal political discussions. For more info: 773-885-3991
From ANSWER Chicago:
May Day will be a very important day to continue building a mass anti-racist movement. Let’s come out in large numbers, young and old and from every community, and send an impossible to ignore message to the racists and their political enablers that the people will not be divided. We will be united and we will win.
We must answer the growth of a new neo-fascist movement in this country with a fighting mass movement. We must answer with a united front against racism. We stopped Trump on March 11 by coming together. Let’s build on and strengthen that unity.
We must also build resistance to Wall Street and both establishment parties. Ultimately, it is the billionaires and their political servants that are responsible for the dangerous rise of racist demagogues and the large racist rallies being held all over the country. It is the capitalist system of billionaire rule and over four decades of neo-liberal austerity that have ravished the vast majority of the population and led to the popularity of the racist Trump campaign.
Even deeper: The failed economic policies of endless money for war, budget cuts and tax cuts for the rich mean that we must have new answers. These new answers to our growing problems will not come from the top. We need a new economy and a government of, by and for the people in order to resolve the current crises in favor of the people.
The establishment and the state have given their answers to the people’s anguish, struggle and protest: rounding up and deporting record numbers of immigrants and promoting racism against Latinos; suppressing the new Black protest movement with force; using the “anti-terrorist” policing infrastructure to destroy Occupy; targeting Muslims and Arabs; demonizing unions, closing schools and slashing even more money from social services; and much more.
It’s time for the people to intervene decisively and build the kind of well-organized movement that can truly empower the 99%! All out for May Day in Chicago!
We Will Demand:
Stand Against Racism: Stop Trump!
Stand with Immigrants, Muslims and the Movement for Black Lives! Stop the Deportations!
International Solidarity: No More Money for Endless War and Empire–Fund Education, Healthcare, Jobs, Housing!
Save the Planet: Kill Capitalism!
From the Party for Socialism and Liberation (A member of the ANSWER Coalition):
Unite and Fight: Raise the Banner of Socialism for a World of Equality, Peace and Justice!
368 RSVPS