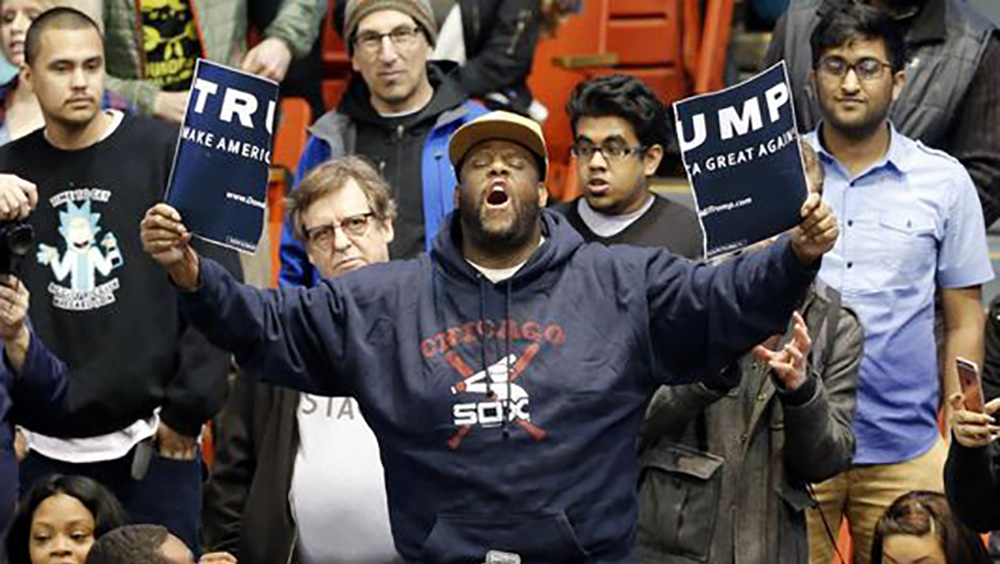 Protesters in Chicago on March 11 shut down white supremacist presidential candidate Donald Trump, and his supporters, forcing the cancellation of a planned campaign rally. It was a great victory for the people of Chicago, the United States and the world.

A multinational crowd of over 5,000 people surrounded the Pavilion on the campus of the University of Chicago Illinois and took over the streets. Inside the event, many thousands of protesters stood their ground and fought off racist and violent Trump supporters, forcing Trump to retreat from Chicago in humiliation.

The protest was led by youth and students who came out from UIC, all over the city and the region to “Shut it down.” A popular chant was: “No Trump, No KKK, No Fascist USA!”

The largely youth and multi-national makeup of the protest was decisive. This type of unity in the streets puts the powerful of this country on notice: a new anti-racist and anti-establishment movement is rising.

Large numbers of Latinos, Muslims, Black people, Asians, Arabs and whites stood together, out of necessity, to confront and defeat a great threat to the people. The threat is very real. White supremacy has once again taken center stage in the United States. Homegrown white racism has historically been responsible for the vast majority of terrorism within the United States.

Though the elites of this country oppose a Trump victory in the primaries, they in no way oppose the existence and power of racist billionaires. In fact, they absolutely need to keep racism around. If it comes to choosing between Trump and an anti-racist youth movement, the establishment will choose fascist Trump without any hesitation whatsoever. That is why Hillary Clinton has insinuated that Chicago protesters acted inappropriately and why the media frames the protest as provocative. They are afraid Chicago will light a fire they cannot put out.

Let's keep in our minds this Chicago moment of clarity and use it in our struggle: It wasn't the Republican Party establishment that shut fascist Trump down. It wasn't the Democratic Party.

Mayor Rahm Emanuel, a very powerful Democrat responsible for the mass suppression of Occupy Chicago and who colluded in the lynching of Laquan McDonald, allowed Trump to invade the UIC campus with thousands of racists. Over 65 percent of UIC students are people of color. Trump was an existential threat to the campus and the entire establishment did zero to defend the students—zero.

In fact, Emanuel has thanked, wait for it … the cops! Yes, that's right he thanked the cops for "keeping the peace" and not the brave protesters who were responsible for a win over white supremacy.

The politicians have shown themselves utterly incapable of shutting down Trump. It was the people—led by the youth—who took matters into their own hands and shut Trump down and drove him out of Chicago.

Going forward, the people will build on the example of Chicago and confront Trump everywhere he and his racist mob raise their head. The people of this country must do whatever is necessary to shut down Trump and the white supremacist movement he is encouraging and giving expression to—for good. Racism cannot be tolerated or given space to expand. It must be stamped out.

We must be on alert. Trump still has momentum and he will surely fight back. He has already threatened to send his followers to Bernie Sanders rallies. We must keep the fires burning. It's time to turn Chicago into a countrywide movement.