China sounds the alarm: Trump prepares for war against Korea 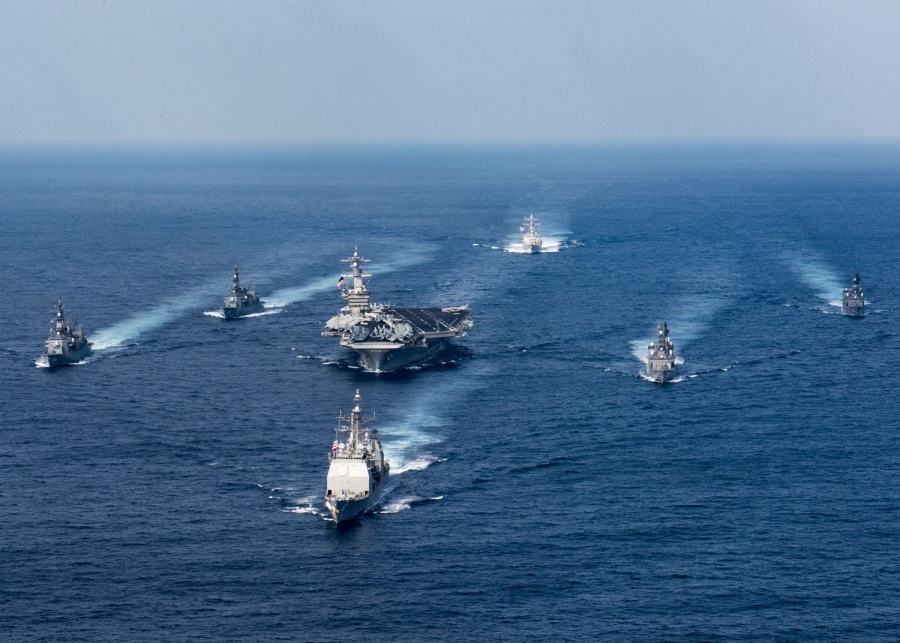 Since this article was first published, the U.S. military has dropped the Massive Ordnance Air Blast Bomb on Afghanistan. The MOAB is a weapon of mass destruction, the most powerful non-nuclear bomb in the U.S. arsenal. Contrary to the Trump administration's lies about the MOAB being necessary to destroy ISIS tunnels, it is not an earth-penetrating munition and serves no purpose other than to sow terror by incinerating all life in its blast radius. In addition to being a monstrous crime against the people of Afghanistan, this is a clear and highly dangerous signal designed to intimidate North Korea and China.

It is not possible to overstate the impact on U.S. and global politics of Trump’s unilateral, surprise cruise missile strikes on Syria at the very moment that he was having dinner with China’s President Xi Jinping.

China got Trump’s message. China must either break from the Democratic People’s Republic of Korea – North Korea – or minimally it must apply immense pressure on it to suspend its nuclear and ballistic missile tests or Trump is prepared carry out a another round of unilateral military action on China’s border.

With each passing day it becomes clear that the Trump Administration has borrowed a page from the Ronald Reagan playbook. Like Trump, Ronald Reagan was written off at first as nothing more than a right-wing, lunatic, grade B-actor/entertainer. But he became a vessel for the Pentagon and eventually was made into an establishment icon because U.S. imperialism recovered from its declining role under his strategy of hyper-militarism and escalating threats.

Trump’s military action against Syria muted his ruling class critics and he won the praise of the Democratic Party leadership and the mainstream media. Trump is on a roll and the next target is North Korea. The Democratic Party “resistance” to Trump has been replaced by obsequiousness. Congress barely whimpered that Trump didn’t even bother to ask for authorization for new war.

The Chinese leadership is obviously stunned. In fact, China is now convinced that a new US military strike in Asia may be imminent unless the DPRK backs down from further expected weapons tests perhaps as early as this coming Saturday – the birthday anniversary of Kim Il Sung, the founding leader of the DPRK.

It must be remembered that the DPRK has consistently offered to suspend nuclear weapons tests in return for the United States cancelling its massive, annual military exercises that simulate the destruction of the North. Both the Obama administration and the Trump administration immediately rejected this offer. The DPRK has also made it clear that what it actually seeks is a peace treaty with the United States to formally end the Korean War that began nearly 70 years ago.

Should Trump take military action and the DPRK responds, which is likely, a new major war could be unleashed.

China lost more than 180,000 soldiers helping North Korea’s military units push U.S. troops out of North Korea in 1950. On the Korean side, more than 5 million Koreans perished according to the Encyclopedia Britannica and the destruction caused by U.S. aerial bombardment was so complete that not one structure higher than one story high was still standing in the capitol of the North, Pyongyang. China understands that Trump’s actions could lead to another and possibly greater catastrophe.

Trump is using the most extreme hawkish rhetoric against the DPRK – far beyond the usual presidential warnings and threats. “We are sending an armada. Very powerful. We have submarines. Very powerful, far more powerful than the aircraft carrier, that I can tell you.” Trump is correct on that point: the Ohio-class Trident submarine can launch a salvo of 192 nuclear warheads able to simultaneously and almost instantly destroy 24 cities.

Trump ready for war in Korea? China thinks so

“The US is making up its mind to stop the North from conducting further nuclear tests, it doesn’t plan to co-exist with a nuclear-armed Pyongyang,” reports the lead April 12 editorial in the Global Times, a media site that unofficially reflects the actual thinking of the Chinese leadership.

Trump tweeted on Tuesday April 11: “North Korea is looking for trouble. If China decides to help, that would be great. If not, we will solve the problem without them!”

Immediately after the phone call with Trump the Chinese media sounded the alarm and insisted that the DPRK not proceed with its expected missile tests. The Chinese media sharply demanded that the DPRK cancel any weapons test for April 15, the anniversary of Kim Il Sung’s birth. The Global Times editorial is truly unprecedented and announces that China is ready to cut off oil exports to North Korea whose economy has stabilized in recent years.

It is essential to read the words of the remarkable lead editorial by the Global Times:

“The US aircraft carrier USS Carl Vinson is headed toward the Korean Peninsula after abruptly turning back from sailing to Australia, and Trump sent a warning via his tweet. These are probably related to reports that satellite surveillance shows North Korea is likely to conduct new nuclear tests.

“Washington’s latest threat to Pyongyang is more credible given its just launched missile attack at an air base in Syria. The Korean Peninsula has never been so close to a military clash since the North conducted its first nuclear test in 2006. (our emphasis)

“If Pyongyang conducts its sixth nuclear test in the near future, the possibility of US military action against it will be higher than ever. Not only is Washington brimming with confidence and arrogance following the missile attacks on Syria, but Trump is also willing to be regarded as a man who honors his promises.

“Now the Trump team seems to have decided to solve the North Korean nuclear crisis. As the discussion runs deeper, a situation of no-solution will not be accepted…

“The US is making up its mind to stop the North from conducting further nuclear tests, it doesn’t plan to co-exist with a nuclear-armed Pyongyang.

“China supports solution of the North Korean nuclear issue under the framework of UNSC and Six-Party Talks. If the US takes unilateral action, it will win little international support. Pyongyang can continue its tough stance, however, for its own security, it should at least halt provocative nuclear and missile activities.

“Pyongyang should avoid making mistakes at this time.” (our emphasis)

Donald Trump is clearly adopting the strategy of Ronald Reagan in the 1980’s. Reagan’s surprise 1980 presidential victory led to a profound realignment of global politics. It was an earlier iteration of Trump’s “Make America Great Again” brand. Reagan and the Pentagon were arguing that America was in decline but that a vast show of military spending and military power could turn the tide.

Reagan employed vast increases in military spending coupled with reckless threats and preparation for wars abroad as a way of gaining leverage over major world powers. In the 1980’s, China joined Reagan in an anti-Soviet alliance and in return was rewarded with the U.S. government’ decision to allow American corporations to engage in foreign direct investment in China while maintaining severe sanctions and technology embargoes on the Soviet Union at a time when the USSR’s economic growth had already slowed.

It looked like the empire was in dramatic decline.

But Reagan and the Pentagon brass employed a new strategy of military build-up, brute force, military threats and a carrots and sticks approach of economic and diplomatic rewards and punishments allowing the United States to either destabilize or reorient the positions of both China and the Soviet leadership.

This was how American imperialism became “great again” following its setbacks in Southeast Asia. This now is the Trump/Pentagon prescription to “Make America Great Again” following its debacle in the Middle East wars of the past two decades.

Today, the danger of igniting regional and global confrontation is real. China and Russia are backpedaling, hoping that their prudence, or possible appeasement, will deter or deflect the danger. Their position is understandable given the level of risk. But appeasement, as we know from history, poses its own risks in the face of bullying and aggression. Appeasing the bully, the aggressor, invites more not less aggression.