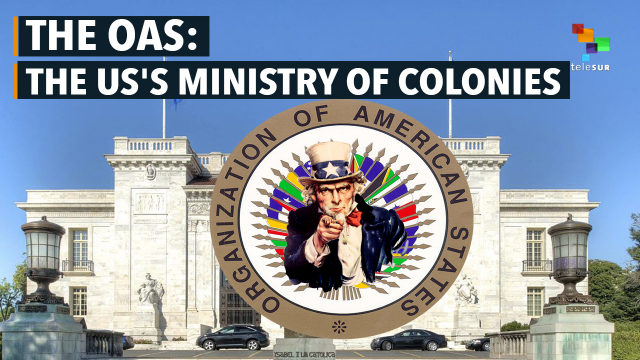 On May 31, the Foreign Ministers of the Organization of American States (OAS) will meet in Washington, D.C., to further their interventionist agenda against Venezuela.

The objective of OAS Secretary General Luis Amalgro — at the service of the United States government — is the destabilization and overthrow of the Venezuelan government, with the goal of ousting the democratically elected President Nicolás Maduro. The leadership of the OAS represents the interests of the U.S. Empire and the right-wing opposition in Venezuela who seek to regain power, rollback the vast social and democratic gains of the Bolivarian Revolution, and take back control of Venezuelan oil.

The current violence in Venezuela began after the OAS Permanent Council approved a resolution at an illegal session on April 3 that undermined the legitimate and democratically elected government. Although Venezuela has announced that it will withdraw from the OAS in defense of its sovereignty, the OAS leadership is continuing its attacks. At the May 31 meeting, OAS Secretary General Luis Almagro plans to promote sanctions against Venezuela.

Venezuelans have the right to solve their own problems without foreign intervention. The Venezuelan people have used their participatory democracy in 20 elections during the past 18 years, and international economic and political interests should not be allowed to interfere. The OAS Member States should publicly call for peace and dialogue and ask Secretary General, Luis Almagro, to stop fueling conflicts with his inflammatory rhetoric.