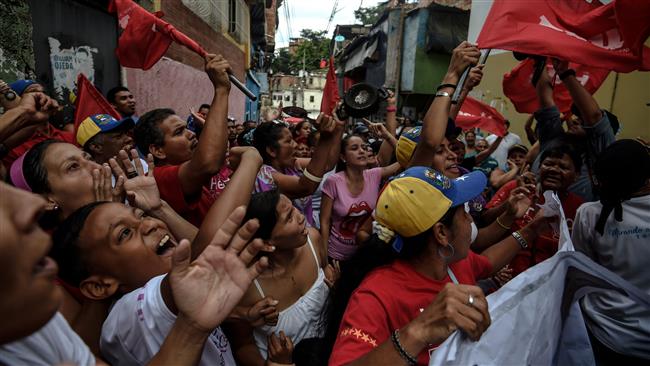 The author, Danny Shaw, was part of an international team of observers who went to monitor the 23 gubernatorial races in Venezuela Oct. 15.

Contrary to everything the U.S. media has reported, what the delegation saw were fair and transparent elections. While the opposition and their international backers — Donald Trump, Luis Almagro and the European Union — cried fraud, the delegation witnessed a vibrant, participatory democracy that many other countries, including the U.S., could learn from.

The Venezuelan National Electoral Council (CNE) invited 70 international observers. The United Socialist Party of Venezuela invited 18. We did not see anything like what the Western media reported. Quite the opposite!

The delegation I was a part of—invited by the PSUV—visited 7 polling stations spread out across working-class communities in Vargas and Miranda. The polling stations were at schools and community centers.

We did not see any violent confrontations or crack down on the population’s right to cast their vote. People of all ages and from different political tendencies stood in line and voted side by side one another in peace. Some wore political t-shirts of their party; others were dressed casually. There were vendors circulating in the streets, children playing and normal neighborhood activity. Coordinators at polling stations were volunteers who were well-known to the community. They provided special assistance for the elderly and disabled to assess voting stations. We were free to interview and interact with voters and volunteers alike for the duration of the day on Sunday.

Our delegation—representing twelve Latin American and Caribbean countries and the U.S.— saw an electorate that was eager to cast their votes. We saw communities free to debate their problems and vote in a laid-back atmosphere. Lines that looped around polling stations moved swiftly. The biometric authorization equipment was modern and efficient.

At one station in Vargas, a middle-aged man waiting to vote cried out that the government was responsible for inflation and unemployment. His arguments were quickly drowned out by a group of women who recast the blame on the U.S.-sponsored economic war.

Here is the complete report of the International Electoral Accompaniment team for more details on the efficiency and transparency of the elections.

Against all odds: victory amidst the Economic War

What makes this electoral victory so impressive is that it comes amidst a devastating economic war that has forced tens of thousands of families to flee Venezuela.

International banks and financial institutions—dominated by the U.S. and their allies—have stripped the Bolivar of its value. The average monthly salary is 310,000 Bolivares. This is a paltry $10.30 when the Bolivar is converted into its street value. To gauge what this means in real life, a pair of imported sneakers costs in the range of one million to two million Bolivares. This gives a sense of just how stifling inflation and the devaluing of the currency is.

Add to this the impact of the 50 percent drop in global oil prices since 2013. After centuries of colonialism and neocolonialism, Venezuela is a mono-producer, highly dependent on oil for foreign revenue.

No country in Latin America besides Cuba has experienced such crippling “international” sanctions and a blockade. This has precipitated the exodus of more than 150,000 Venezuelans in the last year alone, according to scholars studying the emigration phenomenon.

Despite this reality, the PSUV won 54 percent of all votes!

Though the opposition predicted it would make big gains, it actually lost 3 million votes compared to the 2015 elections. The ruling party won 18 states compared to the opposition’s five, three of which were border states heavily influenced by neighboring U.S.-ally Colombia. Even in Miranda, a state known to have a history of anti-Chavista violence, 52.54 percent of the votes were for the government.

Nationally there was a 61.14 percent turnout. In order to gain a sense of the significance of this number, it is useful to compare this to U.S. presidential election turnout which has been between 54-59 percent the past 3 elections.

A 25-year-old worker in the public sector, Raquel Galindo, expressed a view that encapsulated the thinking of the vast majority of Venezuelans: “These election results showed the Venezuelan people’s political consciousness. We didn’t allow ourselves to be manipulated by the economic crisis. The opposition is divided and has lost credibility because it endorses violence. Many of their past supporters stayed home because of this deception. These elections showed Venezuela is a democracy.”

The U.S. press was largely silent about the elections, except to give voice to the right wing. The State Department claimed that the elections resulted were tainted, reflecting their usual disdain for Venezuela.

The hypocrisy is glaring considering the U.S. government has a history of shutting down polling stations, disenfranchising masses of Black, Brown and poor people the right to vote and failing to provide functional machinery in oppressed neighborhoods.

The New York Times accused the government of malfeasance, roadblocks, intimidation and “forcing voters to go to poor neighborhoods.” There were a total of 13,559 polling centers. Only 201 polling centers (a fraction of the total) were relocated, usually within a mile’s distance. Reading between the lines, perhaps what the Times meant was the polls were accessible to everyday, working people.

U.S. media reports are motivated by a desire to demonize Venezuela and have little to do with material reality. The U.S. media shows right-wing violence and sabotage and presents it as a “popular rebellion.” President Nicolas Maduro summed up the opposition’s response: “When they lose, they cry fraud. When they win, they shout ‘Down with Maduro.’”

Venezuelan canciller (the U.S. equivalent of the Secretary of State) Jorge Arreaza stated at the post-election press conference: “The U.S. media was silent after right-wing opposition violence in which human beings were burnt alive. Now they question the election results? Why? To promote more violence?”

Governors elections: a popular referendum on the revolution vs. the opposition

The overwhelming victory for the Bolivarian revolutionary was a rejection of the MUD (Democratic Unity Roundtable) opposition and their strategy of provoking violence in order to justify a U.S. invasion.
The past four months of guarimbas (armed riots) saw 147 deaths in the streets of Venezuela. There were paramilitary attacks on government forces. 29 Venezuelans were lit on fire by the opposition, many of them simply because they were Black. 9 of these citizens were burnt to death.

Before the attacks, the government ordered their troops not to fire back and to maintain peace, and continued to seek dialogue. PSUV youth leader Aybori Oropeza explained the “turn the other cheek” strategy to our delegation: “Chavez taught us to be patience and peaceful. We cannot can sucked into this trap. That is what the U.S. and their puppets want so they can bomb us.”

In anticipation of the elections, right wing demagogues made extremist, sanguinary predictions that this was the eleventh hour for the revolution and there was no way to deal with the government but through violence. Their admitted goal has been bloodshed in hopes that the “international community” (an euphemism for the U.S. government) would intervene.

Despite the media offensive, even opposition leaders recognized the results. According to one opposition leader, Enrique Ochoa Antich, the elections showed the Chavismo is the dominant political force in the country and independent bodies audited the election results 14 times, confirming just that.

Here is a more detailed analysis of the collapse of the opposition.

Another large reason for the PSUV’s success was its principled response to the Economic War. The government has provided subsidized food through the CLAP program and waged a campaign against state corruption. For a deeper analysis of the Venezuelan leadership’s moves to deepen people’s democracy and overcome the Economic War, see here.

In summary, the vote for the PSUV was a vote for peace.

We cannot underestimate the regional implications of Sunday’s solidification of the Bolivarian Revolution. The Bolivarian current has been on the defensive recently. The 2015 victory of Mauricio Macri in Argentina, the 2016 coup in Brazil and the changing of the guard in Ecuador this year have all been victories for right-wing forces aligned with imperialism.

Sunday’s victory in Venezuela; the massive campaign forming around Cristina Fernandez’s bid to be the senator of Bueno Aires province; the grassroots movement in Brazil against the coup and Rafael Correa’s pledge to take control back over the Revolucion Ciudadana are all signs that popular forces are fighting back across the region.

Sunday proved that a united, conscious people can overcome all odds. Despite the ruthless attempts by self-anointed global tyrants to strip Venezuela of any buying power, reduce it to hunger & pauperism, provoke massacres and mass migration, the Venezuelan people stood up and triumphed. Sunday was not just a victory for the working people of Venezuela; it was a victory for poor people across the world.