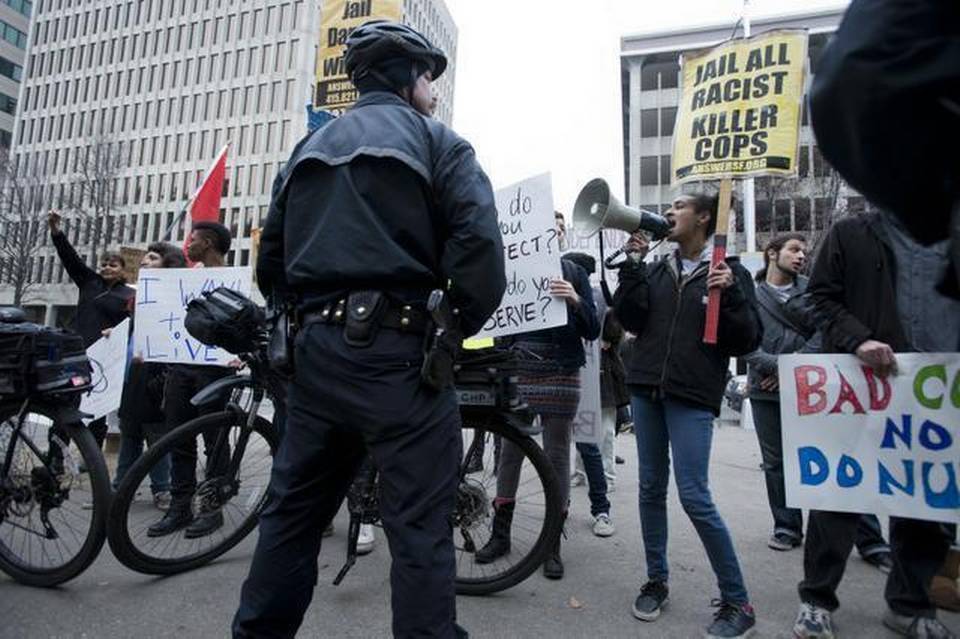 The Sacramento police have outrageously charged ANSWER Coalition activist Maile Hampton, a young Black woman, with felony “lynching.” After holding her initially on $100,000 bail, Maile is now out of jail but faces the threat of four years in prison on the charges. But we are fighting back!

As the famous slogan of the Black Lives Matter movement correctly stated, "The whole system is guilty." This reality holds from this case, to the cops who killed Mike Brown and Eric Garner, to the legal system and politicians who sanction this violence. This is the historical reality of the United States, a country that was built on the extreme brutality of slavery, indigenous genocide, racism, misogyny, and anti-LGBTQ bigotry. This is the country whose police today are charging a young Black woman with lynching!

Lynching is what mobs of white racists committed against thousands of Black people in the United States. They took Black people from the custody of the police with the tacit consent of the cops and state. The mobs then beat, mutilated, tortured and hanged them. This ironic plot to charge an anti-racist Black protestor with lynching screams arrogance on the part of the cops and the DA. The people see through these charges. We charge the state with lynching. We charge the state with attempting to lynch the Black Lives Matter Movement.

The police and county DA falsely claim that Maile is guilty of obstructing justice and removing a person from police custody (“lynching” under California law). In fact it is the police who are guilty of obstructing justice, in this case and historically. These charges against Maile are in reality "revenge" charges against leading activists of the Black Lives Matter movement. We in the ANSWER Coalition, along with a wide network of endorsing organizations, are mobilizing to fight back against this police repression.

The story that the police and DA present is entirely different from the facts of what actually happened. In reality, on Jan. 18, a peaceful march was disrupted by violent police who wanted to shut it down because of its political content. The police violated the protestors’ right to free speech and arrested several people. The police were the aggressors, not the activists. The police obstructed justice, not the protestors.

The state wants to repress the movement sparked by the killing of Mike Brown and the heroic uprising of the people in Ferguson, Mo. They want to repress this movement because it has swept the country, awakening the mainstream to what’s being described as the war against Black and brown youth. From the killer cops, to the school-to-prison pipeline, to the deportations, to gentrification and poverty, we are seeing the disenfranchisement of a generation. The Black Lives Matter movement was speaking about these truths. It embarrassed the state, which must deny reality and cling to cliche phrases about freedom and democracy.

While the police attempt to disrupt the movement, in part by singling out activists like Maile, we must continue the struggle. We will support our sisters and brothers in the cross hairs of the American legal system. We must continue to protest in the streets against police brutality and against all forms of racism. The movement cannot be extinguished. We invite all people to unite with us in this movement, to support Maile in her legal defense, and to join us in resistance until racism is finally eradicated.