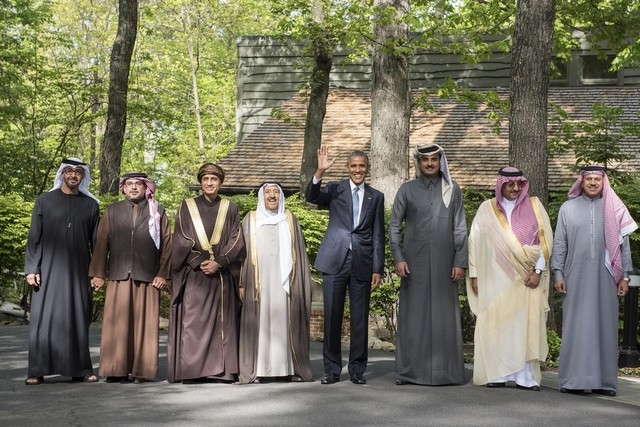 On May 14, senior leaders of the Gulf Cooperation Council states met with President Obama in a high-profile summit at the Camp David presidential retreat. The GCC is an alliance composed of Saudi Arabia, Kuwait, Bahrain, the United Arab Emirates, Qatar and Oman, all governed by absolute monarchies that play key roles in the global supply of oil. Saudi Arabia is the dominant member of the bloc.

The meeting was meant to repair what has lately been a turbulent relationship between the U.S. government and its traditional clients in the Middle East. Instead, the meeting ended up publicly highlighting these tensions in an embarrassing reminder of the declining hegemony of U.S. imperialism.

The summit began to unravel earlier that week, when Saudi King Salman announced that he would not be attending. Other monarchs quickly followed suit, sending cabinet members instead. Ultimately, the only heads of state who attended were from Kuwait and Qatar, which are often out-of-step with the Saudi-directed strategy being pursued by the alliance – the latter because of its support for the Muslim Brotherhood and the former for its comparatively good relations with Iran.

King Salman insisted that his absence was necessary so that he could monitor a temporary ceasefire in Yemen, but his decision was still widely understood as a sign of deep disagreement with recent U.S. actions in the region. The King of Bahrain was less charitable with his excuse – he needed to go to a horse show with the Queen of England.

This is not how U.S.-GCC relations have historically worked. The Gulf monarchies are very vulnerable states that are militarily and politically dependent on the U.S. government. The ruling classes of the GCC have enriched themselves to astounding degrees on the basis of the super-exploitation of foreign workers who are held in a state of near-slavery and in many cases make up the large majority of the population. They receive huge amount of U.S. military aid, especially Saudi Arabia, that allows them to project an outsized level of power in the region.

That the GCC states are willing to risk a growing rift with their main patron, whose support is vital to the stability of their regimes, is a clear indicator of the declining position of U.S. imperialism in the Middle East and the world as a whole. Since their defeat in Iraq, which the Bush administration had hoped would be the beginning of a sweep through the region that would eliminate all independent governments, the United States has been unable to regain the initiative. U.S. sponsorship is no longer the iron-clad guarantee of survival that it once was.

The Obama administration has been confined to reacting to events and minimizing losses. It has been unable to fully pursue its preferred policy of a “pivot to Asia” to contain China because of growing instability in the Middle East that threatens the vital assets of U.S. capitalism.

Similar to the Israeli government and the Republican Party, the GCC is in favor of aggressive gambles to reverse the trend of declining U.S. hegemony. President Obama, on the other hand, represents a trend within the ruling class that understands that the possibility of absolute domination of the Middle East has passed, and that U.S. imperialism would be better served by a strategy that recognizes the limits of its own power.

Opposition to a thaw with Iran

Negotiations with Iran are a centerpiece of the Obama administration’s foreign policy, and it has staked a tremendous amount of political capital on their success. Ostensibly, they revolve around Iran’s atomic energy program, which the U.S. government and its allies publicly insist is aimed at developing nuclear weapons despite the fact that their own intelligence agencies have reported that there is no evidence of this.

The real aim of the talks, however, is to negotiate the terms of a thaw in relations between the two countries. The overthrow of the Iranian government has been a consistent objective for U.S. imperialism since it established an independent orientation following the 1979 revolution, but many in the Obama administration view the country as a potential partner in an increasingly unstable region. The U.S. government’s predicament in Iraq illustrates the utility of this approach – Iran has powerful allies among the country’s Shiite militias, but the United States lacks a reliable military proxy.

If the U.S. government were to increasingly look to Iran to police the Middle East, the importance of Saudi Arabia and the rest of the GCC would decline. They would become expendable. Even in a period of declining U.S. power, this would be potentially fatal given the highly vulnerable nature of their regimes. By embarrassing Obama at Camp David, the GCC monarchs are gambling on their ability to undermine the negotiations with Iran, which are supposed to produce a final deal by the end of June.

Frustration over the stalemate in Syria

The GCC countries are among the main suppliers of weapons, money and recruits to the armed opposition in Syria. Their position in the region would be seriously weakened by the long-term survival of the Syrian government, whose main ally is their arch-rival Iran.

The U.S. government shares the Gulf monarchies’ strategic goal of installing a client state in Syria and has been a main instigator of the civil war, but differs over the amount of risk it is willing to take to accomplish this. In 2013, the U.S. government came extremely close to launching an air war against Syria, but a deeply divided Obama administration pulled back at the last minute. It then went on to sponsor the failed Geneva peace talks.

This was seen as a betrayal by the GCC, which, like the Syrian opposition, had long been pushing for more aggressive U.S. intervention.

Deeply frustrated, Saudi Arabia has now resolved to take the lead. It is attempting to host a conference of the disparate opposition factions in mid-June to build a united front of forces fighting the government, something that has proved elusive since the beginning of the civil war.

With the capture of the major city of Idlib by a coalition of right-wing Islamist militias that include al-Qaeda affiliate al-Nusra Front, the Gulf monarchies are now optimistic that the tide could be turning against the Syrian government. This would be a welcome development for U.S. imperialism as well, but because of its growing dispute with the GCC it would have less influence over the course of events.

With its back against the wall, the Saudi monarchy has decided to gamble on a bombing campaign to restore Yemeni President Abd Rabbuh Mansur Hadi to power. Hadi was overthrown earlier this year by a rebel group called Ansar Allah (more popularly the “Houthis”) and forces loyal to former dictator Ali Abdullah Saleh. The Houthis are considered to be allies of Iran.

As the Houthis’ and Saleh’s forces closed in on the last pro-Hadi strongholds in southern Yemen, a Saudi-led coalition of the GCC states (with the exception of Oman) and their regional allies initiated an intense bombing campaign. Hundreds if not thousands of civilians have been killed in this blatant violation of Yemeni sovereignty.

The U.S. government has declared its support for the ongoing bombing and has provided logistical support, but it is clear that this was a Saudi initiative. This does not fit the traditional client-patron dynamic of U.S.-Saudi relations. The bombing of Yemen was launched to heighten tensions with Iran in an attempt to stop the impending reorientation of U.S. foreign policy in the region, and to restore an important Saudi ally at a time when it appears that the kingdom may have to increasingly rely on itself to safeguard its vital interests.

In the end, the Camp David summit failed to produce any agreements major enough to reassure the GCC states of their future security. The United States promised to speed up the delivery of weapons and construct a more robust missile defense system in the Gulf. Joint military drills were announced.

There had been speculation about a U.S.-GCC mutual defense pact, which would have been dramatic enough to fundamentally alter the balance of power in the region. However, this was taken off the table before the meeting took place by U.S. officials, who stated that such a move would be premature.

The architecture of world politics is going through a profound transformation. Instead of a period of uncontested U.S. domination, as had appeared possible in the 1990s, the post-Cold War era is increasingly marked by conflict and instability.

Rising world powers are beginning to fill the vacuum left by declining U.S. imperial might, and the U.S. ruling class is becoming more and more desperate to reverse or at the very least arrest this trend. Realizing that they are on a sinking ship in world politics, disaffected client states like the GCC countries are increasingly willing to take major risks that threaten to escalate uncontrollably.

To be sure, U.S. imperialism remains a potent force and a grave threat to all oppressed people. However, the underlying tendency in world politics is towards greater conflict and fragmentation as rivalries between competing capitalist powers sharpen. Public relations stunts like the Camp David meeting cannot suppress this.