We can build this movement with you, but not without you

Dear supporter of the ANSWER Coalition --

We in the ANSWER Coalition know that you are as determined as we are to widen and deepen public awareness about the destructive impact of militarism and the drive toward endless and repeated war. Nothing is more important than the fight against empire and for justice continuing no matter who occupies the White House.

As 2020 comes to a close, we are asking you to make an urgently-needed donation to sustain the ANSWER Coalition and the anti-war movement into the new year.

Many people across the country and around the world are rightfully relieved that the presidency of Donald Trump is coming to a close. But the military-industrial complex and the imperialist consensus among the Pentagon and foreign policy elite are not going anywhere. The approximately 800 U.S. military bases around the world will still be there after Inauguration day. Both Republicans and Democrats are committed to the doctrine of major power conflict that puts the United States on a path to catastrophic confrontation with China.

The Pentagon is rushing to create a new generation of nuclear weapons and has made military supremacy in outer space a top priority. The world has experienced the savagery of two world wars. It is unconscionable that the Pentagon and the vast attendant funding apparatus has prioritized preparing for the next global conflict. It is both a pretext for the looting of the national treasury by the armaments industry and simultaneously a dystopian self-fulfilling prophecy.

We are constantly organizing to end the bombing, the occupation, the endless drone assassinations, economic warfare and the covert intervention that has characterized U.S. foreign policy for so long, and in its place build a just society. By defunding the Pentagon we can reinvest the hundreds of billions of dollars that are thrown away every year on destruction into solutions to the deep injustices in this country. Fifty million Americans are hungry and 40 million families face imminent evictions while millions have lost health care coverage during the pandemic. We are organizing at the grassroots -- all over the country -- to insist that money be spent on healthcare, affordable housing, relief from hunger and education instead of going to line the pockets of the war profiteers.

We can only organize this movement with your generous support. Please make a donation today to ensure that the ANSWER Coalition has the resources we need to build the movement against U.S. empire into an ever more powerful force.

(Donations to PUF / ANSWER Coalition are processed by our fiscal sponsor, the Progress Unity Fund, a 501(c)(3) organization and are tax-deductible.)

Video: Hundreds March in SF to End the Epidemic of Racist Police Murders 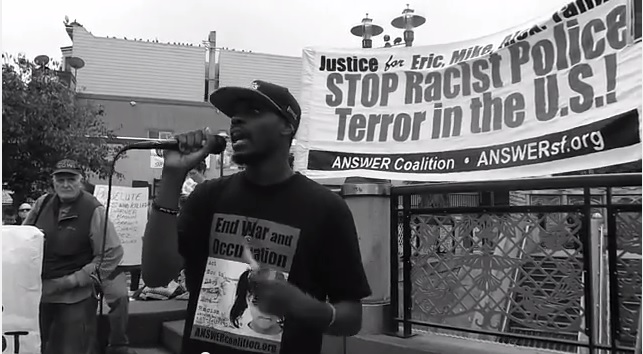