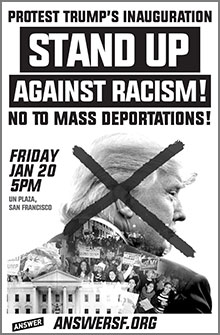 Progressive people from all over the country will be descending on Washington, D.C. on January 20, 2017, to stage a massive demonstration along Pennsylvania Avenue on Inauguration Day along with corresponding actions in San Francisco and other West Coast cities.

Trump’s appointees are a motley and dangerous crew of billionaires, white supremacists and other extreme rightwingers. They have nothing good in mind for anyone but the banks, oil companies and the military-industrial complex.

Please make a generous donation now to support the struggle against racism, sexism, bigotry and the Trump agenda!

It is more important than ever that we keep building the grassroots movement against war, militarism, racism, anti-immigrant scapegoating and neoliberal capitalism’s assault against workers’ living standards and the environment.

Real social change comes from the bottom, the mobilized grassroots, and not from the centers of institutional power, the professional politicians or the capitalist elites.

This country needs a real political revolution. Millions of people feel entirely disenfranchised by a political system that delivered the least favorable and trusted candidates in U.S. history. Many hoped that the Bernie Sanders campaign would represent a new direction and opportunity to take on entrenched power and extreme inequality, for a higher minimum wage, to defend Social Security, rebuild the labor movement, provide universal health care and free tuition.

Donald Trump is a racist, sexist bigot. On Inauguration Day, thousands will be in the streets to give voice to the millions of people in this country who are demanding systemic change and who reject Trump’s anti-people program.

Join us on January 20, 2017, for a massive mobilization of the people!

Let's stand together to say NO to:
... attacks on immigrants and mass deportations

... hate crimes and the 'Muslim registry'

... police brutality and the repression of protesters

... the reversal of hard-fought for women's and LGBTQ rights

Trump
Donate to the Movement Volunteer - Get Involved Today