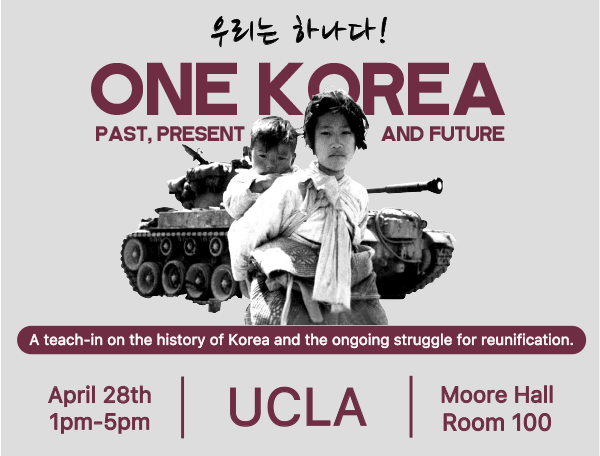 Los Angeles Teach-in | One Korea: Past, Present and Future

Despite the threat of a war breaking out in Korea, the full geopolitical and historical context of this decades-long conflict is rarely covered by the mainstream media. The DPRK ("North Korea") nuclear program garners widespread press, but little is said about why they are pursuing nuclear weapons. The Korean War, while claiming millions of lives, is often called "The Forgotten War" in the United States. Join us for an afternoon of lectures and discussions with a diverse panel of experts on Korea. Lean the real story of Korea, the U.S. role in the conflict, what can be done to finally bring about a peace treaty, get U.S. troops out of Korea and achieve reunification.

This teach-in will potentially occur the day after after talks between Moon Jae-in and Kim Jong-un are set to take place and after reports emerged last week of a possible peace treaty between the North and South.

Don't miss out! If you would like to attend the teach-in in person you can RSVP with this link. In the registration form, you can also sign up to receive a link to the livestream when the event begins.

Christine Hong: assistant professor of transnational Asian American, Korean diaspora and critical Pacific Rim studies at UC-Santa Cruz. She is a steering committee member of the Alliance of Scholars Concerned about Korea, a coordinating council member of the National Campaign to End the Korean War and a member of the executive board of the Korea Policy Institute.

Abby Martin: Anti-imperialist journalist, Founder of Media Roots, Board of Directors at Project Censored, Former Host of Russia Today's Breaking the Set, Host of teleSUR's The Empire Files, a documentary series covering issues through the lens of US empire.

Gloria La Riva: Peace and Freedom Party candidate for Governor of California; 2016 PFP and Party for Socialism and Liberation candidate for president, who received more votes of any socialist presidential candidate since 1976.

Will you come? RSVP below!