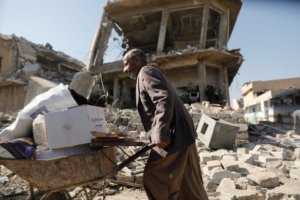 In early July, major news outlets reported the taking of Mosul from Islamic State by U.S-led Iraqi government forces as a “liberation” and a “victory.” The smoke has now cleared, revealing civilian carnage and mass destruction inflicted by these same “liberators.” While major news outlets gave plenty of coverage to the “victory ‘ in Mosul, little to no emphasis has been given to the destruction of the city and cost of human life. The Mosul operation was directed by the U.S., with U.S. soldiers on the ground.

When the Syrian army took Aleppo in December, 2016, the establishment press let loose with a firestorm of protest, charging mass murder of civilians, attributing all war casualties to the Syrian army and demonizing the Assad government. Mosul has been portrayed in a completely different manner. Reports on the battle from major western media outlets barely covered the
destruction and civilian deaths, and the extent of the carnage has remained hidden.

“The expulsion of [IS] from Mosul by the US-led coalition did receive coverage, but the US role in killing civilians was uniformly ignored,” according to Fairness and Accuracy in Reporting, a media watch group. FAIR goes so far as to describe some media coverage of Mosul as “Pentagon press releases.”

The horrors of the battle of Mosul were documented in a 50 page report from Amnesty International issued July 10 entitled “At Any Cost: The Civilian Catastrophe in West Mosul, Iraq.” This report, based on field studies during the siege and on interviews with civilians and medical professionals who witnessed the bloodshed first hand, charges the U.S.-backed forces with “repeated violations in international humanitarian law, some of which amount to war crimes.”  News of this report should have reverberated around the world. Yet the Amnesty report was covered by only one major radio or TV outlet—NPR, according to FAIR!

The cost of coalition victory

A city with a rich history, Mosul sits in northern Iraq, less than 100 miles from the Syrian and Turkish borders. As one of Iraq’s major cities it had a sophisticated infrastructure. It also housed centuries old mosques, shrines, churches and even a 13th century synagogue. Most of this has been destroyed.

One of the largest mobilizations of forces since the 2003 invasion of Iraq, the retaking of Mosul was declared a high priority for the U.S.-led coalition forces. Civilians not able to flee bore the brunt of coalition attacks. In addition to air strikes, coalition forces heavily relied on shell and rocket fire from the ground, a method with less accuracy and concern for collateral damage. Entire buildings were leveled if a sniper was spotted on a roof, often long after the IS sniper had fled, according to the report.

For instance, according to Amnesty International, “On 17 March 2017 a US airstrike on the Mosul al-Jadida neighborhood killed at least 105 civilians in order to neutralize two Isis snipers. Regardless of whether – as the US Department of Defense has maintained — secondary explosions occurred it should have been clear to those responsible that the risk posed to civilians by using a 500 pound bomb was clearly excessive in relation to anticipated military advantage….

“There were very few Daesh [IS fighters] in our neighborhood, but they dropped a lot of bombs on them,” says Qais, 47, a resident of the al-Jadida district of Mosul. “We reckon that the airstrikes here killed between 600 and 1,000 people.”

Amnesty International estimates 6,000 civilians killed since the coalition assault began, but thinks the numbers might be much higher. Hoshyar Zebari, a Kurdish leader and former Iraqi Finance and Foreign Minister, said Kurdish intelligence estimates this battle claimed over 40,000 casualties, according to Counterpunch.The true number may never be known.

“There are many civilians among the bodies. After liberation was announced, the order was given to kill anything or anyone that moved,” said an Iraqi army major, speaking on the condition of anonymity. “There is no law here now. Every day I see we are doing the same thing as Daesh.[IS] People went down to the water because they were dying of thirst and we
killed them.” (Daily Mail)

Pro-government forces also failed to take effective precautions to protect civilians when planning and executing attacks. They did air-drop leaflets into IS-controlled areas of the city, instructing civilians to stay away from IS or to hang children’s clothes on the roof to mark civilian homes. These warnings, however, took little account of the realities. Staying away from IS was impossible for west Mosul residents and fighters would execute anyone caught with a flyer in their hands. Houses with children’s clothes on the roof were still hit by airstrikes.

Amnesty International has demanded that Iraqi forces and members of the U.S. led coalition ensure that the fight against IS—not only in Mosul but also in other battles in Iraq and Syria—is conducted in a way consistent with international law and standards. Civilians trapped by conflict and abused by IS must be treated with the dignity and humanity they deserve. AI is calling on the Iraqi government and members of the U.S.-led coalition to:

It’s estimated that one $1 billion will be needed to rebuild the infrastructure of Mosul, yet no money is allocated for this in the Iraqi government budget.  Civilians are left to themselves to deal with surviving the terror of war, in a broken city, where there is no plan to rebuild or repair.  Adding insult to injury, there are already charges that the new occupying forces are corrupt.  Zebari said civilians have had to pay expensive fees to have bodies removed from the rubble or to even reoccupy their own homes.

Where is the outrage?

One has to wonder, “Where is the media outrage?”

Late last year when the Syrian city of Aleppo was liberated by the Syrian government from  rebel groups of terrorists, major media outlets kept a tally running on civilian casualties, falsely depicting the Syrian government forces as the sole perpetrators, and demonizing the Assad government. Journalistic integrity was forgotten as any sensationalized, unverified report was treated as truth. Less than a year later, the “genocide of Aleppo” narrative has been proven false as hundreds of thousands of civilians return to liberated areas there and reliable investigations are underway.

If the media are so quick to throw the term “genocide” around regarding civilian deaths in some conflicts, why are they so silent about the atrocities and horrors known to have been inflicted by U.S.- controlled forces in Mosul?  The major news outlets follow the political line of the super rich who own them. In doing so they serve as propaganda outlets for the Pentagon, giving only the perspective that benefits corporate profit, distorting and suppressing the truth.

The U.S.-led coalition’s lack of concern for human suffering in Mosul should come as no surprise. When Washington imposed sanctions against Iraq from 1990-2003, it had no problem with the resulting at least half-a-million civilian deaths, a great many of them children. The Pentagon’s use of depleted uranium weapons in Iraq caused suffering that will last for generations. Cancer rates have skyrocket from 40 per 100,000 in 1991 before the First Gulf War to at least 1,600 per 100,000 in 2005, and birth defects have dramatically increased, according to the Iraqi government.

This scenario is a very familiar to the people of Vietnam who still suffer the long-term genetic effects of the Pentagon’s extensive use of the toxic defoliant agent orange during its murderous campaign there in the 1960s and 1970s.

The mass civilian killings in Mosul reveals that U.S. imperialism still has the same mind-set that killed millions of innocents in Vietnam, Korea and elsewhere around the world. The U.S. ruling class that dictates foreign policy is ultimately concerned with money and power.  It has no conscience or compassion in its never-ending conquests for new acquisitions. If we are to stop this slaughter for profit, we need to be able to see through their corporate media propaganda, and expose the vile capitalist system for what it is.