The following article, published on May 9, 2017, was written by Richard Becker, Western Regional Coordinator of the ANSWER Coalition.

The ANSWER Coalition stands in solidarity with the heroic hunger strike carried out by Palestinian prisoners held in Israeli jails. 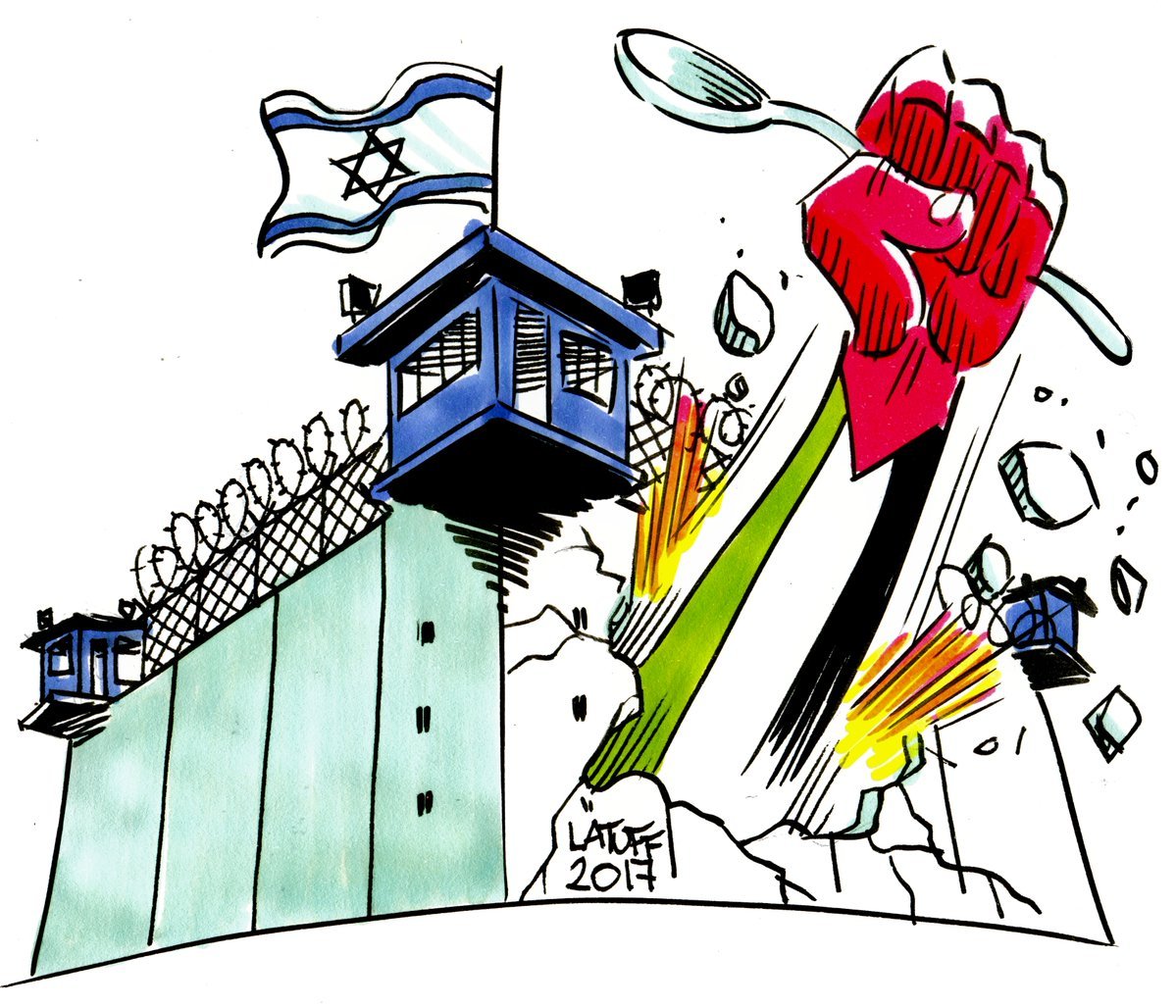 The mass “Freedom and Dignity” hunger strike by more than 1,000 Palestinians held illegally in Israeli prisons has entered its 23rd day on May 9 and is growing.

The strike was initiated on April 17, Palestinian Prisoners Day, by a call from Marwan Barghouti, a popular leader of the Fatah party who has been jailed since 2002. On May 4, imprisoned leaders of other Palestinian organizations, including Ahmad Saadat, General Secretary of the Popular Front for the Liberation of Palestine, Abbas al-Sayyid, head of the Hamas prisoners’ leadership committee, former hunger striker and journalist Muhammad al-Qiq, and longest-held Palestinian prisoner, Nael Barghouthi, announced that they were joining the strike.

The demands of the strike are focused on terrible prison conditions, the widespread use of solitary confinement and the denial of family and attorney visits.

Since the June 1967 war when Israel conquered the West Bank, East Jerusalem, Gaza and Syria’s Golan Heights, more than 800,000 Palestinians have been arrested and imprisoned inside the 1948 borders of the state of Israel in clear violation of international law. Article 76 of the Fourth Geneva Convention forbids the detention of residents of an occupied territory in prisons inside the occupying country.

More than 40 percent of adult Palestinian males have been imprisoned for resistance activities over the past 50 years, as well as more than 10,000 women. Nearly 9,000 children have been detained since 2000.

One fact alone proves Israel is a colonial oppressor

Palestinian prisoners are routinely subjected to torture, administrative detention without charge for up to six months (indefinitely renewable), and many other forms of abuse.

According to the prisoner solidarity organization Addameer, based inside the West Bank: “In the calendar year ending on Sept. 30, 2016, the Israeli occupation forces arrested 7,955 Palestinians in the West Bank and Jerusalem, including 842 children and 128 women, including 24 minor girls.” No Israelis were arrested by Palestinians during that time.

Israel continues to rule over the Palestinian people in the West Bank using the emergency regulations imposed in 1945 by the British when they were still the colonizing power in Palestine. All Palestinians living in the West Bank are tried by Israeli military courts, while the 500,000-plus Israelis living in illegal settlements are subject to Israeli civil law and never to military courts.

The military courts frequently rely on secret evidence provided by the Israeli security services which does not have to be provided to the defendants or their attorneys. In military trials, Palestinians are assumed guilty and conviction is virtually assured, for reasons explained by Addameer:

That these are true “kangaroo courts” is emphasized by the outlandish 99.74 percent conviction rate for Palestinians.

Extreme discrimination pervades every aspect of the Israeli “justice” system.

Israeli law requires Israeli defendants be tried within nine months of arrest, whereas the requirement for Palestinians under military courts is 18 months, which can, once more, be extended indefinitely. Israeli youth must be 18 to be tried as adults; for Palestinians it’s 16.

Once inevitably convicted, Palestinians are subject to highly discriminatory sentences and appeals as compared to Israelis. A Palestinian convicted of manslaughter can get life in prison, while for an Israeli the maximum is 20 years. Israelis are generally released after serving half their sentences, while Palestinians cannot even appeal for a reduction until they have served two-thirds of sentences. And this is just scratching the surface.

Israeli “justice” is part of a complete apartheid system. The killings by the Israeli Occupation Forces, the torture, checkpoints, settlements, house demolitions, destruction of olive and fruit groves, the theft of water, the deadly blockade and isolation of Gaza, the apartheid roads, the apartheid wall, the apartheid everything continue day after day after day.

And yet, confronting this monstrous reality, the Palestinian people continue their struggle inside and outside the prisons. A May 7 statement from the striking prisoners’ leadership stated:

“Our people should unleash their anger and clash uninterruptedly with the Israeli occupation” and “blockade Israeli embassies all over the world and continue to organize rallies and sit-ins and to crowd in sit-in tents in Palestinian cities and villages.”