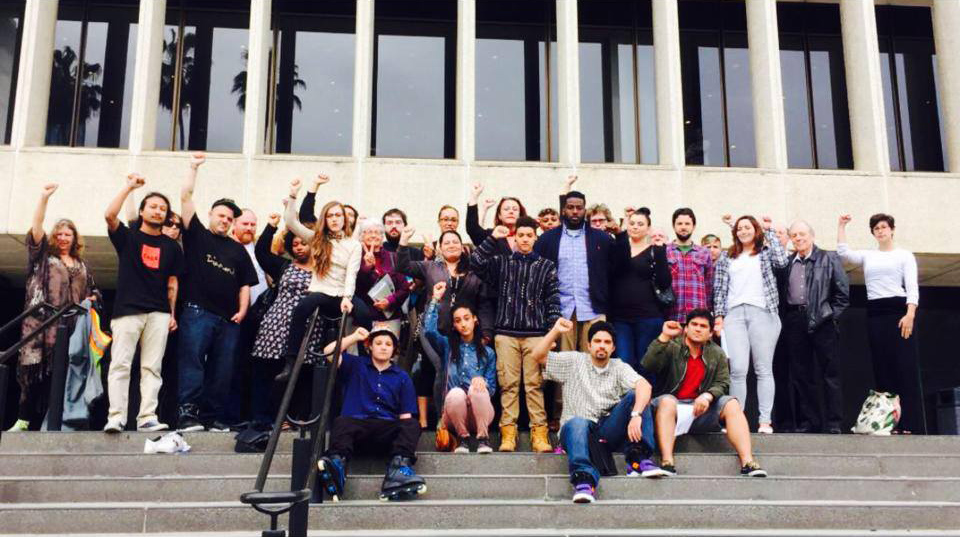 Maile Hampton, 20, is pictured on the steps of the Sacramento Superior Court wearing a blue shirt and pink pants. She is surrounded by activists who came to show support at her initial court appearance on March 16.

The Sacramento police have outrageously charged ANSWER Coalition activist Maile Hampton, a young Black woman, with felony “lynching.” After holding her initially on $100,000 bail, Maile is now out of jail but faces the threat of four years in prison on false charges following an aggressive police disruption of a peaceful Black Lives Matter march in Sacramento. But we are fighting back!

Read about Maile Hampton's case in the media:

Sacramento News & Review: The young and the relentless: Sacramento’s next generation of activists is up in the establishment’s face

1) Click here to sign the petition demanding that the Sacramento County District Attorney drop all charges against Maile Hampton now.

The police and county DA falsely claim that Maile is guilty of obstructing justice and removing a person from police custody -- “lynching” under California law.

Lynching is what mobs of white racists committed against thousands of Black people in the United States. They took Black people from the custody of the police with the tacit consent of the cops and state. The mobs then beat, mutilated, tortured and hanged them. This ironic plot to charge an anti-racist Black protestor with lynching screams arrogance on the part of the cops and the DA. The people see through these charges. We charge the state with lynching. We charge the state with attempting to lynch the Black Lives Matter Movement.

In fact it is the police who are guilty of obstructing justice, in this case and historically. These charges against Maile are in reality "revenge" charges against leading activists of the Black Lives Matter movement. We in the ANSWER Coalition, along with a wide network of endorsing organizations, are mobilizing to fight back against this police repression.

The story that the police and DA present is entirely different from the facts of what actually happened. In reality, on Jan. 18, a peaceful march was disrupted by police who wanted to shut it down because of its political content. The police violated the protestors’ right to free speech and arrested several people. The police were the aggressors, not the activists. The police obstructed justice, not the protestors.

Click here to sign the petition demanding that the Sacramento County District Attorney drop all charges against Maile Hampton now.