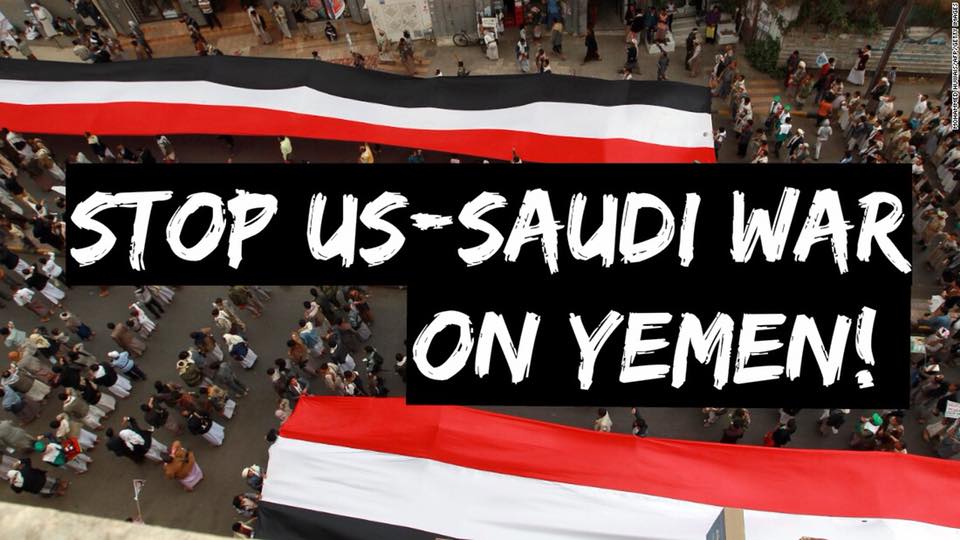 End the US-backed war on Yemen!
US out of the Middle East!

Since 2015, the United States has teamed up with its monarchist allies in the region, particularly Saudi Arabia, to wage war on Yemen, the poorest country in the Arab world. The result of aggression in Yemen by an alliance of imperialists and monarchies has been catastrophic. Aid organizations call Yemen the worst humanitarian crisis in the world today.

Fifteen million people can’t access clean water and sanitation. Nearly 18 million people – 60 percent of the total population – do not have reliable access to food and are at risk of starvation. Between 2017 and 2018, there were 1.1 million cases of cholera. Millions have been displaced from their homes. 150,000 are believed dead from starvation and preventable diseases last year alone, a direct consequence of the aggression on Yemen, the blockade of ports, and the targeting of its civilian and agricultural infrastructure.

There have been more than 17,000 air strikes by Saudi and UAE planes, most by the Saudi air force, which is supplied by the Pentagon. U.S. forces are with the Saudi military, training and advising them. U.S. tanker planes are continually refueling, in mid-bombing run, the U.S. made Saudi planes which are every day dropping U.S.-made bombs on schools, hospitals, weddings, market places, school buses, and homes.

The U.S. objective in the Middle East is to dominate the resource-rich and strategically key area. US backing for war that has destroyed much of Yemen began under Obama and has continued under Trump. Obama sold $115 billion of weapons to Saudi Arabia. Trump has sold $110 billion.

More people are waking up to the atrocities that U.S. aggression is responsible for in Yemen. We demand an end to U.S. intervention in Yemen and the entire Middle East!

Co-hosted by Stop the War Machine