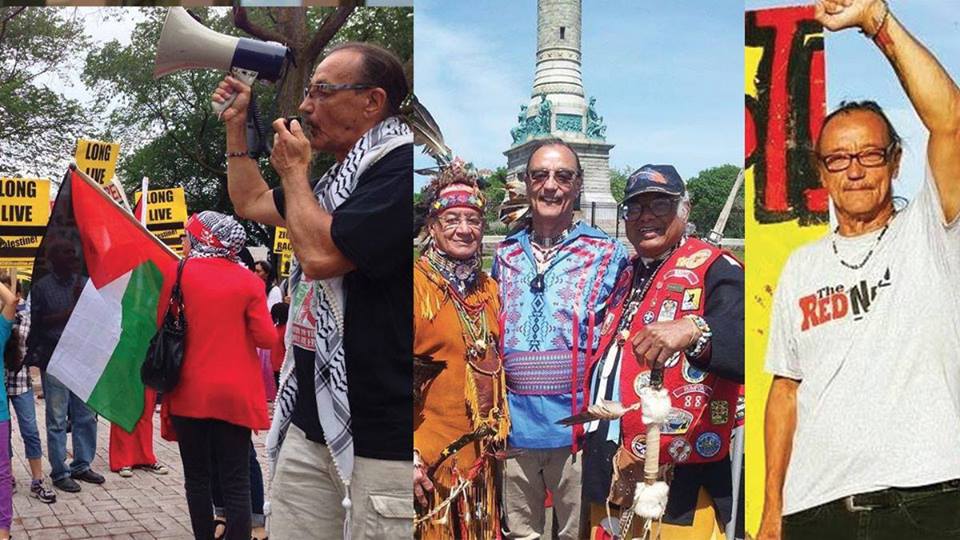 Norman Clement has been an ANSWER Coalition organizer since the Sept 15, 2007 anti-war march on Washington, D.C. He is a leading organizer in Connecticut against police terror and has led many rallies, protests and meetings condemning the NHPD for its brutality against community members and other activists. Norman is also a Water Protector: as a confederate member of the local Quinnipiac tribe, he traveled to Standing Rock twice in 2016 as part of the movement against the Dakota Access Pipeline.

Police targeted Clement for leading chants on a sound system while demonstrators briefly shut down the Route 34 connector in downtown New Haven. Police claimed an ambulance was blocked on the street, however further investigation by the New Haven Independent quotes the ambulance company as saying there was no ambulance blocked. A witness video clearly shows Clement on the microphone as the demonstration reaches the highway saying, "no one gets through unless it's an ambulance." No notice to disperse was ever given and police were aggressively using their dogs to intimidate a lawyer on the scene. State Police were also notified by an attorney at the scene that the protest would move for emergency vehicles. The protest left the street voluntarily and on its own.

State and local police followed the peaceful protest with menacing dogs and waited until the protest was back on downtown city streets to push the crowd of over 100 people on to a small sidewalk. While they were pushing the crowd, the New Haven Police grabbed another man, Nate Blair, and threw him to the ground, arresting him as well. At the same time they targeted Clement using police dogs and mace, singling him out and chasing him, knocking over pedestrians in the process. When he was tackled, police used pepper spray multiple times, seriously injuring his shoulder.

It's clear that Clement was targeted for being an organizer and leader in anti-racist community struggles. This attack is part of a trend in New Haven of police targeting of community leaders: at the same time as this, Norman Clement is active in struggles to defend leaders and community members like John Lugo, Barbara Fair and Holly and Shelton Tucker against regular police harassment.

Police are charging him with 5 crimes in a clear move to intimidate him and others from speaking out against injustice.

We demand: drop the charges against Norman Clement and Nate Blair! End police brutality and harassment!