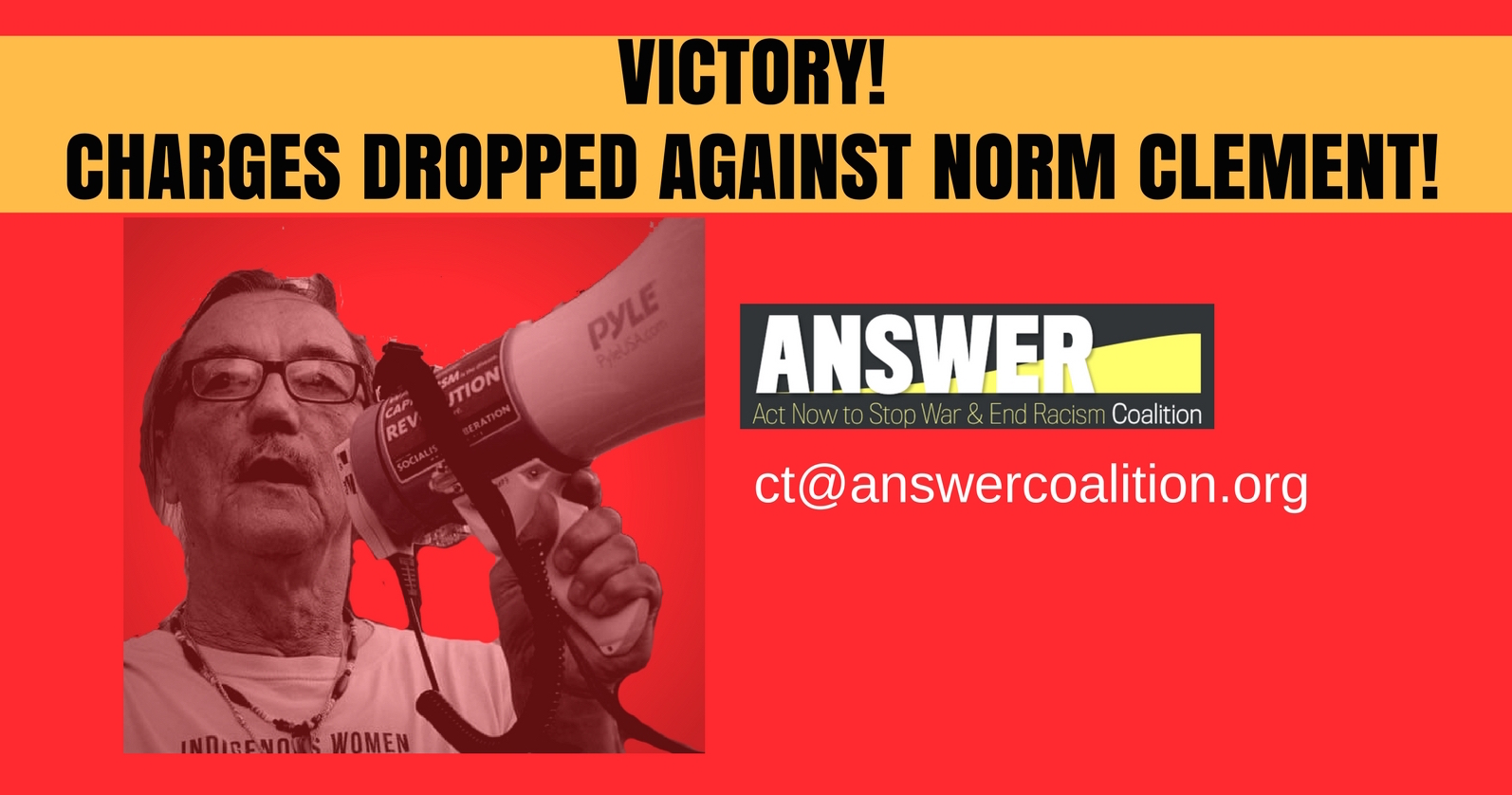 In a victory for protest and resistance, prosecutors were forced on Friday, March 9th to drop the most outrageous charges against ANSWER Coalition organizer Norman Clement stemming from his brutal and unjust arrest at the hands of the Connecticut State Police at the February 4, 2017 protest in New Haven against Donald Trump’s Muslim ban and planned wall on the Mexican border.

In the 13 months since the arrest, prosecutors and the entire court system dragged the case on to wear out organizers and supporters, knowing there was no evidence for the fabricated charges like “inciting a riot”. Prosecutors attempted to pressure Norm to plead out to charges without any evidence to substantiate their charges.  Police lies about emergency vehicles being blocked during the protest were quickly exposed by local media. Police and their mouthpieces in the media tried to paint Norman Clement as a leader of the protest. While Norman is a leader in many movements, the march was a spontaneous response to the outrageous and racist policies of the Trump administration.

As we have said before, we consider it to be no coincidence that the two people arrested on February 4, 2017 were people of color. Norman is Indigenous and Nate Blair, who was pulled to the ground and arrested by the New Haven Police, is Black. We also consider it no coincidence that Norman was targeted for being a well-known organizer against war, police terror and for the rights of Native peoples. In addition to his work in Connecticut, he traveled twice to Standing Rock as a Water Protector. Today’s announcement shows that it is the power of the people coming together that will get justice and fight state oppression.

“I would like to thank everyone here in New Haven and across the country - comrades, allies, friends and family who have supported me over the last 13 months as I battled against the state for brutally arresting and pepper spraying me and using attack dogs on me and all of us out there that day … I feel vindicated. I know that fighting against the racist Muslim ban and against building an apartheid wall on the border was and is the right thing to do,” said Clement.

The ANSWER Coalition sends its gratitude and thanks to the thousands of people across Connecticut and around the country who donated, showed up to press conferences and court dates, signed petitions, spread the word and made phone calls about these cases.

The ANSWER Coalition further stands in solidarity all political prisoners, all those facing the corruption of the so-called “justice system” and with Nate Blair, who continues to fight charges against him. Nate will be back in court on March 30th and we encourage everyone to continue to support Nate in his fight against injustice.