The following is an open letter drafted by Co-Representative and Chief Executive Director of the Corean Alliance for Independent Reunification and Democracy Lee Sang-Jun demanding the release of political prisoner Kim Hye-young. Click here for more information on her case. 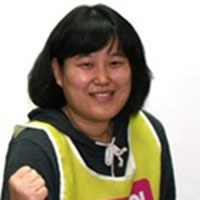 If the prisoner of conscience and cancer patient Kim Hye-young is released, my return to South Corea will be followed to the next in 48 hours.

She needs regular and stable treatment because she got total thyroidectomy two times in 2006. Now she suffers from panic disorder caused by the aftereffect of the killing investigation by the security police inside so-called Okin-dong 'anti-communist' branch of Seoul Metropolitan Police and her fasting with taking the Fifth to resist against them, and by her imprisonment life in Seoul Detention Center without stable treatment.

According to the doctor's psychiatric medical referral on present situation of Kim Hye-young by her outpatient psychiatric doctor, she got anticipatory anxiety for panic attack and physical symptoms of chronic anxiety as panic disorder(cardiopalmus, palpitation, esquinancea, dizziness, numbness of acra). Eventually she got claustrophobia to avoid these symptoms. The outpatient psychiatric doctor found it difficult to continue Kim Hye-young's imprisonment now.

Amnesty International started Urgent Action urging the authorities to release her and to immediately allow her access to adequate care and treatment outside the detention facility. They already sent their message to the Prime Minister and the Justice Minister.

On May 26 2016, the appeal court also sentenced two years' actual imprisonment and three-year disqualification like the first trial with dismissal of appeal. Today is even the 20th day that she has been fasting to protest against anti-human right judge by Park Geun-hye government.

8 members including CAIRD co-representative Lee Sang-hun in 4 detention centers located in Seoul·Seongdong·Suwon·Daejeon and other co-representative named Yang Go-eun in Gwanghwamun square have been fasting for 8 days urging authorities to release Kim Hye-young.

5,200 signatures on online portal site Daum's debate section Agora, 156,300 people on Facebook, 4,800 people on Twitter and lots of domestic netizens, peace·democratic organizations in the U.S., members of the Senate and the House of Representatives in France, French media named L'Humanité and so on are urging Park Geun-hye government to release Kim Hye-young now.

Now that twenty days fasting, she is in a critical condition and even she can hardly drink water.

Therefore I, the co-representative and chief executive director of CAIRD, clearly say to Park Geun-hye government and public authorities including National Police Agency in Seoul as follows:

If the prisoner of conscience Kim Hye-young is released, my return to South Corea will be followed to the next in 48 hours.

So release now Kim Hye-young who is in a critical condition with suffering from cancer, getting panic disorder worse according to her 20 days fasting.

Everyday from June 15 to August 15 which is the valid period of this suggestion, I will hold peaceful protests for immediate release of the prisoner of conscience and cancer patient Kim Hye-young and for peace and reunification of Corea in front of the Brandenburg Gate symbolic place of the reunification of Germany.

Today, I appeal to all CAIRD members to end their fasting.