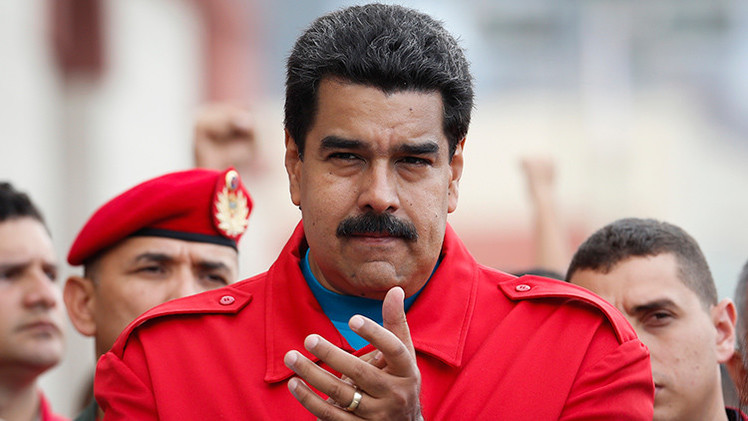 This content was originally published here as “Venezuela’s Maduro Writes Letter to US Citizens” by teleSUR. If you intend to use it, please cite the source and provide a link to the original article.

Venezuelans will campaign for the U.S. to repeal its recently declared sanctions

President Nicolas Maduro and the Venezuelan government published a letter in the New York Times to the people of the United States on Tuesday, March 17. In the letter, Maduro argued that Venezuelans are peaceful people and demanded that the recent sanctions passed by U.S. President Barack Obama March 9 be revoked. Maduro proposed to Venezuelans Sunday that the letter be available in “all the plazas of the country” and be signed by 10 million people. “We’re going to run a giant campaign in every corner of the country, with soldiers, worker-soldiers, workers … and we’re going to … have at least 10 million people sign the letter and send it … to the White House,” Maduro said.

LETTER TO THE PEOPLE OF THE UNITED STATES: VENEZUELA IS NOT A THREAT

We are the people of Simon Bolívar, our people believe in peace and respect for all nations.

More than two centuries ago, our fathers founded a Republic on the basis that all persons are free and equal under the law.

Our nation made the greatest sacrifices to guarantee South American people their right to choose their rulers and to enforce their own laws today. The historical legacy of our father, Simón Bolívar, is always remembered. Bolívar was a man who gave his life so we would inherit a nation of justice and equality.

We believe in Peace, National Sovereignty and International Law

We are a peaceful people. In two centuries of independence, we have never attacked another nation. Our people live in a region of peace, free of weapons of mass destruction, and in freedom to practice all religions. We uphold respect for international law and the sovereignty of all people of the world.

We are an Open Society

We are a working people, we care for our families, and we have freedom of religion. Immigrants from around the world, live among us, whose diversity is respected. We have freedom of press and we are enthusiastic users of social media.

We are friends of the American people

The histories of our people have been connected since the beginning of our struggles for freedom. Francisco de Miranda, a Venezuelan hero, fought with the American people during their independence fight. We share the idea that freedom and independence are fundamental elements for the development of our nations.

The relations between our peoples have always been peaceful and respectful. Historically, we have shared business relations in strategic areas. Venezuela has always been a responsible and trustful energy provider for the American people. Since 2005, Venezuela has provided “heating oil” through subsidies for low-income communities in the United States, thanks to our company CITGO. This contribution has helped tens of thousands of American citizens survive in harsh conditions, giving them relief, and necessary support in times of need, evidencing how solidarity can create powerful alliances across borders.

Incredibly, the U.S government has declared our country a threat to its national security and foreign policyIn a disproportionate action, the government of Obama has issued a “National Emergency” declaring Venezuela as a threat to its national security (Executive Order, 03-09-2015). This unilateral and aggressive measure taken by the United States Government against our country is not only unfounded and in violation of basic principles of sovereignty and self-determination under international law, but also has been unanimously rejected by all 33 nations of the Community of Latin American and Caribbean States (CELAC) and the twelve member states of the Union of South American Nations (UNASUR). In a statement made on March 14, 2015, UNASUR reiterated its firm rejection of these coercive measures that do not contribute to the peace, stability and democracy in our region and called on President Obama to revoke his Executive Order against Venezuela.

We reject unilateralism and interventionism

President Obama, without any authority to interfere in our internal affairs, unilaterally issued a set of sanctions against Venezuelan officials with potentially far-reaching implications, interfering in our constitutional order and our justice system.

We advocate for a multipolar world

We believe that our world must be based on the rules of international law, without interference in the internal affairs of other countries. We are convinced that the relationship of respect between all the nations is the only path for strengthening peace and coexistence, as well as for ensuring a more just world.

We honor our freedoms and uphold our rights

Never before in the history of our nations, has a president of the United States attempted to govern Venezuelans by decree. It is a tyrannical and imperial order and it pushes us back into the darkest days of the relationship between the United States and Latin America and the Caribbean.

In the name of our long-term friendship we alert our American brothers and sisters, lovers of justice and freedom, of the illegal aggression committed by your government on your behalf. We will not allow our friendship with the people of the United States to be affected by this senseless and groundless decision by President Obama.

We demand:
1- The U.S. government immediately cease hostile actions against Venezuelan people and democracy.
2- President Obama abolish the Executive Order that declares Venezuela a threat to U.S. national security, as has been requested by the Union of South American Nations (UNASUR).
3. The U.S. Government retract its libelous and defamatory statements and actions against the honorable Venezuelan officials who have just obeyed our laws and our constitution.

Our sovereignty is sacred

The principles of the founding fathers of the United States of America are followed today with the same dignity by the people of Simón Bolívar. In the name of our mutual love for national independence we want the government of President Obama to think about and rectify this dangerous precedent.

We are convinced that the defense of our freedom is a right we shall never give up because the future of the humanity lies also in our country. As Simon Bolivar said, “The freedom of the New World is the hope of the universe.” “Venezuela is not a threat, but a hope … Independence or nothing” – Simon Bolivar