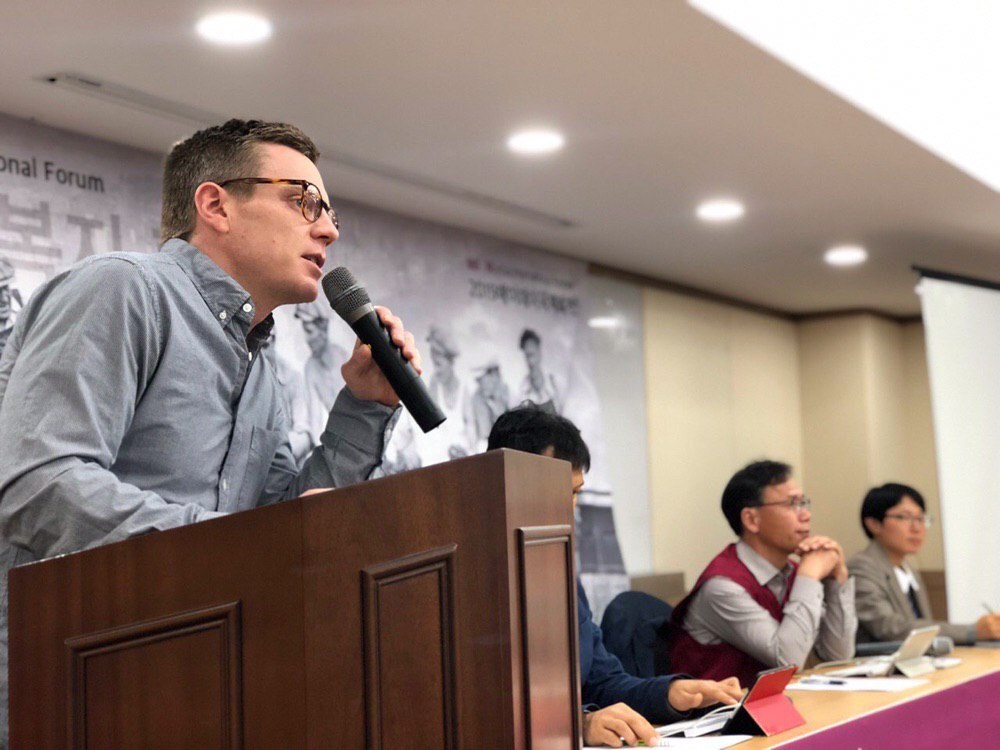 The following interview was conducted by the People’s Democracy Party with ANSWER Coalition organizer Derek Ford, who has worked with the Korean movement for several years. The interview was translated and published in their Party organ, The Locomotive.

PDP: What is your opinion and wish about the revolution and reunification in Corea?

Derek: While the situation has changed quite drastically in the last two years, I remain as hopeful as ever for the peaceful reunification and democratic revolution in Corea. This is because it has been and will continue to be the Corean people themselves—on the peninsula and overseas—who are the real driving force of history.

What is your analysis of the current international situation?

The defining feature of the current international situation is the peaceful rise of the People’s Republic of China, which has provided an alternative model of development for so much of the world. While not without contradictions, China’s ascendancy has helped to push back U.S. imperialism. It has also coincided with an increase in social movements in the U.S., which pushes the class struggle forward at home and abroad.

At the same time, the situation is defined by a growing U.S. hostility against China. It is clear that the Pentagon is clearing the way for a new Cold War with China.

The Gwangju Commune is similar, yet for me what is most distinctive about it is that it demonstrates the fact that the people can immediately be mobilized in mass numbers to change the world. It shows the workers and students and other forces of society can combine in action and that, when they do, their energy can be explosive.

Both, of course, show the strength of the class enemy and the forces we are up against. They also show that the movement must be internationalist so that, for example, we in the U.S. can restrain our government and military while the Corean people take control over their own destiny.

What do you think about the military tensions in the Corean peninsula, around Taiwan and in the Persian Gulf?

The first reason has to do with the Pentagon’s “Great Power Rivalry” doctrine, which is aimed at China and, to a lesser extent, Russia. Trump and now Biden are on a path of confrontation with China and we must unite to defend China’s sovereignty and territorial integrity. The second reason has to do with continued U.S. hostility towards the Democratic People’s Republic of Korea. The U.S. has not been able to defeat the DPRK since 1948, but it has never stopped trying.

What are your memories and impressions of the struggles and events you participated in during MIF in Seoul in 2019?

The May Day International Festival in 2019 was an incredibly inspiring and impressive event. It demonstrated first that the People’s Democracy Party is ambitious and that it is serious about growing and leading the struggle for people’s democracy in the south. It demonstrated their deep connection to movements worldwide, as well as the diversity of tactics and strategies they deploy.

Personally, for me it was inspiring to see how the PDP continues to grow and recruit and maintain such an impressive level of activity. Returning home, it made me organize even harder!

What are your memories and impressions of the PDP Congress in Seoul in 2018?

I have to say it was an honor for me personally and for our organization to be present at the PDP Congress in 2018. To hear and see and feel the determination of the cadres was inspiring. It was also notable that so many of the members are young although they have been active for a long time. This shows you are growing a Party with an eye toward the future and toward victory.

Do you have other messages for the Corean public?

The ANSWER Coalition will continue to do everything we can to force the U.S. to sign a peace treaty with the DPRK and to normalize relations with the DPRK, to withdraw all U.S. troops from Corea and East Asia, and to pay reparations for the physical, bodily, and psychological damage it has done over the last 70 plus years.