Why We Are Marching on March 21 - Statement from Brian Becker, ANSWER Coalition

On Saturday March 21, 2015, join us to say NO to authorization for new war in Iraq and Syria 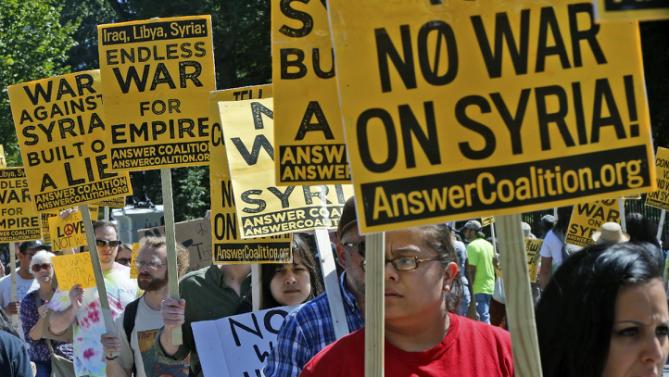 A statement by Brian Becker, Director of the ANSWER Coalition

On Saturday, March 21 the ANSWER Coalition is taking a lead role, as part of a broader coalition, in organizing a National March in Washington, D.C., to oppose the policy of “endless war" in Iraq, Libya, Syria and elsewhere in the Middle East. The March 21 National March will gather at the White House at 12:00 Noon and will be the culmination of four days of actions in the Capitol. The events are being organized under the banner of Spring Rising.

I hope you will participate in these actions, spread the word and show your support.

This message is written to explain why we consider the situation now to be of critical importance.

We are on the eve of what is being planned as a decades-long war — a war that will expand and grow. Although there was a promise by the President to “limit” the war, that should be understood as merely a talking point to soothe a skeptical public. If Obama had said that he was ordering a new “surge” of tens of thousands of troops to Iraq there would be massive anti-war protests in the streets of this country.

The President couldn’t risk that. Neither could the chest-thumping Republicans who always depict Obama as a weak leader. They too are afraid to tell the public that this is just the start and that the commitment will lead to a huge number of troops in Iraq — that military advisers and trainers will not succeed in defeating the Islamic State and that their failure will result in a steady expansion of U.S. troops to the battlefield.

Despite the initial promise of “No Boots on the Ground” we now see several thousand more U.S. troops in Iraq. On February 14, the Pentagon announced that it is sending a 4,000-strong brigade equipped with heavy weaponry to Kuwait. Massive U.S. airpower is deployed on bases and ships in the region. Iraqi cities and towns will be bombed again but the “limited war” will not succeed any more than it did in Vietnam and thus there will be a call for more and then more troops.

The U.S. Army has set up a Division Headquarters in Iraq. The only reason to establish such a Headquarters is for it to lead a Division. The Division hasn’t arrived yet but it will. A Division consists of 20,000 troops.

The problems in Iraq and Syria today are the consequences of U.S. military action. More U.S. military action now will strengthen the Islamic State, not weaken it. The catastrophe of an open-ended U.S. war will impact not only the people of the region, but the entire globe. To say that the stakes are high does not capture the magnitude of the possible disaster.

Now is the time for people to go into the streets to say NO to Congressional authorization for endless war.

There is a great deal of confusion about what the Obama administration is doing and why they are doing it. The confusion is caused by the deceptive presentation about the U.S. military struggle against the so-called Islamic State.

The Islamic State has established a formidable military presence in Iraq, Syria and Libya, and its influence is growing in other countries as well.

We must tell the truth, expose the lies and help the people of this country understand how they are being deceived by the Pentagon and the leadership of both the Republicans and Democrats.

The U.S. military strategy in the Middle East has been and is the primary catalyst for the growth of the Islamic State. Now, fighting the Islamic State is the public rationale for authorization for an open ended war by the Pentagon in the Middle East. That will require military bases, thousands of troops, fighter jets and hundreds of billions of dollars in military expenditures.

The Pentagon destroyed the secular governments and state apparatus in Iraq and Libya that created the political space for the rise of the Islamic State and other right-wing Islamic militias. The CIA, through Jordan and Turkey, coordinated the massive foreign arms flow into Syria to those the State Department and the mainstream media labeled “freedom fighters” from 2011 to 2014. Flush with arms and funding from abroad, and their victory in Libya, these armed units successfully captured large areas of Syrian territory from the government. These spaces have been used to create the so-called Islamic State Caliphate.

In August/September 2013, Secretary of State Kerry and his neo-conservative friends in Congress were demanding that the United States start the massive bombing of the Syrian Army. That was prevented only by the grassroots anti-war opposition in the United States, Britain and elsewhere. Kerry and McCain led the charge for the bombing of the Syrian Arab Army at that time and not once during that entire episode did they call for military action against the Islamic State. By then (August/September 2013) the Islamic State and the Al-Qaeda-affiliated Jabhat al-Nusra were the dominant military force in the armed opposition in Syria and would have been the prime beneficiary of U.S. military action.

The rise of the Islamic State is the direct outcome of U.S. military policies

Without the criminally destructive actions of U.S. politicians and the Pentagon high command, the Islamic State would not exist today except perhaps as a very small entity.

Under the direction of George W. Bush, Dick Cheney and Donald Rumsfeld, the Pentagon invaded Iraq. U.S. authorities immediately dissolved the national government and the national army. Since the UN would not authorize this action, the Bush White House premised the “legality” of its actions on the spineless Congressional Authorization of October 2002.

As a direct result of this premeditated act of aggression, the nation of Iraq fragmented along ethnic and sectarian lines. Bush and Cheney, after ordering the dissolution of the Iraqi government, established their own military dictatorship in Iraq under the control of the Coalition Provisional Authority (CPA). Led by an American, L. Paul Bremer, who did not even speak Arabic, the CPA tore up Iraq’s Constitution and set about to re-create Iraq under the tutelage of American military occupation. From the beginning, the U.S. occupation, both wittingly and unwittingly, fragmented Iraq along ethnic and religious lines.

In response to the Iraqi armed resistance – unanticipated by Washington – against the occupation that began in the summer of 2003, U.S. officials consciously re-organized and funded Iraqi political life and the government on a strictly sectarian basis: A Shiite would be Prime Minister, a Kurd would be President, a Sunni would be the Speaker of the National Assembly. And then, starting in 2004, in an effort prevent the emergence of unified, nationwide Iraqi resistance front, U.S. occupation officials and the Pentagon and CIA started funding militias whose identity was anchored in religion or ethnicity. It was a classic divide-and-conquer tool that British colonialism had employed in the Indian sub-continent and throughout its far-flung empire.

It was precisely U.S. policies that fragmented Iraq. And today, Iraq as it existed up until 13 years ago is no more. That is why the Islamic State exists as a force in Iraq.

The areas that the Islamic State now control are the population centers that were bombed and occupied by U.S. military forces, marginalized and brutalized by the U.S.-created central Iraqi government and the sectarian militias who supported the government.

As we know — and knew then — the invasion of Iraq was based entirely on lies. It was an aggression based on power alone.

The criminals who ordered the invasion and occupation of Iraq were not arrested nor are they demonized in the U.S. media. In fact, both Bush and Cheney are making large sums of money giving speeches, engaged in partisan fundraising, and writing and selling books while they appear on television talk shows to render their opinion on this or that issue.

For those who argue that the “United States must do something” in Iraq, it must be pointed out that the “something” is the bombing of the very cities and towns in Iraq that the U.S. military bombed and brutally occupied during the Bush years. The “something” is the arming and directing of sectarian militias and the national Iraqi army that for the past years has carried out a reign of terror against the population centers that are now under the control of the Islamic State.

It is important to think through the contradictory public positions adopted by the U.S. government — again, including both its Democratic and Republican wings.

U.S. foreign policy is an imperialist policy. Having wreaked so much destruction and suffering on the peoples of the Middle East, it is either crudely naive or an act of unabashed cynicism to assert that the Pentagon can be the agency to bring justice in the same countries it violently destroyed. The growing strength of the Islamic State and other such reactionary political forces is a dominant problem for progressive people in the Middle East and throughout the Muslim world. For the past half century, the U.S. foreign policy and military strategy has been to destroy leftist and secular anti-imperialist movements and governments that constituted the leadership of the anti-colonial and anti-imperialist movements in the region. Having fulfilled that agenda, the officialdom in United States should not act surprised that loathsome organizations like the Islamic State have risen to fill the void.

Progressive forces in the Middle East are locked in a life-and-death struggle for the leadership of society against brutal reactionaries like the Islamic State. U.S. military action is not designed to nor can it help them. We, in the West, can offer political support and solidarity for their struggle to rescue the region from imperialism, the reactionary monarchies, the Israeli military machine and the revanchist reactionaries like the Islamic State.

For our part, progressive people in the United States have to mobilize now against the policies of our “own” government that has created a firestorm of destruction in the Middle East and now seeks “authorization” for decades more of war in the same countries and against the same peoples. Authorized by an imperial establishment, the policy of endless war that will be carried out by the Pentagon military machine can only lead to more suffering – neither peace nor liberation for the targeted peoples.

It is urgent that we revive the broad anti-war movement. Let’s start with the March 21 National March gathering at 12:00 Noon at the White House and by joining in the other actions scheduled in the days before in Washington, D.C.

Statement of Brian Becker, Director of the ANSWER Coalition

For more info go to: http://www.ANSWERCoalition.org.
Click this link to make an urgently needed donation to build the anti-war movement.