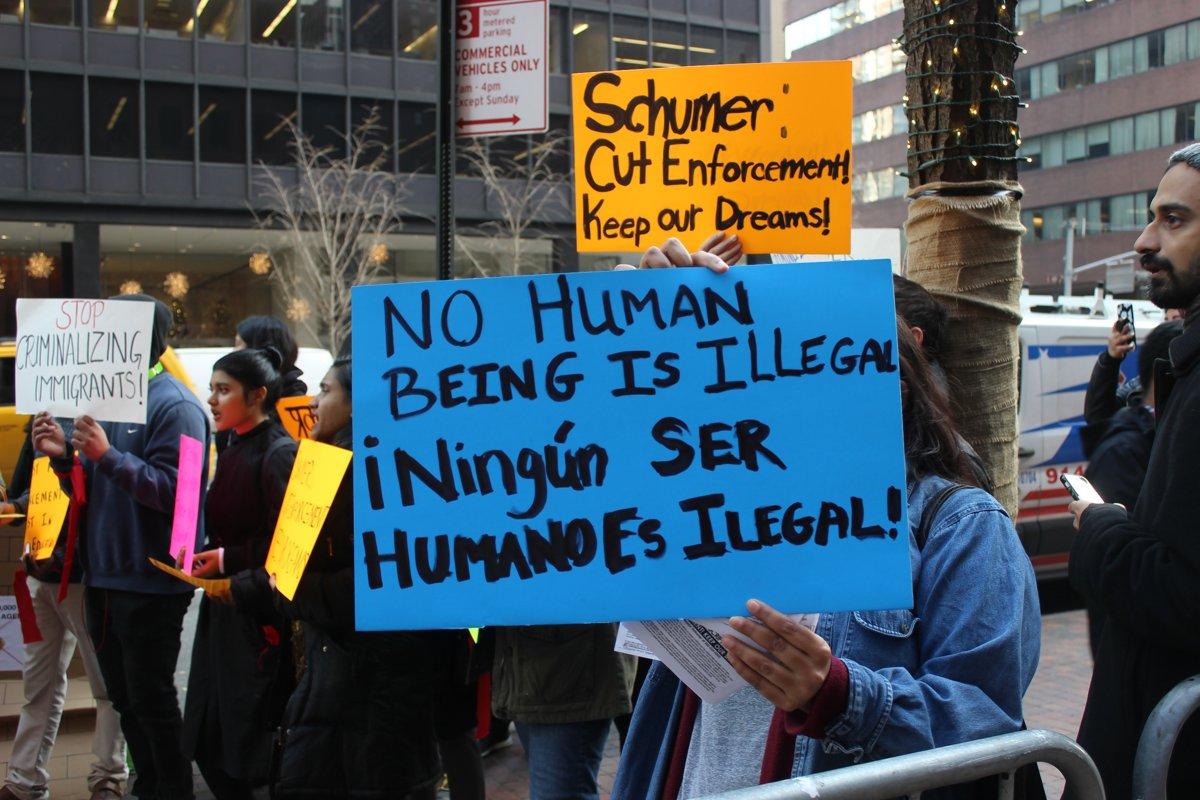 The 60-hour government shutdown is over, a short-term funding bill has been passed and now the expiration of DACA (Deferred Action for Childhood Arrivals) is fast approaching. Approximately 800,000 young immigrants are set to lose their protection from deportation on March 6. Congressional Democrats had been saying that they would not fund the government without their status being resolved. Now they’ve gone back on their word, and brought the Dreamers to the edge of the cliff after eliminating their most significant piece of leverage, and handing all the negotiating power back to Trump and the Republicans.

This betrayal of immigrants and Dreamers is being put primarily on the “moderate” Democrats, led by Sen. Schumer (D.-N.Y.), who joined with Republicans to end the shutdown. All they received in return was a “promise” from Republican leader Mitch McConnell that immigration would be taken up before the DACA deadline.

Also notable is the role of the “red-state” Democrats, including newly elected Sen. Doug Jones of Alabama. Throughout the weekend these Senators repeatedly expressed their desire to cave to Trump, guided entirely by their own re-election calculations rather than fidelity to any principles of justice, human rights or the Democratic Party’s own platform. It is noteworthy that liberal Democratic groups mobilized nationwide and raised tens of millions of dollars for Jones in Alabama — which they said was the way to stop Trump — but Jones, once in office, immediately reoriented towards Trump voters, turned his back on the Black voters that got him elected, and helped sink the liberal strategy.

But there is plenty of betrayal to go around when it comes to the Democrats in the Senate. Leader Sen. Schumer and the rest of the leadership spent the whole weekend practically begging Trump to accept funding for the border wall as part of a deal. On the Senate floor, Schumer himself declared: “I put the wall on the table in exchange for strong DACA protections. … It was a generous offer.” Canceling DACA had always been Trump’s cynical maneuver to gain some leverage for a border wall — as Trump rather openly admitted months ago. Now Schumer was just offering that very deal back to him, giving Trump everything he wanted. This was the essence of the Durbin-Graham “bipartisan compromise” that was proposed shortly before the shutdown.

According to Vox, that proposal offered to “decrease the number of people coming into the US legally each year and give Trump the resources to start his ‘wall’ in exchange for substantially increasing the number of current immigrants eligible for permanent legal status.” It would have likewise prevented Dreamers from sponsoring the legalization of their parents at any point, even after becoming citizens — leaving their parents permanently under threat of deportation.

It was only the intervention of the far-right Republicans in the administration and Congress—and Trump’s own racist outburst in the meeting—that sabotaged the deal. These forces want an even harsher reconfiguration of immigration law that will practically eliminate family-based immigration and dramatically reduce openings for new immigrants from underdeveloped countries. Trump’s remarks merely brought to the surface the white supremacy of these “hard line” politicians.

Of all the Senate Democrats who love to voice their support for Dreamers and say they oppose the wall, none condemned Schumer’s offer to build it. That includes Elizabeth Warren, Cory Booker, Kamala Harris and Bernie Sanders. They voted against ending the shutdown, but all motioned their support of this original bipartisan “compromise.” Rep. Luis Gutierrez (D.-Ill.) even offered to help build the wall — “I’ll take a bucket, take bricks, and start building it myself,” he said. “We will dirty our hands in order for the Dreamers to have a clean future in America.”

This is opportunist politics at its most cruel — a “deal” that would put 90 percent of undocumented immigrants in the same vulnerable situation, and concede to a wall that will lead to many more deaths at the border.

It is also completely against the spirit of the immigrant rights movement and the brave DREAMers who have taken action for years. Their activism compelled Congressional Democrats to rhetorically support a “clean DREAM Act.” But in truth Democratic politicians consistently evaded the immigration issue in previous spending battles and then behind closed doors they buried any notion of a clean DREAM Act.

The Cosecha Movement, which has been holding direct actions across the country in recent months to demand a shutdown if a clean DREAM Act was not passed, issued a statement Jan. 19: “We have reached this shutdown after undocumented community showed the risks they are willing to take. We striked, we sat-in, we went to jail, and we refused to cooperate. And this pressure pushed the public to choose a side. Undocumented immigrants have been used as bargaining chips for months and we refuse to allow that to happen in silence.”

The Democratic Party has decisively answered that bravery with cowardice and betrayal. Their capitulation on the wall also stands in stark contrast with their own base. A recent poll showed that 87 percent of all people in the U.S. support the Dreamers and 61 percent oppose the wall, including 88 percent of Democrats.

Progressive people, including those who marched this past weekend with homemade signs in support of immigrants and against the wall, must oppose both the Republican bigots and all the Democratic politicians who facilitate their bigoted policies and who so quickly caved to them today.

A mass in-the-streets movement of immigrants and their supporters is needed throughout the month of February. Democratic leaders, now walking down the path of complete capitulation, have eliminated their own leverage and already displayed their willingness to offer criminal anti-immigrant policies to Trump in the name of “compromise.”

Congressional Democrats have essentially declared that immigrant families must be further destroyed, and future immigrants must be further criminalized, in the name of winning over “moderate Republicans” in 2018 congressional contests. But there is a greater social force that can be brought to bear: the vast power of the immigrant working class, the youth, and all class-conscious workers. That social force shut it all down in 2006, and would change everything if mobilized again.

Not one more deportation! Full rights for all immigrants!