Sign the petition: Stop the IRS attack on IFCO!

The ANSWER Coalition is outraged by the IRS attack on IFCO and urges its supporters to sign the petition denouncing this act of intimidation against the international solidarity movement. Below is a statement from IFCO Executive Director Gail Walker. 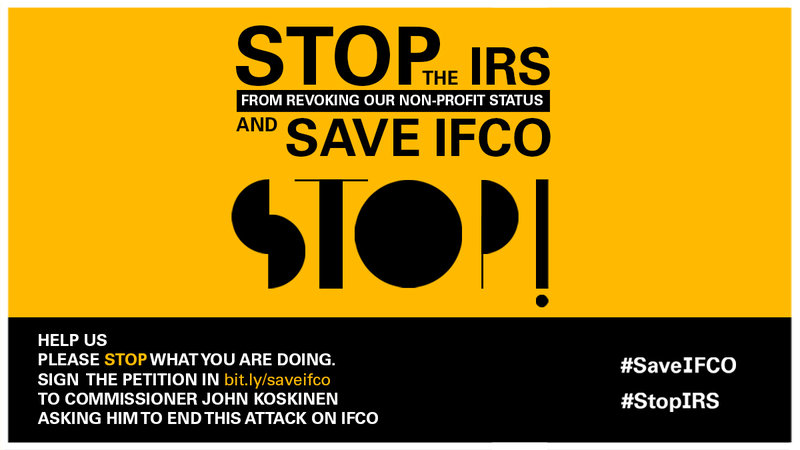 Dear Friends and Supporters of IFCO,

After years of continuous delays and unresponsiveness from the Internal Revenue Service (IRS), the Interreligious Foundation for Community Organization (IFCO) has been informed it will be stripped of its tax-exempt status. Revocation of our exempt status could happen within the next few weeks unless we act now!

This prolonged examination and threat of revocation is unwarranted and is an abuse of discretion. It happens as we fulfill our duty as people of faith in solidarity with those who have experienced injustice at the hands of U.S. foreign policy makers - this includes the people of Palestine and Cuba. Like Moses who was punished when he stood up to Pharaoh, IFCO is being attacked for standing up to the powers to resist injustice.

Ironically, this attempt to cripple the first national foundation run by people of color, comes in the quiet of the end-of-summer:

So why is this happening now?

The IRS's audit of IFCO, which lead to this decision to revoke our tax exempt status, began in 2009.

Initially, the audit was sparked by IFCO's fiscal sponsorship of Viva Palestina, the U.S.-based component of the UK-based organization that delivered humanitarian aid to the beleaguered people of Gaza and that was accused by tea-party advocates of supporting terrorism. We fought back and proved that Viva was a legitimate charity.

The IRS then claimed that our work to bring humanitarian aid and friendship to the Cuban people was done in violation of the Treasury Department's "Trading with the Enemy Act." Once again, we fought back. We declared our rights as people of faith and conscience to stand in solidarity with our friends and family in Cuba. We challenged the IRS's ability to make this claim. It was, in reality, a question for the Office of Foreign Assets Control (OFAC), the division within the Treasury Department which has jurisdiction over these matters. OFAC, fully aware of our annual caravans, has never prosecuted us. How and why is the IRS using our caravan work against us?

Finally, after we fought back against all these attempts to shut us down, now the IRS is claiming that they want to revoke our tax-exempt status over "sloppy record-keeping".

The IRS claims there are missing receipts for some of the IFCO projects in 2009 and 2010 (the years of the audit). In reality, the majority of receipts for those years DO exist and any misplaced receipts represent a minuscule percentage of IFCO's revenue in those years.

We firmly believe that to base the tax-exempt revocation of a 50-year-old civil and human rights organization on such a small issue is nothing short of extreme. We would accept a request to reform the way we maintain records going forward - and we have already instituted these changes - but revocation is an extreme and unwarranted remedy. In fact, even before the audit was completed, the IFCO Board of Directors passed a resolution that "officially" improved our record-keeping procedures.

Click this link to see an example of the kind of record-keeping IFCO maintains for its projects. This package illustrates, for example, how from the initiation of a caravan until then end, we keep track of all records related to donations and ensure that all disbursements are associated with the tax-exempt purpose connected to the caravan project.

We know you would agree that these actions by the IRS undermine the rich legacy of this organization and our founding director - the late Rev. Lucius Walker, Jr.  Six years after the death of Rev. Walker, the U.S. government is attempting to drain IFCO of its financial resources and to distract us from our important work in the pursuit of justice.

The bottom line is that IFCO's future is at risk, despite its 50-year-old history of working for social justice. We vehemently reject this attack on our work and ask you to stand with us as we continue to fight back.

We need your help to shine a light on this historic injustice!

It is important that you - our friends, supporters and partners in the struggle for justice - know that, even as we continue to fight the IRS, we are discussing alternative plans to maintain the daily operations of IFCO, and to protect your tax-deduction for future contributions as well as the work of our fiscally-sponsored projects.

We are committed to continue this struggle and hope we can count on your support. As the Bible says: Let us not become weary in doing good, for at the proper time we will reap a harvest if we do not give up. (Galatians 6:9)

Please join us in standing up to this unfair treatment from the U.S. government!

Sign the petition opposing the IRS attack on IFCO