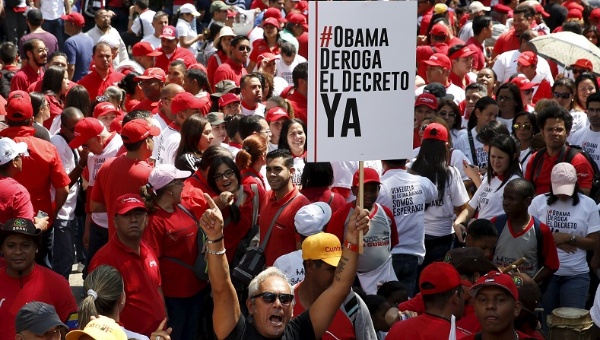 On March 9, President Barack Obama  signed an Executive Order declaring Venezuela to be an "unusual and extraordinary threat" to U.S. "national security" and imposed sanctions on that country. This outrage has been condemned throughout Latin America and throughout the world.

All 33 member states of the Community of Latin American and Caribbean States (CELAC) have energetically opposed the U.S. government’s declaration, as well as the G77+China entity, which includes 134 countries.

In Venezuela a mass petition campaign calling on President Obama to “repeal the decree” has already collected a staggering eight million signatures inside the country. There have also been five million tweets supporting Venezuela.

ADD YOUR NAME TO THE PETITION!

Venezuela is asking those of us in the rest of the world to add our names to their online petition. Click here to add your name and tell Obama "Repeal the Executive Order! Venezuela is not a threat!"

If you haven't yet read it, click here to read Venezuelan President Nicolás Maduro's powerful letter to the people of the United States (English appears below the Spanish) explaining why Venezuela is the very opposite of a threat.

The millions of petition signatures will be delivered to the Summit of the Americas in Panama, which starts April 10 and concludes April 11. Unity and mobilization to defend Venezuela’s Bolivarian Revolution is the key to stop U.S. aggression and assure the country’s sovereignty and progress.