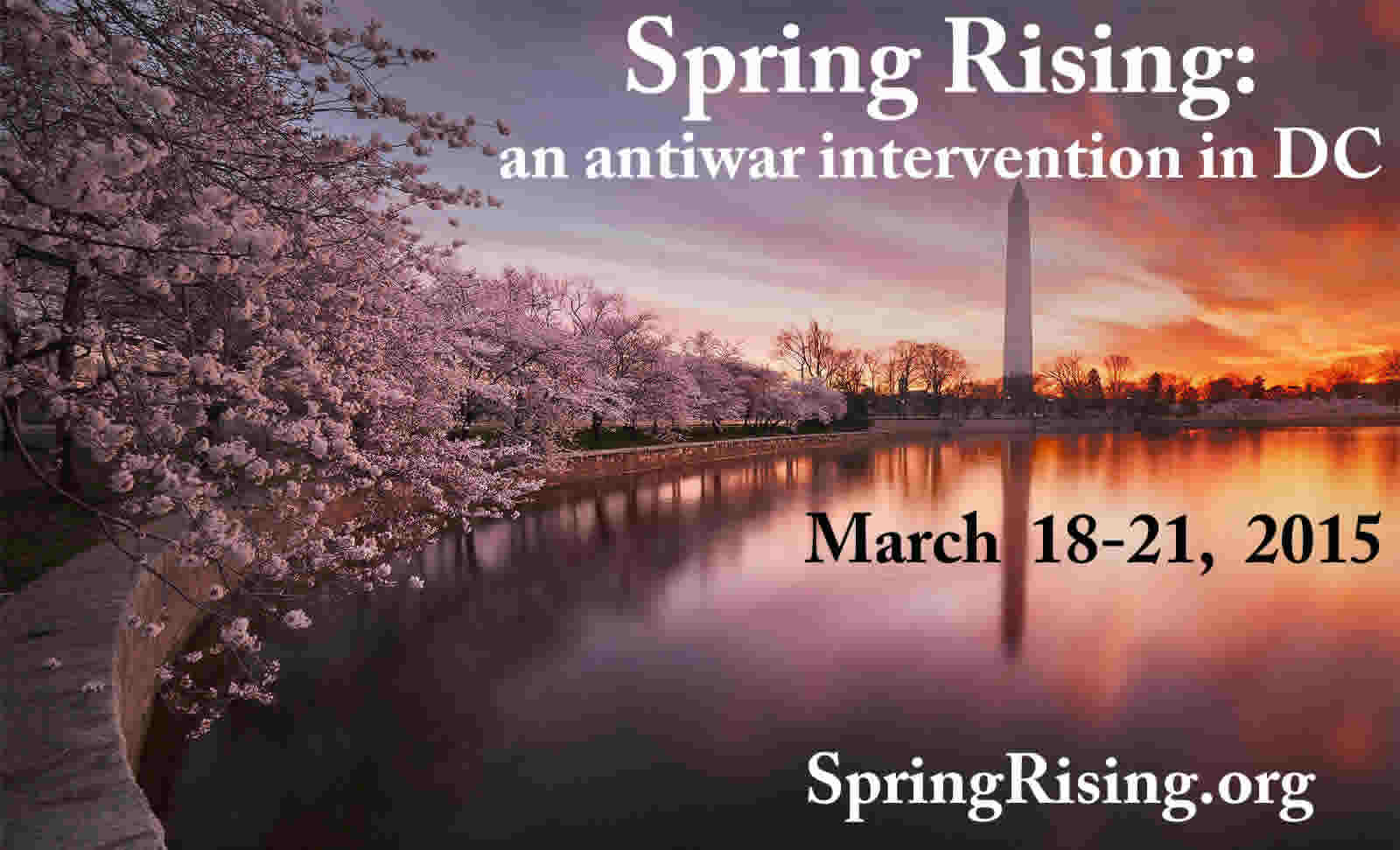 The ANSWER Coalition is an endorser and is mobilizing its members, supporters and the larger movement to support an important series of events that culminate in a rally and march on Saturday, March 21, marking the 12-year anniversary since the 2003 invasion of Iraq and opposing the ongoing U.S. war, which has been recently restarted in a new form.

“Spring Rising” is four days of creative resistance; theater, teach-ins; rallies and marches marking the anniversary of the United States’ "shock and awe" attack on Iraq and its invasion and occupation in a completely illegitimate, immoral war.  Together we will use this time to oppose the plans and calls for growing military intervention.

As we send this invitation to you the Congress is calling for more war. The President has just told us a new global “war on terror” may be unlimited in space and time.

Then, join us! Your participation in Spring Rising is urgently needed now to organize protests, participate in teach-ins and to put your art and performance on mass display. Together we can create the vibrant resistance needed to show that terrorizing the world is not in our interest and “not in our name.”

These days together will be vitally important for building the movement we need to oppose war and the violence and oppression of empire at home and abroad.

Here's the schedule so far:

1:00 pm – 5:00 pm People’s Uprising Tour: From Empire and War to Justice with Peace.
1:00 pm pick­up U.S. Capitol (specific place TBA)
End, White House.
Bus tour organized by the Peoples' Soapbox Network to offices of those agencies & companies who plan, profit from and are complicit in war crimes of empire. Details

11:00 – 12:30: From Ukraine to ISIS to Drones: Why We Must Demilitarize US Foreign Policy.
Speakers: Marjorie Cohn, Matthew Hoh, Raymond McGovern

7:00 - 9:00  U.S. Wars of Aggression and Islamic Jihad: What is the Danger, and How Should the Anti-war Movement Respond?
Speakers: William Blum, Alan Goodman, Raed Jarrar, Cindy Sheehan,

Rally and March
Rally: 12:00pm
Organized by ANSWER
Gather at Layfayette Park across from the White House
Confirmed Speakers: Cindy Sheehan, Debra Sweet, David Swanson and Brian Becker.
Many more to be confirmed

March: 1pm- We will be marching from Layfayette Park through China Town and end at the Capitol where there will be a brief rally. Along the march route we will be stopping at designated intersections and locations for mini rallies, actions and speakers.
Details

Warming Centers
...will be available for music, cultural exchanges, meeting up, banner making.
For info on the following Warming Centers, please email [email protected] or call 202-390-2449.

Spring Rising will comprise a number of events including a large rally and march, a teach-in, and lobbying. Its goal is to increase opposition to wars and militarism, and in particular to U.S. military operations in Iraq, Afghanistan and Syria, as well as all U.S. drone attacks and surveillance worldwide. Spring Rising advocates the closure of U.S. military bases overseas, and the dismantling of the U.S. nuclear arsenal. We urge the demilitarization of police forces and a halt to their targeting of minority communities. We seek to increase understanding of and resistance to U.S. military operations' acceleration of climate chaos.