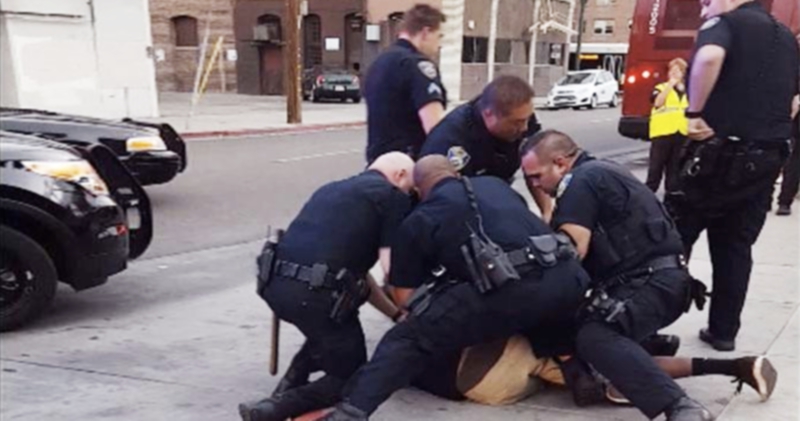 After allegedly jaywalking to catch his bus, a teenage boy was viciously clubbed in the face while pinned down by a Stockton, Calif., Police Department officer. The officer then shouted commands at the boy, who by this time was stunned by the blow and holding his face. Soon after, eight more officers arrived and slammed him to the ground while others made sure there was no resistance from the onlooking crowd.

The watching crowd, which included one woman who refused to stay silent and was letting the cops know that what they were doing was wrong, knew that any one of them could have been that young man being assaulted by law enforcement. This is the real reason for the amount of brutality exercised. (Watch video of incident.)

This brutality was yet another example of the terror tactics used against the poor and working class of the city of Stockton. In front of everyone, Stockton PD demonstrated that they were the ones in control and what they say goes regardless of the rights or safety of those they are entrusted with protecting and serving.

But this same show of force also betrays their weakness. As they stand surrounding the 16-year-old whose very existence was marked as a threat on that day, they themselves are in fact surrounded by everyday people on their way to school, work or the store. These people, and their potential to put an end to the unjust system of police tyranny, were the real threat and the real reason why one or two officers were not enough for this adolescent young boy.

These kinds of overreactions and disproportionate displays of force, much like the military reactions seen this past year in Ferguson and Baltimore, demonstrate both the fragility of the capitalist system as well as the revolutionary potential of the youth.

On Sept. 17, a group of protesters went from the Regional Transit station where the incident took place to the county courthouse to demand justice. The diverse crowd included the mother of James Earl Rivera Jr. who himself was shot down at the tender age of 15 by Stockton PD. Dionne Smith-Downs has been central to the struggle for police accountability in Stockton and marched alongside other victims of past brutality. Despite attempts at intimidation by SPD, the people’s voice could not be silenced.

With the popularity of the Black Lives Matter movement growing with each instance of police brutality, more and more people see that not only are the police working exclusively to protect property instead of people, they are also working to preserve a system of economic exploitation that has far-reaching effects. It is their brutality that has enabled unions to be rolled back, corporations to consolidate their power, and war to be exported to every corner of the globe.

It is also their brutality that has allowed poor and working-class communities to become gentrified, to have their wages remain stagnant, and to see their public education fall by the wayside, all in favor of so-called redevelopment and beautification. As more people express their dissatisfaction with these business-oriented policies, it is the police who step in and try to make sure that no organized opposition is allowed to take root.

However, history has shown that there is no injustice that goes without resistance. Despite examples of daily brutality and mistreatment, the people of Stockton have refused to stay silent and have instead organized and resisted police terrorism.