Struggle for equality at the Supreme Court 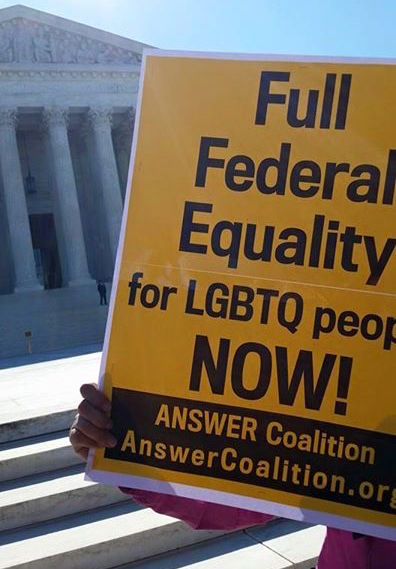 Outside the supreme court during April 28, 2015, oral arguments.

Hundreds of people came to the U.S. Supreme Court this morning to witness oral arguments in the marriage equality cases—whether they were among the few who could get inside to hear the arguments in person or instead demonstrated outside.

Two years ago, the Court accepted narrow and limited questions related to marriage equality, ultimately striking down DOMA’s ban on federal recognition of same-sex marriages and reinstating the original federal court decision on Proposition 8, but not resolving the fundamental right to marry.

Despite the directness of the official “questions presented,” there are technical sub-questions that will need to be worked through. Most essentially, the Court needs to decide the “level of scrutiny,” which determines what the state has to show in order to be allowed to discriminate. Some forms of discrimination by the state are not closely reviewed. For instance, if a certain government job requires an accounting degree, the courts aren’t going to be overly suspicious of treating people with degrees different from those without; the government need only show a “rational basis” for the requirement and that it’s not a pretext for something more insidious. But when a state discriminates based on a suspect class, such as race, then the government must show a compelling reason for that discrimination and that it is doing no more discrimination than necessary to meet that need. It is an open question whether sexual orientation discrimination is suspect, requiring “strict scrutiny,” or not, requiring only “rational basis.” There may be mid-point options, too.

Marriage equality advocates almost certainly will win if a majority frames the question as access to “marriage,” a fundamental right, which cannot be denied without a compelling reason. If instead a majority rules that sexual orientation is a suspect class, not only would they win on marriage equality, but the rationale would have very far-reaching implications for other areas of life where LGBT people face discrimination (for example, government jobs or adoption proceedings). They also could (but may not) win even if the Court relies on a “rational basis” standard, which explains some of the arguments we heard today, as discussed below.

It is notoriously foolhardy to try to read too much into the questions that Justices ask during oral arguments. A challenging question may be put forward because the Justice is suspicious of that side’s arguments, or it may instead be offered because the Justice wants help in crafting an iron-clad decision. However, there was a theme coming from the Justices as well as the lawyers arguing the cases that is noteworthy.

I was struck by the efforts of the opponents of marriage equality to nevertheless insist that they are not hostile to lesbians and gay people. Lawyers for the states that are still clinging to discriminatory marriage laws repeatedly asserted that they respect those couples and hold “no animus” toward them. Justice Alito pointedly asked Mary Bonauto, the lead attorney for the couples, if she really believed the state’s “primary purpose is to demean” same-sex couples. In addition to the political motives for making this claim (which are fairly transparent), there are legal schemes at work here.

Supreme Court precedent holds that “a bare desire to harm” is not a legitimate state interest. So even if the discriminating states get their way on the “level of scrutiny” issue noted above, they could still lose if they can’t point to any legitimate basis for discriminating between heterosexual and homosexual couples. Therefore, they emphasized an historical argument: marriage has “always been this way,” it developed in a time when no one was thinking about gay couples, and so the discrimination wasn’t an intentional act of anti-gay bigotry. This line of argument is an attempt to claim that the state is not acting on “a bare desire to harm,” but rather just maintaining an old practice.

But as I’ve written in these pages before, critiquing Scalia’s dissent in DOMA, the government’s insistence that “we’ve got nothing against gay people” isn’t enough to satisfy rational basis review. Motives aside, the reality is that same-sex couples are being denied marriage rights, and if opponents of equality can come up with no sound reason to continue that discrimination (which they haven’t; the best they can do is suggest that the tradition developed in a way that didn’t have discrimination as its primary motive, which is beside the point in 2015), then the differential treatment lacks rational basis. A “bare desire to harm” is one way to characterize treating people differently without any objectively sound reason for doing so, but the point of that doctrine was to establish that “we just don’t want to” is not a reason the state can rely on to continue discrimination, not to suggest that plaintiffs have to prove that they are victims of personal animosity.

Bonauto movingly argued that laws that exclude same-sex couples from marriage implicitly convey a “stain of unworthiness” and necessarily “encompass a moral judgment.” When advocates for discrimination insist that this is not their meaning, it recalls the infamous Plessy v. Ferguson rationale that arguments that segregation “stamps the colored race with a badge of inferiority” were not based in reality but “solely because the colored race chooses to put that construction upon it.” Maintaining second-class status for same-sex couples is unconstitutional discrimination; it is not “all in their heads” for those couples denied their rights, and the state’s insistence that it means no offense should not be given any weight.

One other theme from today’s arguments worth mentioning is discomfort with the rate of change and what marriage equality might mean for religious freedom. Justice Scalia expressed grave concern that clergy would be forced to perform same-sex marriages or would be denied the right to solemnize any state-recognized marriages if they refuse, although this line of questioning seemed to die when Justice Kagan noted that many Rabbis refuse to marry couples that currently have an established constitutional right to marry, with no legal issues. He also lamented that some marriages might be celebrated at the National Cathedral but would not be welcome at St. Matthew’s (which, he did not mention, is the site of the Red Mass, celebrated the Sunday before the opening day of the Supreme Court term each year and attended by many Justices, to the discomfort of many believers in a separation of church and state). Going further, Michigan’s attorney argued that if the Court were to require states to recognize same-sex marriage, it would be impeding the “liberty interest in deciding what marriage means,” thus casting equality opponents as victims.

Solicitor General Donald Verrilli noted that the rights of LGBT people were long in coming, and sped along by the 2003 decision in Lawrence v. Texas, which struck down sodomy laws and made it possible for people to live in the open. He said LGBT people were finally now able to “lay claim to the abiding promise of the 14th Amendment.” He said that it is “untenable to suggest they can be denied equality while people decide if they are ready.” LGBT people “deserve equal protection of the laws, and they deserve it now.”