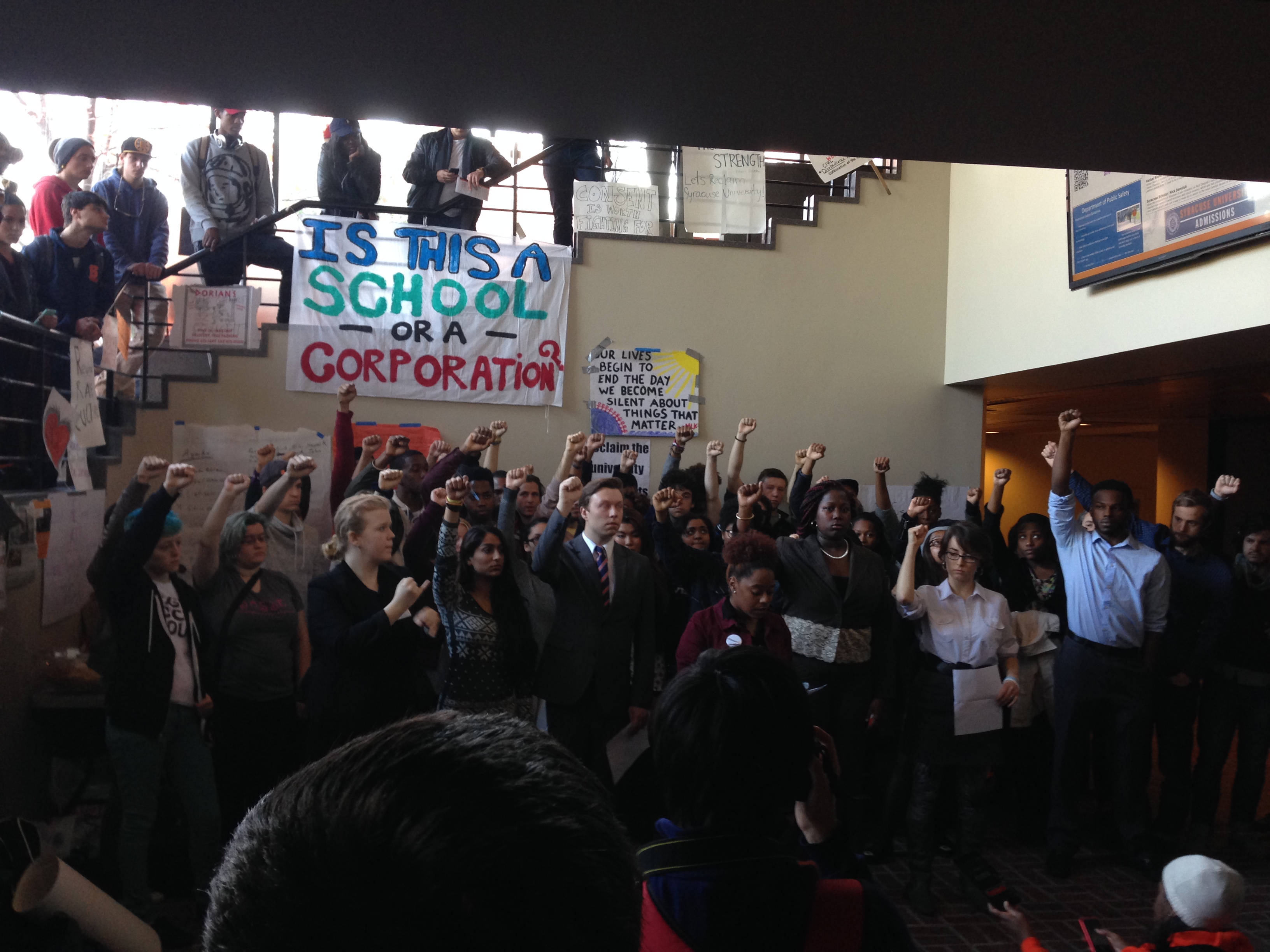 After 18 continuous days of occupying the ground floor of Crouse-Hinds Hall, the main administration building at Syracuse University, THE General Body officially ended the occupation. Protesters are referring to the occupation as Phase 1 of what will be a protracted struggle. Phase 1 ended after the students achieved several concrete victories. Moreover, phase 1 effectively exposed the SU administration's antagonistic position toward students, faculty, and staff. The occupation also ended with increased support from the broader SU community.

Organizers with the ANSWER Coalition at Syracuse University are proud to have been able to struggle alongside so many courageous undergraduate and graduate students. We are inspired and galvanized by this new wave of militant activism, and look forward to Phase 2.

Here, we reprint THE General Body's statement on the ending of the occupation:

Today at 1:30 pm in Crouse-Hinds Hall, THE General Body met with Dean Bea Gonzalez to discuss six urgent student needs that Chancellor Syverud had refused to acknowledge in his “final response” last week. Chancellor Syverud had been personally invited to attend by a delegation of faculty supporters, who delivered an invitation to his home two days ago. He appointed Dean Bea Gonzalez–the former “liaison” between the administration and THE General Body–to go in his place.

During the 1:30pm meeting, it quickly became clear that Chancellor Syverud did not enable his representative to make any decisions on his behalf. “I am not here to speak for the Chancellor,” she said in response to THE General Body’s  six needs. Before the meeting, the Chancellor had received the six synthesized university community needs as a Good Faith Commitment Contract. “From day one this sit-in has asked for commitments from Chancellor Syverud on crucial student needs. I find it unreasonable and irresponsible that the Chancellor would send someone without the power to make any commitments on day 18,” said Ben Kuebrich.

Dean Gonzalez expressed a desire to return to negotiations, but when pressed, was unable to clarify what that would entail in light of Chancellor Syverud’s  “final response.”

After the meeting, THE General Body held a press conference, where senior Colton Jones announced that the sit-in would be ending that afternoon. The decision to end the sit-in follows a growth in campus pressure on the Chancellor to commit to addressing urgent student needs. Over the past week, faculty, alumni, staff, community groups, and campus organizations have written letters to the Chancellor urging him to sign a written commitment to address student needs. These letters also urge the Chancellor to sign a non-retaliation agreement, which would protect students, faculty, staff, and others involved in the sit-in from facing punitive action.

THE General Body ended the sit-in on a strong note, with a clear sense of support from the campus.  “We decided to end the sit-in on our own terms,” said undergraduate student Angelina Vargas. In addition to statements of support from alumni, students, and faculty, THE General Body has received solidarity statements from 1199SEIU, a coalition of Syracuse community groups, Adjuncts United, and Cold Case Justice Initiative and Democratizing Knowledge, among others.

At the press conference, available as audio here, PhD student Tessa Brown reviewed the sit-in’s achievements and how far THE General Body has come. Vani Kannan, PhD Student, discussed the future of the movement. Law school professor Paula Johnson also spoke, expressing her respect and admiration for the students of THE General Body, her belief that they have changed campus for the better, and her commitment on behalf of the faculty to stand with them as the movement continues into next semester.

Following the press conference, students clapped, hugged, gathered their belongings, and exited the building. Carrying signs that read ‘Coming Back Stronger,” they marched with a delegation of faculty and staff up to Hendricks Chapel, where DAT Rally was held nearly three weeks ago. After saying final goodbyes, many students returned to Crouse-Hinds to clean the building.