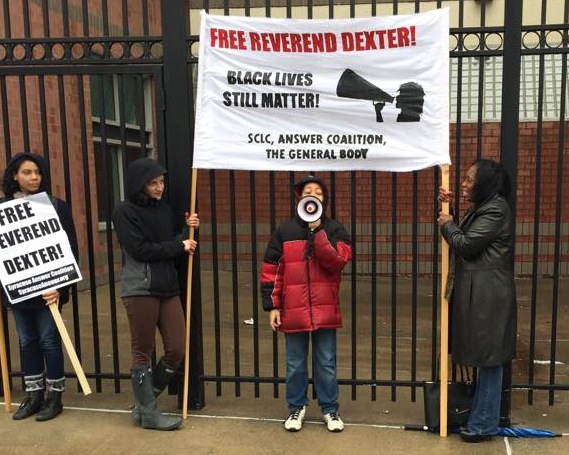 In response to the jailing of local community and religious leader Reverend Lemorris Dexter, students and members of the Syracuse community held a spirited protest in downtown Syracuse on April 10. Over 30 people braved the cold, wind, and rain to rally in solidarity with Rev. Dexter outside of the Onondaga County "Justice" Center.

On Jan. 4, 2014, Rev. Dexter and his wife, Alisha, called 911 to report intruders on their property. When police arrived, they instead arrested the Dexters, but only after roughing them both up, and beating on Alisha. One officer threw Alisha against her porch, and then continued to beat her once she was on the ground. When Rev. Dexter objected, another officer told him, "It looks like the b**** is resisting." You can read details of and background on the arrest here.

Then, on March 20, 2015, Rev. Dexter was convicted of "obstructing governmental administration." Since that day he has been held without bail awaiting sentencing, which is scheduled for April 13.

Derek Ford of the Syracuse Answer Coalition addressed the crowd first. After relaying the details of Rev. Dexter's arrest and trial, he highlighted the reason behind this mistreatment: "Rev. Dexter knows that the real criminals aren't in the local jail, but that they are in the bank boardrooms, they are in City Hall, and they are in the Pentagon. And he isn't afraid to say that wherever, whenever, and to whomever it needs to be said."

Alisha spoke next, thanking the crowd for supporting her and her husband. She assured everyone that Rev. Dexter has been continuing his fight for justice inside the jail, speaking with young people and letting them know ways they can get involved in the struggle.

Finally, Vani Kannan spoke on behalf of THE General Body, a student group at Syracuse University. "Rev. Dexter has been so supportive of the students, and so we're here in solidarity. We're all committed to fighting racism, we're committed to fighting police brutality, and we admire what the movement is doing in Syracuse."

"And, on a personal note," she continued, "I just want to say my family's from India and there are people in New Delhi marching with 'Black lives matter' signs. The whole world is watching."

As protesters were getting ready to leave, they heard Rev. Dexter shout out from the second floor of the jail: "No justice, no peace!" Rev. Dexter continued to lead chants for several minutes from the jail.

Laura Jaffee, an SU student and one of the rally's organizers, commented on the student presence at the rally, saying  that she thinks "it indicates that students are able to connect the dots and see how seemingly disparate injustices are really related. There's been such impressive coalition-building this year, both between different student groups and, increasingly, between students and the broader Syracuse community. There's clearly a mutual interest in joining together to resist a wide range of interconnected injustices and the students present at today's rally made that particularly evident."

Rev. Dexter's sentencing is April 13 at 9:00 am in the City Courthouse, and the public is encouraged to attend.