Trump Must GO! Rally in front of White House to demand justice for immigrants

The ANSWER Coalition urges its supporters to attend the following demonstration organized by the 1804 Movement for All Immigrants and Equality for Flatbush: E4F 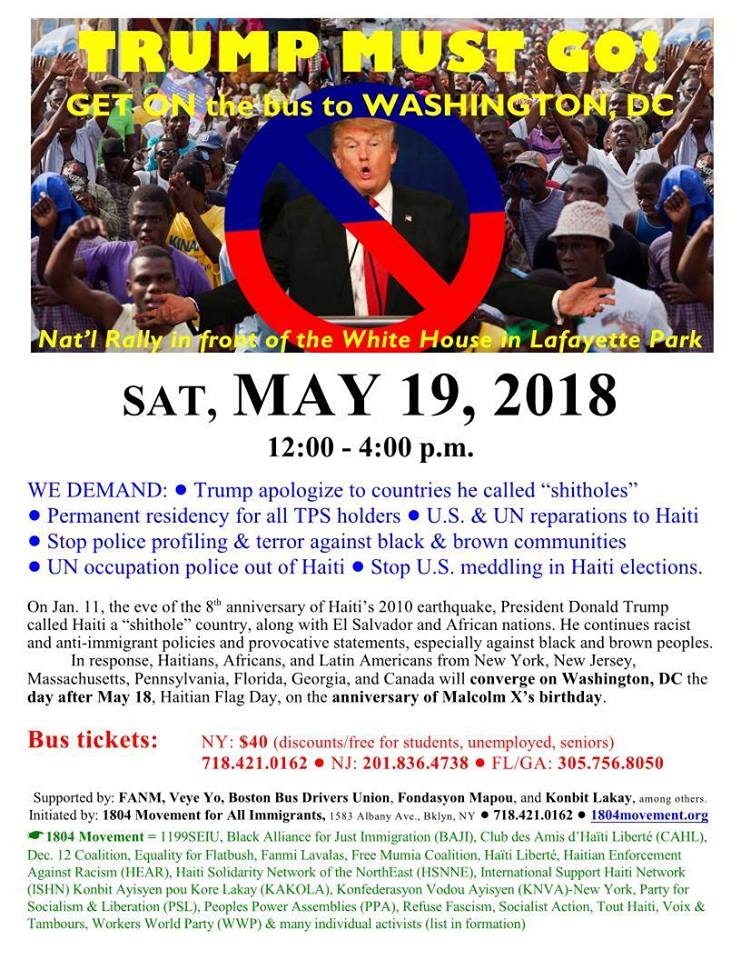 On Jan. 11, the eve of the 8th anniversary of Haiti’s 2010 earthquake, President Donald Trump called Haiti a “shithole” country, along with El Salvador and African nations. He continues racist and anti-immigrant policies and provocative statements, especially against black and brown peoples.

Last week, the Trump administration stripped Temporary Protected Status (TPS) from 57,000 Hondurans who have lived in the United States for the past two decades. Those Hondurans have about 53,000 U.S.-born children, many of whom may also be forced to return to Central America with their parents.

In response, Haitians, Africans, and Latin Americans from New York, New Jersey, Massachusetts, Pennsylvania, Florida, Georgia, and Canada will converge on Washington, DC the day after May 18, Haitian Flag Day, on the anniversary of Malcolm X’s birthday.

The May 19, 2018, demonstration will take place from 12:00 to 4:00 p.m. in front of the White House to demand permanent residency in the U.S. for the tens of thousands of TPS holders soon to be facing deportation. Their expulsion is inhumane and counter-productive. They hold jobs, run businesses, attend schools, pay taxes, and generally contribute to the economic health of the U.S..

The rally will also demand that President Donald Trump apologize for calling Haiti, El Salvador, and African nations “shithole countries,” that U.S. police forces stop profiling and terrorizing black and brown communities, that UN police be withdrawn from Haiti, that the U.S. and UN pay reparations to Haiti for a century of crimes and exploitation (most recently the UN’s importation of cholera into the country), and that Washington stop meddling in Haiti’s elections.

You can also visit the 1804 Movement for All Immigrants’ website at 1804movement.org or its Facebook page at www.facebook.com/1804Movement.