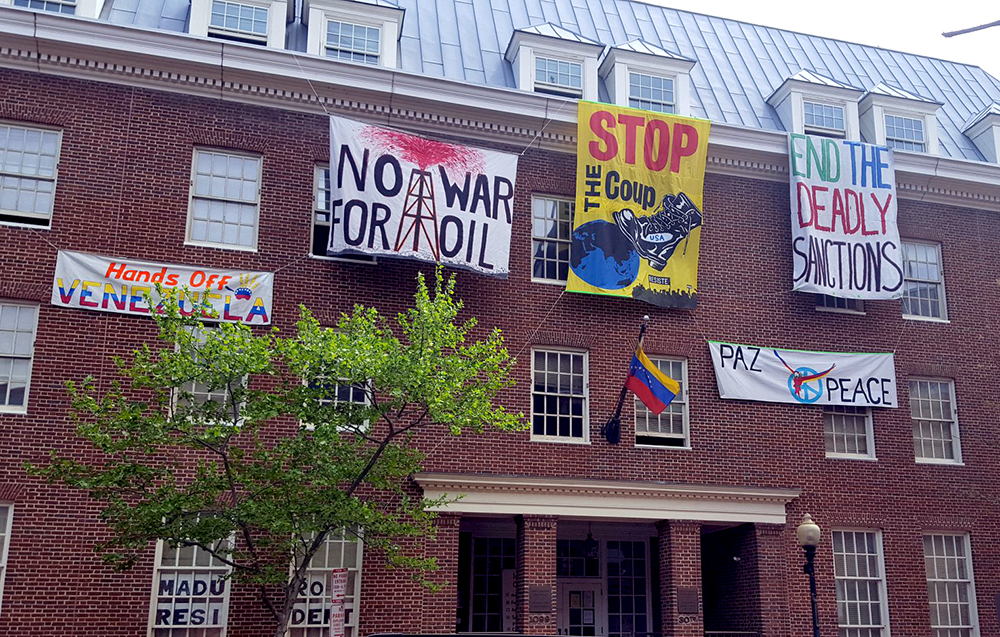 People from all over the United States came to Washington, D.C. and joined together last night at the Venezuelan Embassy in a powerful demonstration of solidarity with the people of Venezuela. While banners were hung from outside the windows of the Embassy, people held a night of political education and tactical discussions. The ongoing Embassy Protection Collective continues to prevent the U.S. government from illegally seizing the Embassy of Venezuela in Washington, D.C.

The Embassy building, located in Georgetown, is owned by the Venezuelan government and is a protected international compound by the Vienna Conventions. Progressive activists have been working and living inside the Embassy as invited guests for weeks.

The Embassy Protection Collective was initiated by CODEPINK and Popular Resistance, and the ANSWER Coalition has been mobilizing support for this effort in Washington and around the country. Many ANSWER volunteers and organizers are inside the Embassy.

“The people inside this Embassy are here at the invitation of its lawful owner, the Government of Venezuela,” said ANSWER’s National Director Brian Becker. “The Trump administration is acting as the world’s number one international pirate as it seizes Venezuelan assets, properties and diplomatic compounds. In pure colonial fashion, U.S. and European entities have grabbed hold of Venezuela’s oil revenue, gold reserves and bank accounts — while openly championing the Monroe Doctrine. We are joining with the people of the world to declare that the days of the Monroe Doctrine are over.”

Becker continued, “Any action to evict the Embassy’s current tenant guests by the MPD, Secret Service or other police agencies would be an illegal and unlawful arrest under both D.C. and international law. What we are doing here in this Embassy is not an act of civil disobedience. International law and D.C. law are on our side. The violator of these laws — the criminal in this case — is none other than the Trump White House and the U.S. State Department.”

A letter was sent last night from the Embassy Protection Collective, with the assistance of lawyer Mara Verheyden-Hilliard of the Partnership for Civil Justice Fund, to the U.S. State Department:

Members of the Embassy Protection Collective are writing to make it expressly clear and ensure all personnel are put on notice that any arrest of persons inside the embassy would constitute an unlawful arrest. We understand from our communications with your office that you are threatening to arrest persons inside the Venezuelan embassy.

Not only are we here at the invitation of persons lawfully in charge of the premises but we are also here as people with lawful rights under Washington, DC tenancy law.

It is our intention to hold responsible any person who orders or effectuates any unlawful actions against us.

We have received no eviction notice and due process opportunity to challenge any attempted eviction as is required by law.

[VIDEO: Eyewitness Venezuela Webinar. If you missed Saturday's informative webinar with anti-war leaders and journalists, or want to re-watch it, the whole thing has been posted here. Please share with friends and family to get out the truth about Venezuela!]

Here is the address to the Venezuelan Embassy: